The manager of a London pub has blasted a diner who left a savage review on TripAdvisor criticising the eatery’s roast.

According to the reviewer 963shanthib, their meal at The New Inn in Ealing was not enjoyable, despite the pub enjoying an average 4.5 star review, and being ranked 190 out of 2,095 pubs in London.

The one-star review, which also complained about being served cabbage instead of a ‘proper’ green vegetable like broccoli, prompted manager Fiona to hit back at the reviewer, pointing out that it is ‘always an idea to let us know if there’s a problem at the time’, and that broccoli could have been offered as a cabbage replacement if requested.

Writing up their thoughts, the reviewer said: ‘I last went for a Sunday roast at this pub many years ago and remember how much I enjoyed the meal. I was disappointed when I arrived there that there was longer a carvery, where previously you could be served with a generous portion of various roasted meats and vegetables. 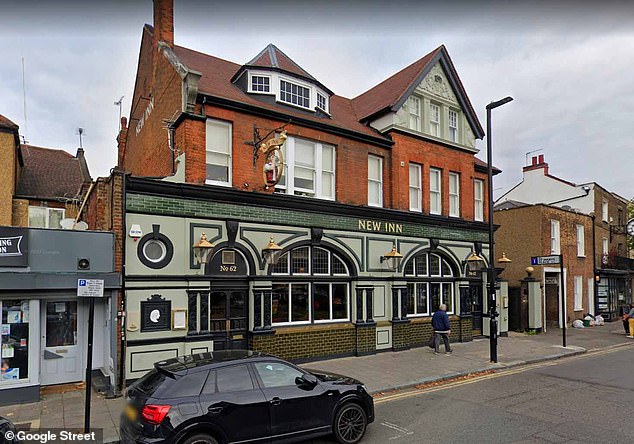 The manager of the New Inn Pub in Ealing (pictured) has hit back at a one-star review which criticised its roast dinner, saying the gravy was ‘watery’ and cabbage isn’t a ‘proper’ green vegetable

‘Alas, that was no longer the case. Apparently the pandemic had done away with all that. That I can understand.

‘However what was unacceptable was the the dry, tasteless chicken, the watery gravy and cabbage instead of a decent green vegetable (such as broccoli) that we were served with.

‘This was a birthday treat for a friend and it was a disappointing experience for both of us. The waitress who removed our plates didn’t even bother asking us how the meal was.

‘Perhaps she knew what my answer was going to be. It would be no surprise to say that I won’t be going back here to have a meal, which is a shame since the pub itself is lovely with a great garden.’ 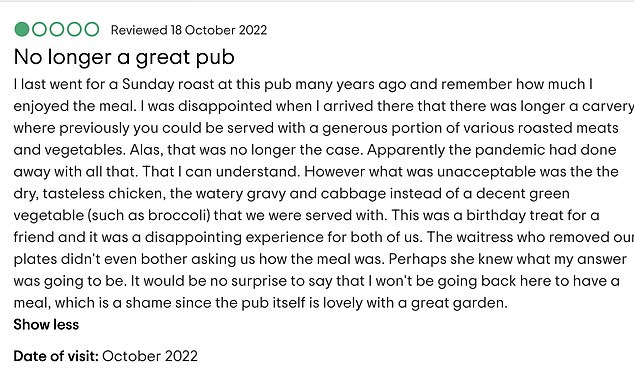 In response, the pub manager wrote: ‘Always an idea to let us know if there’s a problem at the time, we can then seek to rectify the issue, for example if you would have liked to have some broccoli, we could have certainly provided it, or if you personally prefer a thicker gravy, we could have sorted this, no problem.

‘We seek to provide the best possible experience for our guests, it’s unfortunate you didn’t tell us at the time as I’m confident my dedicated team would have made every effort to assist you.

‘Our roast dinners are served with various roasted meats, chicken, pork & beef. Vegetables are roast potatoes, swede mash, carrots, parsnips and seasonal greens, we no longer serve a carvery, which has been the case for several years, we’re proud of the food we serve and regret that you didn’t enjoy your meal on this occasion.

‘We are fortunate enough to be fully booked on Sundays with an additional waiting list in place, so confident were doing something right in the main. 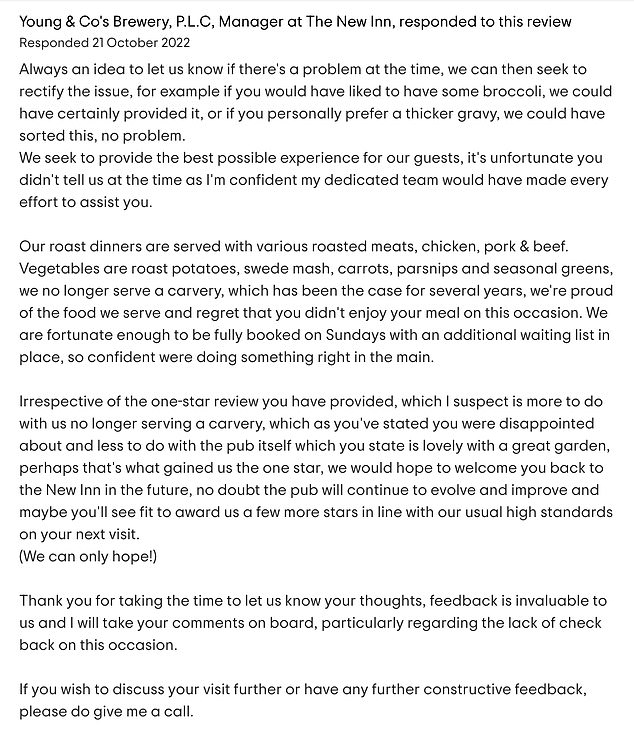 However, the pub’s manager did not take the criticisms sitting down, and said the reviewer should have said something sooner

‘Irrespective of the one-star review you have provided, which I suspect is more to do with us no longer serving a carvery, which as you’ve stated you were disappointed about and less to do with the pub itself which you state is lovely with a great garden, perhaps that’s what gained us the one star.

‘We would hope to welcome you back to the New Inn in the future, no doubt the pub will continue to evolve and improve and maybe you’ll see fit to award us a few more stars in line with our usual high standards on your next visit. (We can only hope!).’

Among the positive reviews is one which says: ‘Visited The New Inn in Ealing for Sunday Lunch again today and my expectation was surpassed! Amazing food, amazing service. Will definitely be continuing to come here! Thank you!’

Despite the less than enthusiastic one-star review left by the diner, a slew of others have heaped praise on the pub

Another diner agreed, adding: ‘We held a work event in the outside covered area, the food and service were fantastic, the team were very accommodating to the needs of everyone at the table, dietary etc. They even gave us extra portions as it was end of service, and some did bits for the dogs 🙂 We will definitely book for future events and recommend to other businesses looking for a venue.’

And a third said: ‘Absolutely great time had here by all, staff were brilliant and the manager was very nice and helpful, food was lovely. My father is in a wheelchair and we felt that everything he needed was never a problem so me and my family will definitely be coming back again.. plus the Guinness is excellent!’

‘I am not entering a discussion with a non-connoisseur’: Restauranteur blasts Tripadvisor reviewer who criticised his ‘watery’ food and said the WC looked like a ‘public toilet’

The WILD film that will make you laugh, cry, gag… and crave a cheeseburger: Audiences go gaga for Ralph Fiennes’ VERY dark comedy The Menu – hailing it the ‘most interesting movie ever made’ in rave reviews