A man aged in his 30s is one of 12 coronavirus deaths in the past 24 hours, as Victoria recorded 466 new cases, marking the third day in a row of cases in the 400s.

Six of those 12 deaths are linked to aged care. There are now 193 Victorian deaths in total.

Victorian Chief Health Officer Professor Brett Sutton said while the state is "clearly" seeing some stabilisation in the numbers, he is still unhappy with the current numbers.

"That is not good enough but it's a positive that we have averted an exponential increase through the last couple of weeks."

Dr Sutton said that the introduction of stage three restrictions has averted 20,000 or more cases.

"But we can't have 500 cases every single day and the associated morbidity, hospitalisation, intensive care requirements and debts that are associated with that number every day." 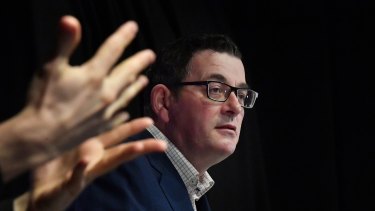 Dr Sutton said stage four restrictions, that only came in days ago, won't make a difference on the numbers for "another week or more".

He highlighted one of the main challenges for the government was still aged care and hospitals.

"We know aged care is particularly vulnerable, we have over 1600 active cases in aged care at the moment," he said.

He's also highlighted the vulnerability of people in disability care settings and a need to protect that sector from outbreaks.

"Even though the numbers are significantly less than in aged care, it needs the same coordinated and rapid response."

There are now 636 Victorians in hospital, 44 receiving intensive care and 29 of those 44 are on ventilators.

There are 2584 cases in total with an unknown source, an increase of 130 since yesterday.

Mr Andrews said 29,783 coronavirus tests have been processed in the last 24 hours.

Mr Andrews has announced a further 140 healthcare workers who have tested positive to COVID-19, bringing the total number of active cases in that cohort to 998.

The total number of active cases in the state is 7808.

"So that is two very different sets of circumstances of those settings".

The Age and Sydney Morning Herald revealed on Saturday that a senior Department of Jobs official has been shifted from their role amid evidence that the decision to use private security guards at Melbourne’s quarantine hotels was partly driven by a well-meaning attempt to provide jobs under "social inclusion" policies.