Luis Garden Acosta, who stopped just short of becoming a priest and then a medical doctor and instead organized an innovative program to restore the spirit and health of his community, died on Tuesday at his home in Brooklyn. He was 73.

His wife, Frances Lucerna, said the cause was degenerative lung disease.

Mr. Garden Acosta and Ms. Lucerna founded a community organization, El Puente (the Bridge), in 1982 with the goal of combating gang violence among teenagers in Williamsburg, in northwest Brooklyn, which was then a mostly poverty-stricken neighborhood where Hispanic and Hasidic Jewish residents competed for scarce housing.

“When I started El Puente, I felt like a bridge between my colleagues on the left, who would never be caught dead in church, and progressive Christians,” Mr. Garden Acosta told The New York Times in 2009. “I wanted to create a ‘bridge.’ ”

Mr. Garden Acosta, Ms. Lucerna and Eugenio Maldonado convened clergy, educators, community leaders, health providers and artists around the mission of the Young Lords Party, a radical Puerto Rican group, and of the Young Christian Workers Movement, which was founded to unite the Roman Catholic church and organized labor with a common agenda.

The organization established an alternative public high school, El Puente Academy for Peace and Justice, with Ms. Lucerna as its director; founded a Green Light District to ameliorate the more recent gentrification of Williamsburg’s predominantly Hispanic South Side section, which many residents call Los Sures, by promoting arts and culture and reserving open space for residents; and joined with the United Jewish Organization and other groups to establish a local Community Alliance for the Environment, which successfully lobbied against a proposed city incinerator nearby. 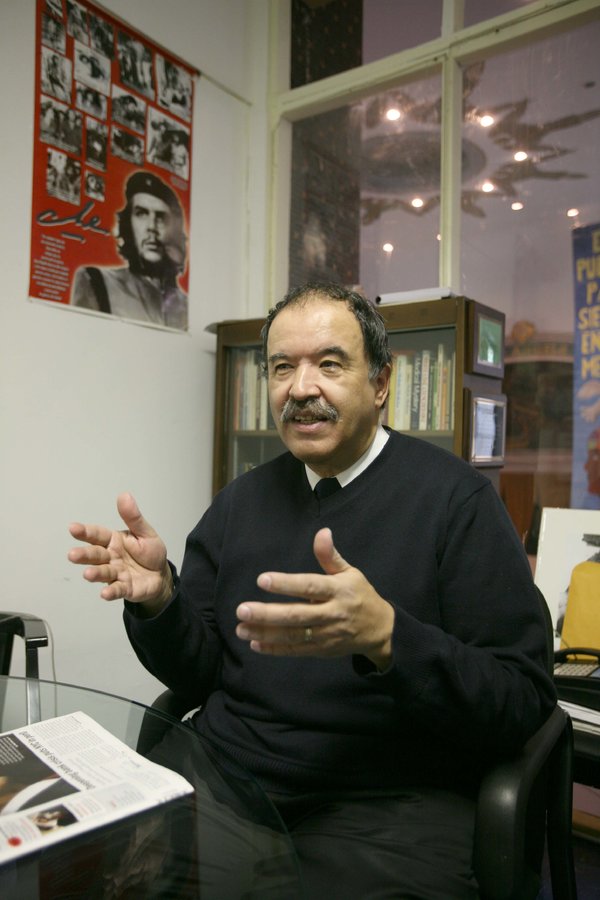 “I can remember walking through the shell of an empty church in Los Sures with Luis,” Martin Espada, a poet (and a Pulitzer Prize finalist in 2007) who has taught at the University of Massachusetts, Amherst, recalled in an email.

“He spread his arms and told me about everything that would happen in this empty space,” Professor Espada added, mentioning English as a Second Language and karate classes. “I thought he was crazy. It became El Puente.”

Still, the group’s Academy for Peace and Justice has come under some criticism.

“El Puente’s teachers and administrators are clearly well-meaning,” the lawyer and commentator Heather Mac Donald wrote in 1998 in City Journal, published by the conservative Manhattan Institute, but she found fault with its curriculum, which offered, she wrote, “courses in ghetto culture — of which Hip-Hop 101 is an extreme example — that reinforce the parochialism of inner-city kids rather than open their minds to broader intellectual worlds.”

This week, Rep. Nydia Velázquez, Democrat of New York, described Mr. Garden Acosta on Twitter as “a strong advocate of civil rights, education, our youth and the importance of advocating” for measures to counter climate change.

Luis Patrick Garden Acosta was born on March 17, 1945, in Fort Greene, Brooklyn. His father, Luis A. Garden, was Dominican. His mother, Maximina Garden Acosta, was born in Puerto Rico. She became a social activist herself after a fiancé was killed in a police massacre of peaceful Puerto Rican nationalist marchers in Ponce in 1937. She later helped smuggle undocumented immigrants from the Dominican Republic to New York, where she found them jobs in the factory where she worked.

One of Mr. Garden Acosta’s first encounters with racism was when he was 9. Accompanying a black friend visiting the friend’s grandmother in Virginia, Luis was thrilled to discover that a science fiction film they had missed in Brooklyn was playing at a local theater. The friend warned him away, however, because the theater was racially segregated.

“How could it be true that I was brown and couldn’t go somewhere?” he told The Daily News in New York in 1999. “I was so hurt. I can still feel it. I was angry. I was sad. Something pierced my soul.”

When he was 15, he enrolled in St. Mary’s College, a seminary in North East, Pa., with the goal of becoming a priest; he later earned his college degree there. (The college is now the North East Campus of Mercyhurst University.)

A memorial to those who lost their lives in 2018

During subsequent silent retreats, he recalled, he was troubled when he learned that the seminary’s Redemptorist order had acquiesced in running segregated parochial schools in the South, and he was inspired to pursue social advocacy, he said, when he heard the Rev. Dr. Martin Luther King Jr. on television.

He returned to Brooklyn without having taken his vows, enlisted in anti-Vietnam War protests and the Catholic Worker Movement and, in 1969, joined the Young Lords Party, whose members had been arrested after they commandeered an East Harlem church to distribute food and clothing to the poor.

Mr. Garden Acosta was a community organizer for the city under Mayor John V. Lindsay’s administration in the late 1960s, enrolled in Harvard Medical School in 1970 and attended it for several years, worked as a drug counselor in Amherst, and presented a radio program in Massachusetts on health. (He called himself “the nation’s first public health disc jockey.”)

In addition to Ms. Lucerna, who was a professional dancer and founder of the Williamsburg Arts & Culture Council for Youth, he is survived by their daughters, Arianne Garden Vazquez and Raisa Garden Lucerna; and his sister, Lynda Garden Calderon.

After returning to Brooklyn from Massachusetts in 1980, he became the director of community medicine at the municipally owned Greenpoint Hospital, where, in the emergency room, he recalled, “the young people would come, mostly dead on arrival.”

“One weekend I decided to figure out if there was some way we could save their lives,” Mr. Garden Acosta added, in the Times interview. “And you know, as God would have it, it was maybe a half an hour into my weekend when a young woman was brought in, 19 going on 20. Her name was Sugar. They tried to resuscitate her.”

They tried again, but with no response

The young woman didn’t make it.

“The doctor had to go out into the hallway and tell the young woman’s husband that she had died,” Mr. Garden Acosta said. “I still remember, because it haunts me, the cries throughout that hallway: ‘How can it be? What do I tell my daughter?’ And I started crying. And that’s when I decided that this would end.”