Former state cabinet minister Marlene Kairouz has been asked to explain why she shouldn't be expelled from the Labor Party, after she was implicated in a branch-stacking scandal that ultimately cost her and two other ministers their jobs on the Andrews government frontbench.

Ms Kairouz is the most high-profile Labor figure to be issued with a show-cause notice by party elders Steve Bracks and Jenny Macklin tasked with reforming the ALP, stamping out branch stacking, and purging fake members by January 31. 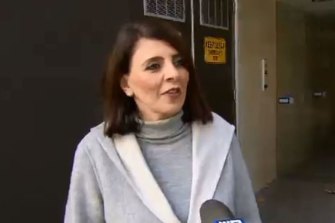 Former cabinet minister Marlene Kairouz needs to tell the Labor Party why she should not be expelled. Credit:Nine

If Ms Kairouz is unable to prove she is a genuine member, she will be expelled from the party and be forced to sit on the crossbench as an independent MP, which is likely to end her career in politics after the next election.

A senior Labor source aware of the investigation, first reported and uncovered by The Age columnist Jon Faine, said the former ALP powerbroker responded to the show cause notice but had not addressed all the issues it had raised. The source said she had denied any impropriety.

In a statement issued late on Wednesday, Ms Kairouz said her responses to the administrators were prepared "in good faith" and with the intention of assisting the inquiry without compromising a simultaneous IBAC investigation.

“Having decided to respond, I was advised by my legal representatives to be succinct to avoid inadvertently impeding the IBAC inquiry.”

She said the ALP was not accusing her of branch stacking.

"I am disappointed that my attempts to cooperate with this investigation have not been been interpreted as such," she said.

Ms Kairouz, along with former cabinet minister and factional allies Adem Somyurek and Robin Scott, are under investigation by IBAC and the Victorian Ombudsman over claims they supported industrial-scale branch stacking of the Labor Party by using parliamentary and ministerial staffers paid from the public purse.

All three ministers have previously denied allegations of misconduct, first exposed by The Age and 60 Minutes in June last year.

Branch stacking involves powerbrokers organising large numbers of people, often from ethnic groups, to join the party to influence key ALP processes, including preselections for federal and state seats. In some cases, the people are not even aware they are party members.

During the meeting, Ms Kairouz is recorded describing as "excellent" the use of taxpayer-funded parliamentary officers to run the operation and directs them to challenge any attempts by Labor’s Left to weed out branch-stacked members

The potential departure of Ms Kairouz from the party entrenches a deeper power vacuum inside the ALP, and potentially causes a further headache for Premier Daniel Andrews, of the Socialist Left faction, who expelled Mr Somyurek from the parliamentary party and was scathing of his conduct.

Mr Somyurek appeared at Parliament for the last sitting week and, using parliamentary privilege, accused the Premier of branch stacking in Melbourne's south-east in the 1990s.

The months-long internal investigation by Ms Macklin and Mr Bracks has come under a cloud after some alleged fake members were found to be gaming the audit process conducted by Deloitte, according to a senior Labor source.

The clean-out had also proved divisive among some members of the Labor Party late last year, with some senior sources speaking on the condition of anonymity at the time saying it had not gone far enough, and others said the focus on Mr Somyurek's activities had given cover for powerbrokers in the Left and non-Somyurek-aligned part of the Right faction.

Mr Bracks and Ms Macklin published their review into the ALP in late November and found the party's branch-stacking woes went far beyond one factional warlord, and that the practice was able to thrive in an environment of organisational inertia, a poor culture and almost no party governance.