Nationals leader Barnaby Joyce has assured his colleagues they will have the final say on any federal government decision to support a net zero emissions target as momentum builds within the Coalition towards adopting a 2050 commitment.

While several Nationals MPs remain steadfastly against the federal government lifting its climate targets, phasing out coal or promising a firm deadline for net zero, former cabinet ministers Michael McCormack and Darren Chester have urged their colleagues to ensure they help negotiate any deal rather than simply vetoing it. 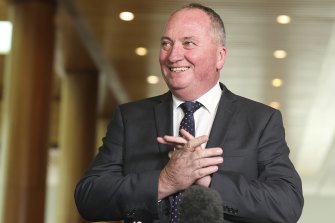 Prime Minister Scott Morrison is expected to settle on the government’s climate strategy next month ahead of the critical United Nations COP26 summit in Glasgow in November. He told United States President Joe Biden in New York this week his government was working through its own “Australian plan”, which would be settled in the coming weeks.

Mr Joyce’s ascension to the Nationals’ leadership in June was viewed as a referendum within the party on the net zero target, however, the Deputy Prime Minister said he was seeking the best deal for regional Australians, blue-collar jobs and export industries.

He said on Wednesday evening the current gas crisis in Britain was a cautionary tale to any energy policy and a reminder of the risk to any nation if there was an incapacity of renewables to fill the void left by fossil fuels.

Mr Joyce said he would not publicly speculate on his deliberations with Federal Energy Minister Angus Taylor and acknowledged there were “wide-ranging” views within his party room.

Any government decision would need the majority of 21 Nationals MPs to support it, with several party sources conceding it was still not clear which way the numbers would fall. Mr Joyce is said to be driving a hard bargain with his cabinet colleagues, with one saying he was demanding “bucket loads of cash for the bush” to justify any agreement.

The Queensland faction of the party, including Senator Matt Canavan and outgoing MPs Ken O’Dowd and George Christensen, has been the most vocal against lifting Australia’s emissions targets at the expense of coal jobs within their state.

But Mr McCormack said while regional economies, including the resources sector, needed to be protected, the Nationals “have to be around the table working out a position”.

“If every other country who are our allies in trade and other things are saying we should be at net zero, then Australia will really need to consider its position,” he said.

He said if Australia did not commit to net zero, many lucrative trade deals could be made obsolete in the coming decades, depriving Australian farmers of critical market access.

“It would be madness for regional communities and the agricultural sector to rule itself out of a net zero conversation prematurely when there could be opportunities for increasing sustainability by being part of the solution,” he said.

Fellow Victorian Nationals MP Damian Drum said the party needed an approach that “balances the undeniable need to act on climate change” while ensuring the needs of industry and the impact on household budgets were “not upended”.

Resources Minister Keith Pitt, who has been privately sceptical of net zero, hit back at “overseas organisations and academics” he says want to determine Australia’s domestic policies on critical sections of the economy, particularly resources.

The Nationals MP said the government should not put at risk an industry that directly employed more than 50,000 Australians, supported the jobs of another 300,000 and generated about $50 billion in exports.

“Our thermal coal is providing the reliable and affordable electricity many developing nations throughout Asia are looking for to provide the services, we take for granted and help lift their people out of poverty,” Mr Pitt said.

He said while New Zealand was portrayed as an “international poster child for the ‘clean and green’ economy”, it was importing a record amount of thermal coal to cover shortfalls from its hydro- and gas-generated power.

“As New Zealand is discovering, while intermittent energy sources like wind and solar will have an important role to play, coal remains one of the few electricity sources that can provide the reliable, dispatchable power a modern economy needs,” he said.

The Reserve Bank of Australia said last week coal exports could plunge by as much as 80 per cent if China, Japan and South Korea took an aggressive approach to decarbonising their economies by mid-century. But it found a pivot to net zero would impose only a relatively modest hit to economic growth – about 0.1 percentage points from annual gross domestic product – if it was replaced by exports such as green hydrogen and green steel, as well as rare earth minerals.