Deputy Prime Minister Barnaby Joyce says Australia must not show naivety towards an olive branch extended by Beijing’s new ambassador, warning there must remain a number of non-negotiables in the relationship.

Xiao Qian, who most recently served as China’s ambassador to Indonesia, arrived in Sydney last week and issued a public statement that ties between Canberra and Beijing were at a “critical juncture”. He said the relations were facing many “difficulties and challenges” as well as “enormous opportunities and potential”. 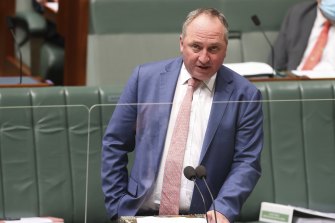 Mr Xiao said he wanted to eliminate misunderstanding and suspicion within the relationship and push the China-Australia relations back on the right track.

Speaking on Sky News Australia on Sunday, Mr Joyce said he welcomed any approach by China that wanted to “tone things down a bit”.

But he said that would always be balanced with Beijing’s actions such as economic coercion, assertiveness in the South China Sea, freedom of media in Hong Kong and human rights issues such as the treatment of tennis star Peng Shuai. The wellbeing of Peng, a Wimbledon doubles champion and former world No.14 singles player, has been a concern for weeks after she alleged a former Chinese vice-premier, Zhang Gaoli, had sexually assaulted her.

“Yes, I want there to be peace, but I will do it with eyes wide open and making sure we have a harmonious relationship,” Mr Joyce said. “But not in a frame of naivety.”

The government has sharpened its attacks on Labor over its past statements on China relations, increasing pressure on Opposition Leader Anthony Albanese to outline how he would manage dealings differently.

Labor has faced internal pressure over how to deal with China, with outspoken party elders Paul Keating and Bob Carr fiercely critical of the federal government’s approach to Beijing.

Mr Joyce said Mr Albanese should be calling on China to remove the more than $20 billion of tariffs imposed in response to various Australian moves including calling for a global inquiry into the origins of COVID-19 and banning Chinese telecom giant Huawei from its 5G rollout.

“If you’re going to remove exemptions, remove the lot. What exemptions, Mr Albanese, do you believe need to stay in place? When you wash the dishes, do you just wash some of them? You know, get half-dressed? It’s not what we do,” Mr Joyce said.

“We want to get back to our normal economic relation, then we can’t have China sort of arbitrarily putting bans on products when we haven’t actually broken any laws.”

Dr Chalmers said Australians would see it as a “pretty shoddy attempt to distract from the government’s own failures”, including its economic record.

“Anthony Albanese was asked about this during the week, he answered it as a real prime minister should. He said China’s becoming more aggressive and more assertive, we want to see those trade sanctions withdrawn, and we don’t want to play politics with such an important relationship when our national economic interest is at stake here and at risk here. That’s how a real leader deals with this issue,” Dr Chalmers told the Nine Network’s Weekend Today.