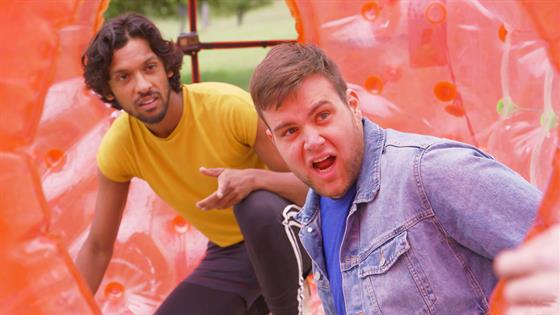 The brave singles have just recently met (like, earlier today) but they’re already brushing elbows inside an enormous and not-quite-sealed inflatable tube. Per coach’s instructions, its passengers are expected to navigate the outdoor terrain using only their hands, feet and whatever additional appendages become necessary.

“I’m sorry, someone is ending up with stitches here,” gasps comedian Kelsey Darragh, and co-commentator Zach Noe Towers agrees “this is a horrible idea.”

But Josh and Govind are already off to the races, tumbling through a grassy park with alarming momentum and no route to speak of.

“Did I kick you in the head?” Josh asks his match once the contraption has finally stopped rolling.

“No, no, no, no,” Govind says first. But after taking a second to think about it, he admits a knock to the rib was definitely possible. No stitches, though!

At least not yet. Turning somersaults in the synthetic cylinder is hardly part one of the duo’s increasingly tactile first meeting, though. Next, they’re asked to slide into protective “bubble suits” and “mercilessly bounce into each other” until someone topples over.

The clip cuts off before one half of this adventurous pairing is declared winner, but feel free to take a guess after checking out the full video above!

Watch a brand new episode of Dating #NoFilter Tuesday at 11 p.m., only on E!