There came a time when I realised that my children did not know how to use cutlery. Sure, they could shovel with a spoon, but when it came to eating larger items in the conventional manner, by cutting them up with a knife and fork, they had no idea.

I had a similar shock recently when I texted my son, asking him to take the clothes out of the washing machine and put them in the dryer, and he replied with the question “Where’s the dryer?” The moral being that there are some things that seem so obvious, so basic, a parent might forget that they need to be taught.

Of course, there are some lessons you try desperately to impart to your children, but fail to be absorbed. The principles of basic hygiene, for example.

When he was little, my son was simply marched off to the bath whenever my husband and I deemed it necessary. We washed his hair and selected his clean clothes, standing over him each night as he brushed his teeth. Cleanliness wasn’t up to him, and so he stayed pristine. But now he’s 13, and supervising his bathing would be both impractical and profoundly creepy. So he’s been left to his own devices. And it turns out that those devices are filthy, indeed.

I implore him to shower regularly, to wash and brush his hair and to use deodorant, but he insists that he doesn’t smell and so needn’t waste his time with all that. Even when I wave his undies under his nose and see him recoil, he refuses to change his ways. He says it doesn’t matter, because he doesn’t care if he smells.

There have been some successful interventions. My son’s history teacher, a stern but fair woman, proposed that she’d make him a cake if he’d just wash and brush his hair. The novelty of this offer was enough to get him scrubbing, and when he arrived at school with sweet-smelling locks she kept her promise, baking him not only a cake but biscuits too. But that was months ago, and his hair has since reverted to a nest-like mess, a degustation-style tasting-plate of all the meals he’s eaten over the past fortnight, samples of which are perfectly preserved in his long, droopy fringe.

I’ve heard similar laments from other parents with sons his age. We compare notes on how long it’s been since our long-haired boys have bothered shampooing, marvelling at how they can be so oblivious to their own BO. But in the main, their filthy behaviour is laughed off. After all, eye-roll, boys will be boys, and a certain amount of slobbishness is to be expected.

Yet I’m sure things will be very different for my daughter when she reaches adolescence. Because for teenage girls, indeed, girls of any age, being dirty and unhygienic is no laughing matter. 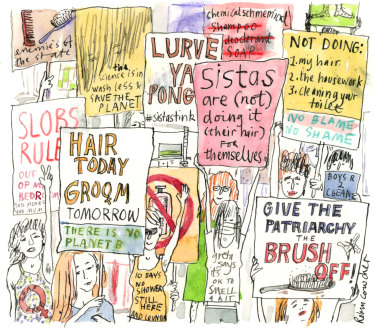 When I was a teenager, my peers and I worked tirelessly to eradicate any olfactory hint that we were, in fact, living, organic beings. The change rooms at school were thick with the chemical smell of spray-on deodorant, which we’d blast not just into our armpits but all over our bodies. Cheap perfume was also splashed about liberally, and our hair was brushed with Marcia Brady-like enthusiasm. There were special products that you could spray on your vulva, in case, heaven forbid, it smelt like a vulva. We never wondered why there were no similar products for boys, whose genitals, presumably, also smelt like genitals.

Later, when I left home and moved into a share house, it was simply assumed, and accepted, that our male flatmates would have poor personal hygiene. And so it was the women who’d do most of the housework, just as it is in households today. Because if the place was dirty, or smelled bad, it was the women residents who would be blamed and shamed.

Of course, #notallmen are filthy and smelly, and I hope that my son will outgrow his anti-hygiene philosophy. But if he doesn’t, I know the world will be far more tolerant of his grottiness than it would be if his sister went down a similar path.

Given such inequity, I wonder whether it’s time we added this to our list of feminist demands: the basic human right to be a slob. In light of the smell in my son’s bedroom, I never thought I’d be advocating for dirtier, smellier children. But a bit of extra stink is a small price to pay for a fairer world.