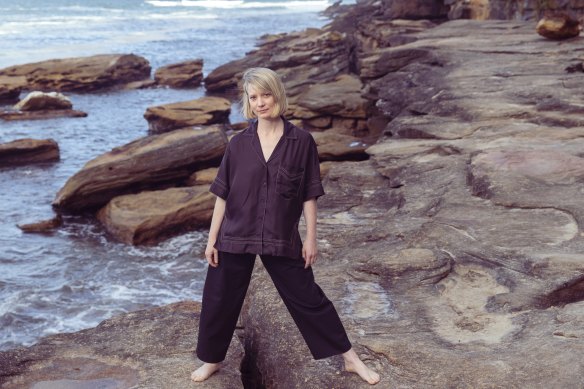 When Robert Connolly, the prolific writer-director-producer of The Dry, Balibo, Paper Planes and many others, called Mia Wasikowska to ask if she’d be interested in a part in his new film, she was interested – but as much for the extra-curricular possibilities as the role itself.

“He’s so good at seducing you into things that you could be on the fence about,” she says. “He was like, ‘Come on, we’ll go to WA, you’ll learn to scuba dive’. And I was like, ‘alright, alright, I’ll do it, but you have to take me on an orca tour’.”

Connolly agreed, and at the end of a week’s filming the pair set out on a boat from Bremer Bay in Western Australia’s south. But an hour out to sea, the 33-year-old Canberra-born actor started to wonder if she’d made a dreadful mistake.

“I’d had a cold and I was literally on my last legs, but pretending I was well enough to go, and I just started to get so seasick,” she says. “I ended up on a beanbag for six hours, fevery and vomiting, and everyone on the boat would be, like, ‘orcas!’ and I’d get up off the beanbag, push people aside, run to the edge of the boat and be, like, ‘oh, orcas’, and then run back to my beanbag and vomit and die.” 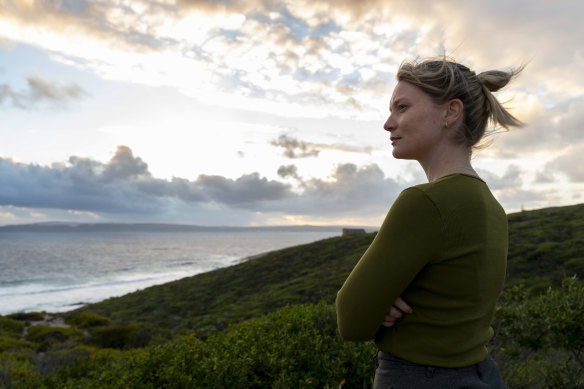 The film that took her out into those deep orca-filled waters was Blueback, Connolly’s adaptation of Tim Winton’s novel about the friendship between a boy and a blue groper. In the film, the boy is now a girl, called Abby and played by three different actresses at different stages of the story: Ariel Donoghue as a child, Ilsa Fogg as a teen and Wasikowska as an adult. Radha Mitchell plays Abby’s mother, Dora, a committed and sometimes difficult environmentalist.

(The fish itself is an animatronic puppet, made in the Melbourne workshop of Creature Technology Co, the outfit responsible for the Walking With Dinosaurs live show and the giant ape in the theatrical production of King Kong.)

It’s the second time Wasikowska and Connolly have worked together on a Winton project; she directed a segment of The Turning, the portmanteau film he produced in 2013 based on a collection of the WA author’s short stories.

She describes Blueback as “a gentle call to action” and, despite the sickness, she’s glad she said yes. “We saw orcas, and it was amazing. And I did learn to scuba dive, which was amazing. That’s one of the gifts you get from filmmaking – you kind of get pushed into doing these things.”

Still, you don’t have to spend long in Wasikowska’s company to sense that she increasingly needs a nudge these days to say yes to an acting role.

“I think my interest is shifting,” she says, “and I think I’ve got less patience for the parts of the industry that I don’t like. I don’t care too much to be pushed into an image that will get me jobs. It just feels very repressive, you know what I mean? To a certain extent you have to be willing to play that game a little bit, you have to go with it, and I feel like I have and the payoff isn’t worth it.”

When you say the payoff isn’t worth it, presumably you’re talking emotionally, and in terms of self-satisfaction? Financially, though, surely it’s a different matter?

“Oh, the pay is worth it. And that’s why it’s such a hard job to say no to,” she says. “But in terms of satisfaction and being who you are as an individual, I don’t know. It doesn’t feel worth it. At a certain point, you go, ‘who is this for? Is this for me, or is this for the company releasing the film?’ All the weird things that you have to do sort of seem silly.”

At this stage it might be useful to make a few things clear. First, Wasikowska isn’t announcing that she’ll never act again – well, not exactly. “I need to pay my mortgage and I like earning money, and I will keep acting, I think. I don’t know.”

And second, she’s not done with the industry. It’s just that she’s more interested in trying to carve a space for herself as a director who also acts than fighting to maintain a place on the A-list.

“I feel like it suits my personality a bit better, actually,” she says of directing. “And having seen the process of different directors making films [she cites Jim Jarmusch and Korean auteur Park Chan-wook as big inspirations], I feel like I’ve had this wonderful film school and, for better or worse, I feel incredibly opinionated, and like I could do it.” 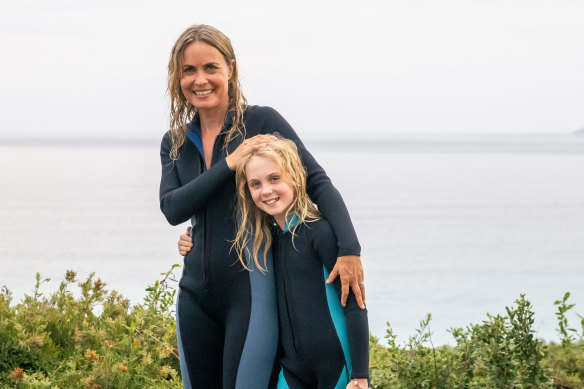 She thinks she will “probably still do some acting jobs”, but admits “I don’t feel particularly ambitious anymore with acting … I feel like all my ambition just got worn out”.

It’s easy to forget just how long Wasikowska has been doing this. She made her screen debut on All Saints as a 15-year-old, and not long afterward was in LA, auditioning for a movie with Russell Crowe. She didn’t get the part, but she did get an agent, and that soon enough led to her landing a role in the TV series In Treatment. “I was 16, I think I turned 17 in between the pilot and the season, then I got a job in the last week of filming in LA and went on to that, and then just kept bouncing,” she says.

By the time she turned 18, she had landed the role that made her a global star, as Alice in Tim Burton’s 3D telling of Alice in Wonderland. She was still trying to finish her high school studies, but legally she was now an adult and the studio no longer had an obligation to employ a tutor on her behalf. “So it was ‘you just have to choose’, and I chose the film. So I technically don’t have my high school certificate,” she says.

Any regrets? “Let’s just say it’s a different kind of education, and I think there’s a lot of value in it. At the same time, I don’t know anything.”

For a girl from Canberra, that first encounter with LA was shocking. She remembers walking through West Hollywood, taking in the contrast between the glamour overhead and the seedy scene at street level.

“The Walk of Fame was littered with homeless people and reeked of broken dreams and depression and mental illness, amongst these massive billboards for the next big whatever.”

She was 15, travelling with her Polish-born mother, and they’d been put up in a hip-but-sleazy hotel on Sunset Boulevard, “and it’s literally like a sex den. There’s a naked woman in a cage behind the reception – a human naked woman, not just a statue; a woman who was paid to sit there. It was just weird.” 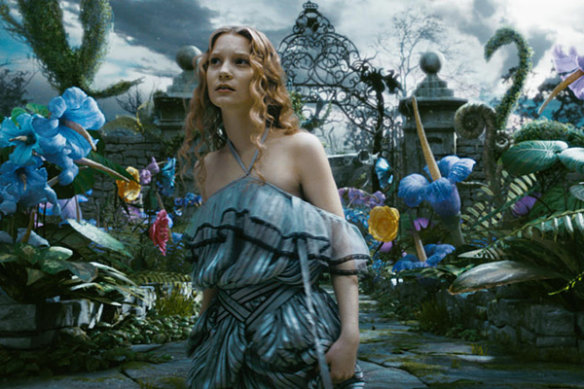 Wasikowska was 18 when she landed the starring role in Tim Burton’s Alice In Wonderland. By the age of 20, it had made her a global star.Credit:Disney

Little wonder, perhaps, that while LA (and to an extent London) was where the work was, Wasikowska was never seriously tempted to move there.

“I moved out when I was 22 and got my own place here in Sydney, but before that I was just gypsying wherever the work was, and after I had done a job I’d just go back to my parents’ house in Canberra. I never really wanted to live in LA. I always felt like I needed the break.”

To her circle back in Canberra, it must have sounded impossibly glamorous, all this globetrotting and the fancy clothes and Hollywood parties and famous names she shared credits with (Johnny Depp, Helena Bonham-Carter, Daniel Craig, Jamie Bell, Julianne Moore, Mark Ruffalo). But it came with a serious downside too.

“I was so busy it just destroyed my social life,” she says. “I was probably a bit introverted anyway, and so needed an extra push to be social. But when you’re out of sight, you’re out of mind as a teen, and people just get used to you not being there.

“I felt there was a period of time where I’d come back, and I’d be like, ‘I don’t think I’ve got many people to tell that I’m back’. And it’s kind of devastating.” 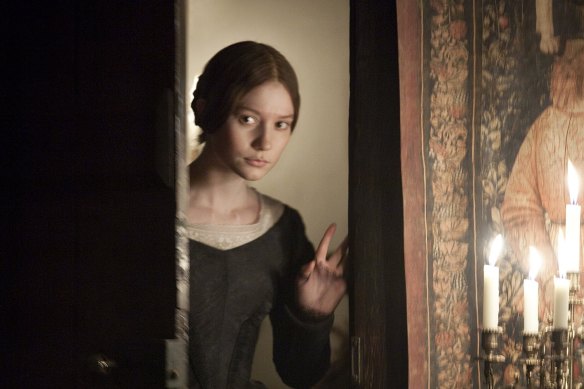 As the title character in Cary Fukunaga’s take on Jane Eyre (2011).

Sure, every film set was a crucible in which relationships formed fast and furious, but the promises to stay in touch mostly came to nothing. She can count the relationships that have lasted, she says, “on one hand, I reckon”.

Part of the reason she isn’t pursuing acting work in the same way as she did, she says, is that she “wanted to slow it down to have more of a community here”, to try to build a life outside the industry.

“But it’s just so hard to make friends as an adult,” she observes. “Everybody makes their friends through their work, but if I’m trying not to do the work and to make friends, it’s really hard.”

Not impossible, though. In 2019 Wasikowska made her stage debut in the Sydney Theatre Company’s production of Lord of the Flies. She’d not long before bought herself a home in the eastern suburbs, and for the first time she was able to wake up in her own house, go to work, and come home to her own house at the end of the day. 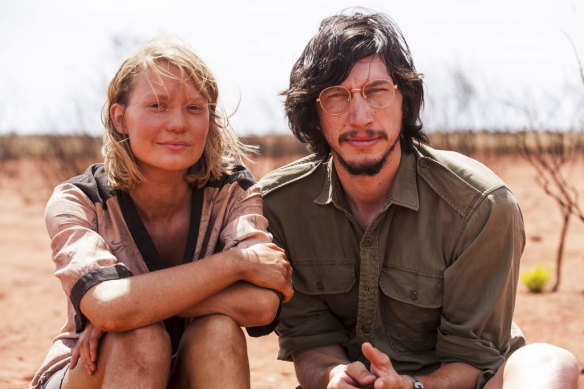 With Adam Driver on the set of Tracks, based on Robyn Davidson’s memoir.

“It was this wonderful time, where I felt, ‘I should cook dinner and hang out with my housemates, and then I’ll go to work in the morning, like everyone else’. And it was great. It’s sort of this delayed early-20s period.”

Her actual early 20s was far less wholesome. “I was in the pre-#MeToo era, and it was scary,” she says. “I was young, I didn’t know how to protect myself.”

“I do. But I tend not to talk about it publicly just because … I’ve never been someone to air my dirty laundry in public.”

She’s scratching around, trying to recall the line she’s used many times before as a way of both acknowledging her encounters with the dark side of the business without giving too much away, and then it comes to her. “I think you would be hard-pressed to find any young woman who hasn’t experienced a level of abuse or inappropriate experiences or behaviour towards them,” she says. “But it’s not really something that I discuss.”

Would it be fair to say you feel tarnished by your Hollywood experiences?

“A little bit,” she says. “But I don’t want to sound ungrateful or unhappy.

“I had some amazing experiences and I learned so much, and I am so grateful for it. And I still want to work in the same industry – just in different ways.”

Blueback is in cinemas from January 1.