A WORD on the tip of the tongue or a forgotten birthday – everyone has occasional memory blanks.

But as you move into your older years, you can’t help wondering if these blips are normal, or a sign of dementia. 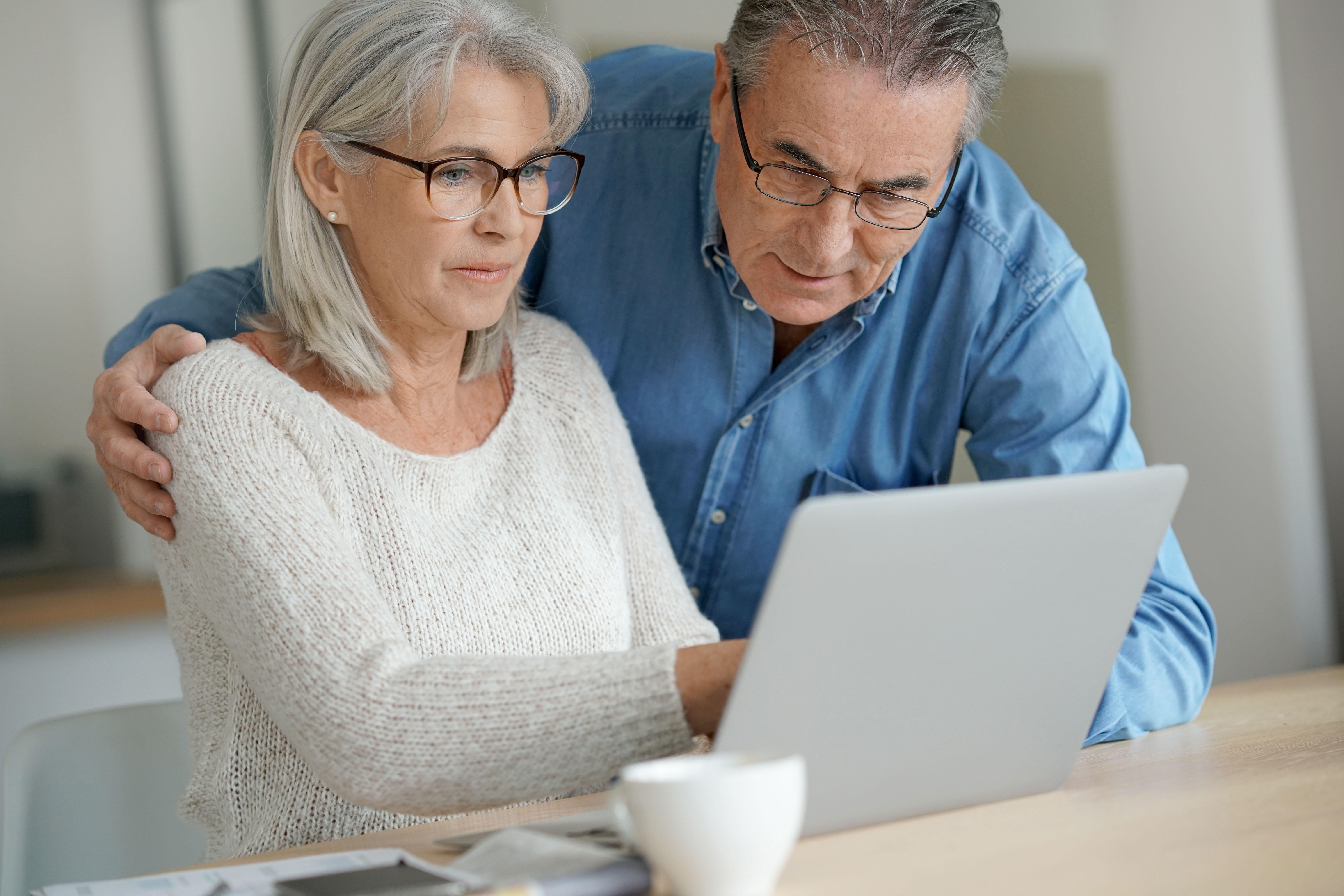 Dementia is a devastating disease that most people fear, and a large percentage of older people will get.

Almost a million people in the UK are estimated to have dementia, of which around half will not have a diagnosis yet.

Alzheimer's Research UK says it is a common misconception that dementia is a condition of older age as over 42,000 people under 65 have dementia in the UK.

There are many types of dementia, the most common being Alzheimer’s, accounting for around 75 per cent of cases.

But on the surface, it can be hard to decipher between brain ageing and dementia, particularly when the disease is in the early stages.

Katie Puckering, Head of Alzheimer’s Research UK’s Information Services team, said the key difference is that in people with dementia, their symptoms impact their daily functioning.

Just some of the ways dementia can impact a person’s daily life, even years before a diagnosis, include:

Dementia is not just forgetfulness. It can interfere with the way someone behaves or how they speak.

So how can you work out if your memory blip is normal, or a warning sign to see someone?

Using the example of lost car keys, Katie explained the difference between someone with normal brain ageing and someone with dementia.

She told The Sun: “We quite commonly as humans put our car keys somewhere out of the ordinary and it takes longer for us to find them.

“As you get older, it takes longer for you to recall, or you really have to think; What was I doing? Where was I? What distracted me? Was it that I had to let the dog out? And then you find the keys by the back door.

“That process of retrieving the information is just a bit slower in people as they age.

“In dementia, someone may not be able to recall that information and what they did when they came into the house.

“What may also happen is they might put it somewhere it really doesn't belong. For example, rather than putting the milk back in the fridge, they put the kettle in the fridge.”

The US National Institute on Aging gives some examples of what is considered normal forgetfulness in old age, and dementia disease.

Read each one carefully and think about what type you may fall under. It may help to do it with someone you live with: 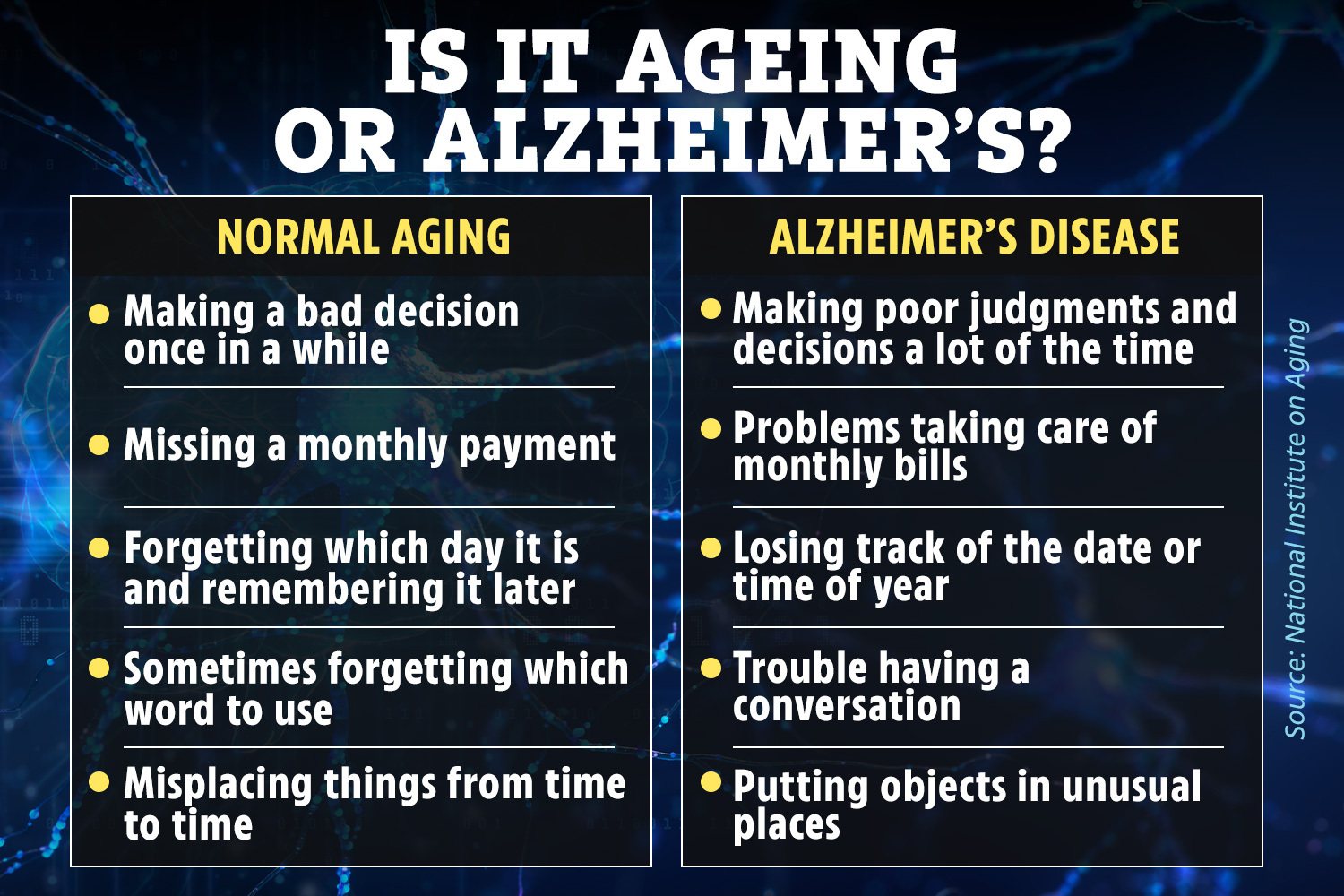 These are only a few examples – dementia can present itself in varying ways.

Sometimes the person affected will not be aware of the deterioration in their cognitive abilities, and it is a loved one that spots the signs.

Katie said: “That is a key feature of some types of dementia – when you start to make mistakes more frequently but not realise it’s happening.

“It becomes quite difficult for people who live independently and don’t know they’re making mistakes around the house.”

How is dementia different from ageing?

The NHS says dementia is “not a natural part of ageing”.

Katie explained: “As we get older our brains do get a little bit smaller, and this is normal. We have a slowing of our thinking and memory processes.

“But in Alzheimer’s [the most common form of dementia], it’s a significant amount of shrinking.

“Over time, brain cells become damaged due to a buildup of toxic proteins called amyloid and tau.

“These start to interrupt how brain cells communicate with each other and that's what brings on the symptoms we associate with Alzheimer’s – repetitiveness, memory loss, sometimes disorientation, and problems with communication.

“The breakdown of communication between brain cells causes them to eventually die off and the volume of the brain – which is a mass of cells – starts to shrink.”

When to see a doctor

It may be frightening to think your day-to-day errors could be the early stages of dementia.

Signs that it might be time to talk to a doctor include:

Katie said the first thing to do is contact your GP if you suspect something is wrong.

She said: “They’ll run some different tests which can rule out other causes.

“With these mild symptoms there are many different symptoms that could cause those, for exmaple thyroid disorders, vitamin deficiencies, and underlying infection, interactions with medications and the menopause.

“So by going to the GP, they can run some blood tests and quick memory tests to determine what the symptoms are. And then if they feel it is suitable, they may make a referral to a memory clinic for more tests.”

There are many organisations that support people, and their families, affected by the memory-robbing disease.