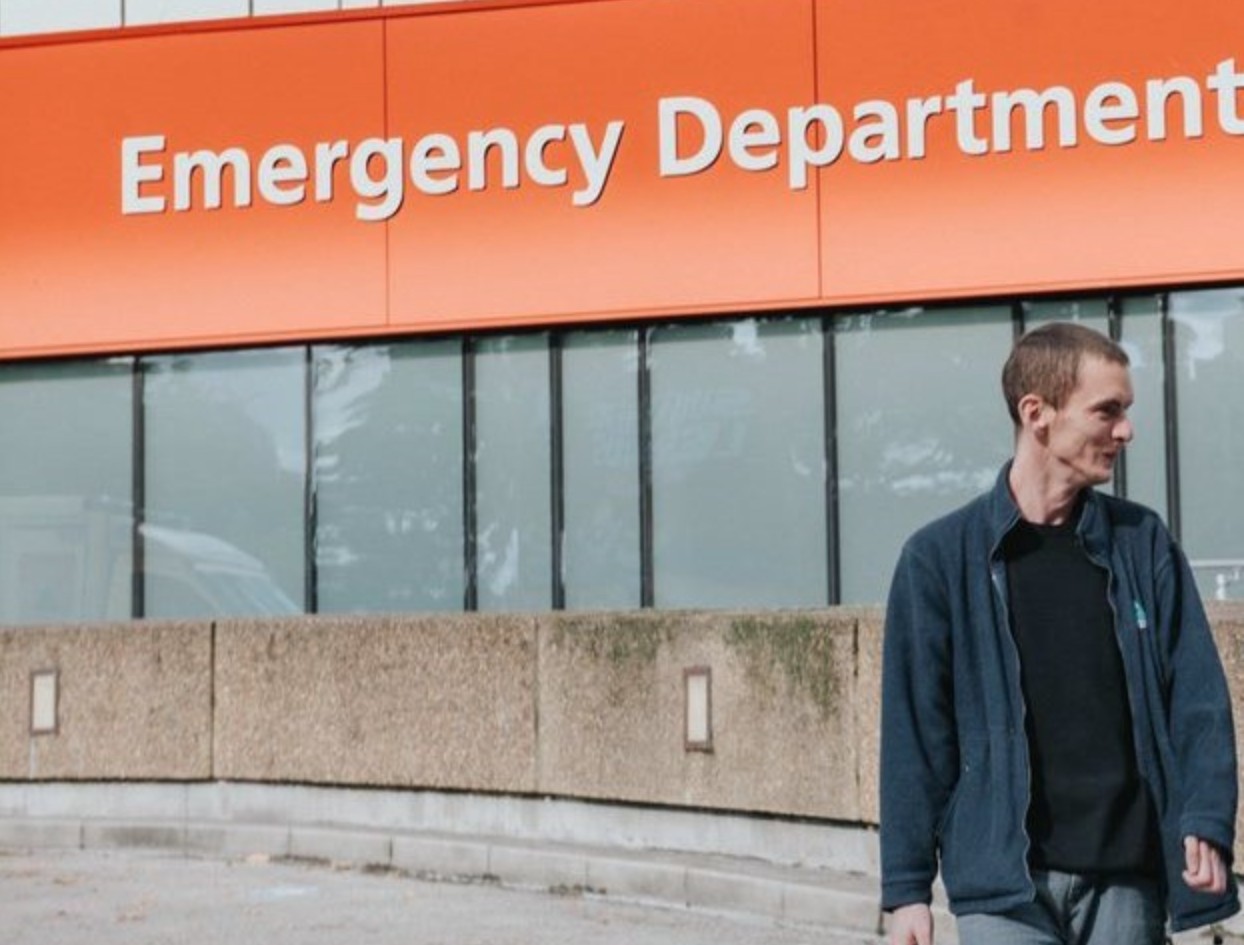 When I quit smoking three years ago, I was on 40 cigarettes a day – the equivalent of two packs.

When I reached the point of wanting to stop, I’d been a smoker for over 20 years. But, after surviving homelessness, giving up the cigarettes was the next logical step towards turning my life around.

On top of this, I wanted to save money, and I want to be around for my two boys for longer. That’s the biggest benefit of quitting for me.

I started at the age of 13. I can trace it back to being a young teenager with ADHD. I was hanging out with the wrong crowd.

Having ADHD meant that I needed classroom support, which was not always available. As a result, I missed a lot of school. Eventually, because of the problems I was having, they thought it would be better if I went to college to get the support I needed – so at 13, I had a college ID.

When I’d buy cigarettes, shopkeepers didn’t ask, they just took the ID and assumed that I was 16 at face value. Pretty soon, I was buying cigarettes for other people, and I would always end up smoking some.

It was the result of peer pressure in a lot of ways; I was going out of school and hanging around with older people and so there was also a feeling of acceptance and belonging.

Smoking cigarettes very quickly led to smoking cannabis – within just a few months really. I was missing school to hang out with my mates, staying out late, coming home at 2am smelling like an ashtray, going to bed and then waking up early before anyone else in the house to go out and do it all again.

This led to problems at home, arguments with my parents and eventually, at 16, I left home after one such argument. I spent six weeks on the streets in London, which was overwhelming to say the least.

Eventually, I started talking to my dad again and he bought me a one-way ticket to Glasgow. He wanted to get me as far away from bad influences as possible and he’d heard there were jobs up there. So I made my way to Scotland, where I got a job in a backpackers’ hostel and got my life back on track for the first time.

I was in Glasgow for around two years, and moved back to London when I was 18.

However, those six weeks wouldn’t be my only experience with homelessness – as roughly 11 years later in 2011, I found myself pushed into homelessness again when my relationship with my sons’ mother broke down.

What started out as sofa surfing and sleeping on my sister’s floor, ended up as six months on the streets of Westminster and a year and a half in a hostel before I was able to get back on my feet. I felt trapped, with no route out. Like anything, I just had to get on with it and endure it.

While at the hostel, I was offered some training to become a volunteer Homeless Health Peer Advocate with homeless organisation, Groundswell, by one of their support workers.

The six-week course trained me to support people currently facing homelessness to make and get to health appointments, speak up for their needs, and increase their confidence.

When you’re homeless, you’re trying to survive and looking after your health becomes one of your last priorities. So having someone at your side – who gets it because they’ve been there – can really help people start their journey out of homelessness.

After, I started volunteering, I was eventually offered a job at the organisation in 2014.

I worked my way up to becoming a Senior Care Navigator in 2019, which means I help support people experiencing homelessness – specifically in Lambeth – to deal with the challenges and barriers that are put in front of them. This includes support in accessing services to improve their health and wellbeing, including accommodation, drug, alcohol and smoking cessation services.

Looking back, you could say that many of my problems started with cigarettes, which exacerbated tension with my parents, leading to my eventual homelessness as a teen.

Even when I was homeless, I smoked. Guaranteed, I would find ways to make the money I needed to buy tobacco – I used whatever means I could. I always knew who to ask for a cigarette or where to get a roll-up.

Sometimes it would take six to eight hours to get one so by the time I had my first of the day, I’d go light-headed because the nicotine would hit me so quick. I’d sometimes have to sit down, my whole head would be spinning.

If I couldn’t get my hands on a cigarette, I would get really grouchy and irritable. I’d be snappy to other people, which could start arguments. When you’re in a community on the streets that looks out for each other, if you’re being ratty with people, it isn’t great.

I have known homeless people pick up cigarette butts off the street to smoke – that’s how strong nicotine addiction is, and what it does to your dignity.

When people are smoking loose tobacco without a filter – as is often the case with homeless people – they are also inhaling more nicotine, which makes them more dependent on tobacco, making it harder to quit. This can lead to lung cancer and other illnesses.

Because I have been homeless myself, I can identify with my clients’ challenges. However, more and more it felt wrong to be helping people with their addictions while I was there with two packets of fags in my pocket every day.

So in 2018, I made the decision to quit smoking, along with a couple of mates from work. There were a few of us who wanted to stop smoking and so with the support of my colleagues, I switched to vaping.

At first I still had some nicotine in the vape, but I reduced it over a while and eventually I just didn’t want it anymore.

Now, I just have the flavours and I keep the vape on me just in case, and for something to do with my hands. When I smell someone who has been smoking, I find it really unpleasant and I have to remind myself that I was like that too once.

On top of that, I have seen a big improvement in my health since I stopped. My breathing and fitness are so much better so, for example, if I’m in the station and in a hurry, I can run up the escalator now and I’m fine. Before, I would have been out of breath. My chest is a lot clearer.

When I was a smoker, I’d have come back from a trip in debt and laden with duty-free cigarettes

I now spend around £25 every two months or so on vaping products. I don’t buy the nicotine anymore but I do buy different flavours.

With the money I’ve saved, I’ve also been able to go on holidays.

When I was a smoker, I’d have come back from a trip in debt and laden with duty-free cigarettes. Now I am saving money – not just for me, but for my boys to have when they are older. They are nine and 12 now, but when they hit 18, there will be money in the bank for them.

They will be able to see what I have done for them and that I love them.

I have tried to quit three times in total. The first time when I was 21 was just a failure. The second time when I was in my mid twenties was an improvement – I lasted eight months.

But the third time – with the support of other people in the same situation as me and with vaping – I have managed not just to quit tobacco, but save thousands of pounds and kick the nicotine addiction for good.

I would say that vaping is good if you are trying to stop smoking. Nothing is better than not smoking at all, but vaping doesn’t produce tar or carbon monoxide, which are the most harmful parts of tobacco. You need to keep trying.

My advice to smokers who want to quit is to find support and find what works for you. Stop Smoking London is a digital platform with a free stop smoking helpline and a range of digital tools – including advice, apps and texting service, as well as links to local face to face stop smoking services.

You’re more than three times as likely to successfully let go of cigarettes with your local stop smoking service. Visit the website – it’s a great first step to take.

Three years ago, I couldn’t have imagined how much my life would change, how much better I would feel without cigarettes, let alone how much money I would save.

I am looking forward to seeing more of my boys in the future and being around for them as they get older, something I am not sure would have happened had I carried on smoking as much as I was.