Fire up the petitions. Notify the lobbyists. When the 10th Fast and Furious film is made, I have a suggestion that is really more of a demand: Vin Diesel and Helen Mirren must kiss.

This was my primary takeaway from watching the latest installment, F9, in which the 75-year-old Mirren and 53-year-old Diesel share a car chase and display more crackling chemistry than any other duo in the movie. She flirts with him, he beams at her, and Diesel’s evident delight in having the Oscar-winning Mirren as a scene partner is just delicious. By the end of the sequence, as her Queenie drove Diesel’s Dom Toretto through the streets of London, I couldn’t help but hope that she would lean over and snog our hero. 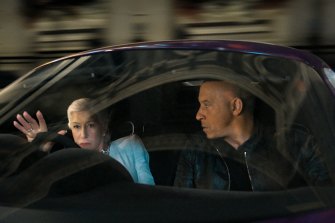 And why not? In the previous Fast film, Diesel kissed another Oscar winner, Charlize Theron. Imagine the smooch streak that could be engineered if even more best-actress winners were persuaded to join the franchise: After Mirren, maybe we’d get Diesel in a romantic clinch with Frances McDormand! (Surely Diesel’s series flame, Michelle Rodriguez, would issue a hall pass for that.)

Sometimes you have to be the change you want to see in the world, which is why I set up a video chat with Mirren this month to pitch this character coupling directly to her. Here are edited excerpts from our conversation.

Q: Your scene with Vin is the best one in the movie, and it’s clear that he adores you. Still, I have a note: There should have been a kiss, don’t you think?

A: A very chaste kiss would be nice, yes.

Q: Listen, I’d settle for that. Maybe part of the thrill of this pairing is that it’s so rare to see Vin Diesel riding in someone else’s passenger seat.

A: I know, this is true. What an honour to find myself driving him, and also very intimidating. Vin doesn’t make it intimidating — he was so easy and lovely — but the technology of this kind of filming is very complex, and it’s a world I’m not that familiar with at all. So it was a great help to have a good friend sitting next to me, for sure. And just to hear that voice! 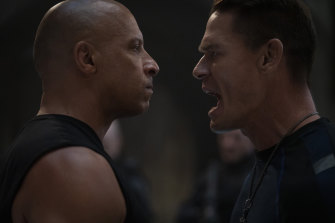 Q: Tell me about it.

A: I mean, Vin has the most unbelievable voice. I go a bit gooey when I hear it. That velvety brown rumble in your ear is so fabulous to experience for a whole day or two. It is like hearing the most incredibly well-oiled engine.

Q: You’ve always had good screen chemistry with bald action stars — Vin, Jason Statham (notably in Hobbs & Shaw,), Bruce Willis (Red and other movies). Is there something about you that just plays well off that stoic action hero type?

A: There might be! First of all, I come into these things with a great respect for these guys because what they do is quite different from everything that I’ve done in my career. Their commitment and depth of knowledge of how these movies work is very impressive. I always feel I can learn from them. Maybe it’s the fact that I really bring a lot of respect that makes the whole thing work, but I think they’re great.

Q: Still, the vibe you’ve got with Vin is a cut above.

A: I think it’s that we are so opposite on almost every level. But at the same time there is a big mutual respect that goes utterly both ways. Also, I met Vin’s mother, who’s lovely, and I think there’s something there as well: He’s very, very close to his mum and obviously loves her. She’s lovely, very sweet and gentle. Not like Vin at all, but he loves her very much!

Q: And your character seems to love Vin’s, or at least feel some affection for him. I’m thinking of your last line to him as he leaves your car: “Don’t get yourself killed, OK? You’re my favourite American.”

Q: This is your third movie in the franchise after The Fate of the Furious and Hobbs and Shaw, but it’s the first to put you in an actual car chase. What was the holdup?

A: Oh my God, it’s totally why I wanted to be in the movies! In reality, they wrote lovely scenes for me, and I was part of the creation of the character in the first place — I wanted her to be called Queenie and come from that kind of East End family I know a little bit about — but I mostly wanted to be behind the wheel of a car and, of course, that didn’t happen for two of the movies. Somehow, they made it work for this movie, which was fantastic.

Q: Did you keep lobbying for that scene every time they brought you back?

A: I take it as it comes. And I whine a little bit and moan and snivel, and that works.

Q: And you actually got to film the sequence in London, right?

A: The fact that I was on the real streets of London, my hometown, was extraordinary for me. To see Vin in that context was surreal: The elegance and the familiarity of London and Vin there was very contradictory! But I was thrilled that the sequence took place in the very heart of London and I couldn’t believe that they closed down the mall going to the Palace. I’m sure the queen must have been out with the binoculars, don’t you think, watching it all from the top bedroom window: “Oh my God, what are they doing?”

A: “Mirren again, really? Will that woman ever leave me alone?”

Q: How long did it all take to shoot?

A: Three or four days that I was involved in, and then of course there was all the brilliant stunt driving that is obviously done by experienced drivers. I’m a big supporter, incidentally, of stunt people being given an Oscar. I think there should be a category for it because stunt people’s contribution to so many films nowadays is so huge and extraordinary.

Q: Your cinematic family has gotten pretty sprawling in this series, with Jason Statham, Luke Evans and Vanessa Kirby all playing your kids. Have you put any thought into who could be cast as your ex-husband?

A: I don’t know if I’m allowed to say but apparently Vin had the idea of Michael Caine. I mean, wouldn’t that be fantastic? That would be just so cool and absolutely perfect. So we’ll see.

Q: Let’s put that out into the ether, then. And while we’re doing that, let me double back on my first request: If a chaste kiss can be arranged in the next movie, would you be open to it?

A: With Vin? Oh my God, of course I would! But only if he talks to me before and after, because it’s the voice that I really get off on, quite honestly.