Since its debut on US television last September, plenty of people have noted the debt La Brea owes to Lost. But star Natalie Zea is not among them.

“I never watched Lost,” she confesses, eliciting from me a shriek of disbelief. “I came very close to getting the Evangeline Lily role [Kate], and actors tend not to watch stuff that they got close to because it’s hard. And then it becomes iconic and years go by and you’re like, ‘Oh, I never watched that.’ So it just never happened. 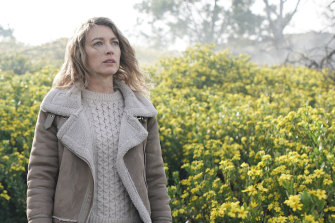 Natalie Zea as Eve, a woman who follows her son down a sinkhole to 10,000 BC, in La Brea.Credit:Sarah Enticknap/NBC

“I can’t really speak to the comparisons,” she adds. “I know that a lot are being made, and I wish I could answer that question better, but I think maybe I haven’t done my homework enough for it.”

OK, for Zea’s sake – and for the benefit of the uninitiated – here’s the crib-note comparison. In Lost, a bunch of people survive a plane crash and find themselves on a jungle island populated by strange beasts and other humans, all the while wondering how it works, how they got there, and how they get home.

In La Brea, a bunch of people fall through a massive sinkhole that suddenly opens up on the site of the La Brea tar pits in Los Angeles and fall through it to the exact same location, only around 10,000 BC. There they find jungle, strange creatures and other humans, all the while wondering how it works, how they got there, and how they get home.

“The idea really started just with an image of a sinkhole opening up in the middle of Los Angeles,” says the series’ creator David Appelbaum, who readily admits the influence of Lost. “It was an image I just couldn’t shake out of my head. 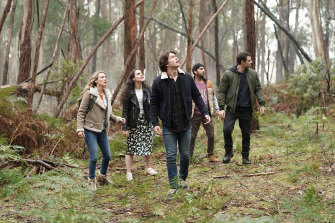 As a group of survivors wander through woods populated by strange creatures, and even stranger humans, the similarities with Lost become obvious.Credit:Sarah Enticknap/NBC

“I’d never seen a television show or a movie begin that way and I knew I wanted to incorporate that imagery in the show, but I didn’t have a story attached to it, so I just started asking questions about this situation: who are the people that fall in; who was left behind; where do they go with this world that they find down here; why did it open up in the first place? Once you start asking questions hundreds more present themselves, and you start to build out a world of characters and a setting. And then eventually there’s enough to write a script.”

It was February 2019 when that image first popped into Appelbaum’s head. NBC shared his enthusiasm for the idea, and by the tail end of the year he had a script ready for the pilot. In early 2020, they started shooting it in Vancouver, “but that’s when the pandemic began, and we shut down for a long time”.

But Appelbaum kept writing, and NBC decided to skip the usual pilot/see how it goes/commission-a-full-season-if-it-works process and went straight to series. And, crucially, the whole thing moved to Australia.

As with all Hollywood productions being shot here, money – in the form of tax offsets and direct grants from the government – was a huge factor. But so too was our success (at the time) in keeping COVID case numbers down. 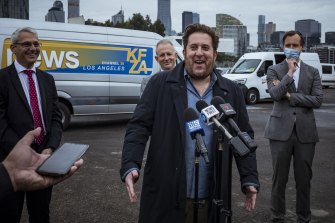 “Yeah, last May was a much different situation,” Appelbaum notes ruefully.

Victoria was not in lockdown for just six weeks of the six-month shoot. That meant Zea and her family (who were here for the entire time) didn’t get to do any of the big Aussie travel experiences they had planned. But there was plenty of action on set to keep her busy.

With a resume that includes the serious drama of Justified and the madcap comedy of The Detour, Zea knew La Brea would mark a major change of direction. “It was actually my husband who said, ‘Look, I know this isn’t where you expected to go next, but it’s not every day you get offered a chance to be an action star, so why not do this now in case this opportunity never arises again?’,” she says. “So it’s his fault we were in Melbourne during winter.”

Ah, winter. For all the planning and preparation that goes into an $84 million TV series it appears no one paid much attention to the fact that they’d be shooting in regional Victoria in winter – and that it can get seriously cold there (they even had one day of snow). And given everyone is meant to have fallen from LA on a typically warm morning, that posed its challenges.

“I think people just have this idea that Australia is warm,” says Zea. “Honestly, even people associated with the production thought the same thing. But I googled it so I knew that wasn’t true. I started lobbying pretty early on … to all but demand warmer clothing, and they were great about it, they figured out a way to do it.”

What Zea hadn’t googled is what being an action star entails.

“I forgot that action involves running, and I don’t love to run,” she says with a laugh. “I was thinking primarily about the stunts, and not about how take after take after take, even though you’re just running a relatively short distance, you’re doing so at full speed and one million times. 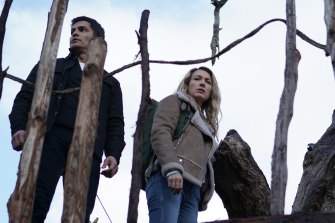 There will be no excuses when La Brea returns to Australia for a second season in a couple of months. This time there will be 14 episodes, a longer stay, a bigger budget ($118 million). And if all goes well, there will be even more to come after that.

Lost ran for six seasons, and NBC is hoping La Brea – which got tepid reviews from critics, but has been a hit with viewers – might have similar longevity (after all, it does have a 12,000-year timeline to cover).

“I know how many seasons the story arc is,” Zea hints. “I’m not gonna say it, but it’s more than four.”

“The world that we’ve created down there has so many mysteries that we’ve yet to uncover, and so many different aspects of the world that are beyond what we’ve seen in season one,” adds Appelbaum. “Also, we have a really large ensemble cast, all of whom have their own stories, and we’ve just kind of scratched the surface.

“I think it has the potential to go for a long time. As long as people are watching, and as long as we’re coming up with strong storylines, I feel we can keep going.”

La Brea is on Nine, owner of this masthead, from Monday, February 7 at 9.10pm