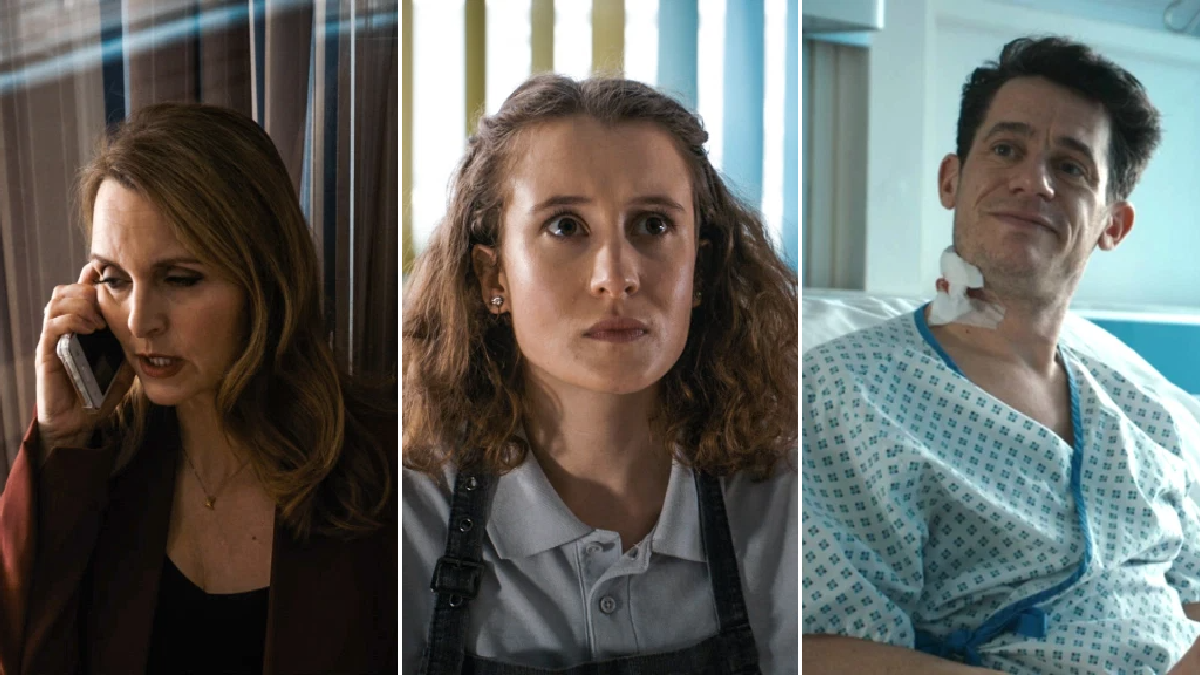 Holby City was under the microscope by the CQC in tonight’ episode and they wanted to talk to everybody. While some remained stubbornly tight-lipped, there were others who were, shall we say, more forthcoming. A nervous Kylie (Amy Murphy) found her mouth running away with her and was soon dishing the dirt on Max (Jo Martin) and Louis (Tyler Luke Cunningham) and the ‘theft and fraud stuff.’ Sacha (Bob Barrett) didn’t need much prodding to bring up the subject of Jodie and her part in Dominic (David Ames)’s accident.

Lead inspector Regina Marriott (Karen Ascoe) had no shortage of material for her report – and that was just the stuff that’s known about.

But it’s Henrik Hanssen (Guy Henry), the CEO of the hospital, himself who was singled out by Regina after her inspection was over, and she told Max that they would probably be putting the hospital under ‘special measures.’

Also lurking in this most dysfunctional of hospitals is some sinister grooming, as Jeni Sinclaire (Debra Stephenson) has promised a man called Richard Peterson, in hospital because a woman had bitten him in self defence, the ‘sweet treat’ of Evie Fletcher (Phoebe French). She’s making him pay triple what he usually pays, because she’d planned to ‘play the long game’ with Evie, using her to recruit other young girls. This is a really dark storyline, and it’s even more upsetting that Jeni is doing this almost in front of Evie’s dad Fletch (Alex Walkinshaw), who is also Jeni’s boyfriend.

Meanwhile the experienced drama viewer will have quickly realised that when Ange (Dawn Steele) started throwing up and feeling weird, she was actually pregnant. Ange, a doctor, don’t forget, blamed the symptoms on the menopause, which did mean we were treated to a lovely scene where Max and Ange had a supportive chat.

We were also treated to meeting Josh’s mum Elaine, who hadn’t realised that the woman Josh kept raving about was quite a bit older than him. When she did meet Ange she was upset that Ange will never be able to give ‘Joshy’ children. He replied that he didn’t want children anyway, so obviously Ange isn’t going to be over the moon now she finds that a baby Joshy is on the way. So far Josh is unaware of this, but as Ange has already told Kylie, who is both notoriously indiscreet and also lives with Josh, it can’t stay a secret for long.

We also learned that Kylie is putting pictures of her feet online, where foot fetishists are willing to pay good money to see her with her socks off. This bothered Louis enough to make him try to get her some extra nursing shifts so she didn’t have to expose herself in this way.

Kylie was cross with him because it’s easy money as far as she’s concerned, but is it just another side of the same ‘industry’ that Jeni is getting Evie involved in?

Sue Haasler is the author of five novels and the official BBC Holby City book, which you can read about here.