“I have this thing where I deeply love – for spiteful, bad reasons – seeing someone behind me pull out into the lane next to me and almost cause an accident … I love that moment when I pass that car,” says Mike Schur, writer and creator of Parks and Recreation, Brooklyn 99 and The Good Place. 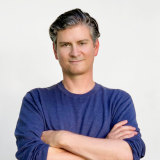 It’s no big deal, a simple celebration of karma that causes no harm. Or does it? Is it ethical? Should we even care? Schur says he has always been obsessed by rules and abiding by them, so this is the sort of stuff that preoccupies him. So, it’s not surprising he has written a book exploring the ethics of living, boldly called How To Be Perfect: The correct answer to every moral question.

It’s a whistle-stop tour of the main philosophical and ethical arguments of the past 2500 years: Aristotle, Plato, Kant, Nietzsche, the big names ticked off and their views summarised.

Schur punctuates the book with real life-dilemmas, from the absurd (“Should I punch my friend in the face for no reason?“) to the complex (“Can I still enjoy great art if it was created by terrible people?“). It’s accessible and funny, as you might expect from a writer of his calibre, and an illuminating study of the question: how do we live a good life?

He says his work creating television programs has often borne some relationship to these concepts. “When you look at the shows I’ve worked on, I’ve circled around it,” he says, citing Parks and Recreation, in which the main character works in government, prompting discussion about ethics in civil service.

Netflix’s The Good Place is the most obvious example, where people who have lived “a good life” go to what’s known as the Good Place (not heaven, apparently, but Ted Danson who plays Mike seems a lot like God and only good people get to go there). Kristen Bell’s character, who lived a decidedly brattish, self-absorbed life finds herself mistakenly sent there, which makes for all sorts of mayhem. 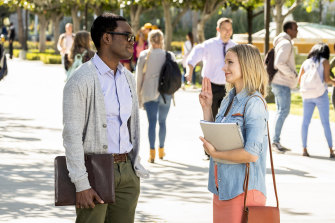 Kristen Bell finds herself mistakenly sent to the good place, in the TV show of the same name.

Schur is also an executive producer on Netflix’s Master of None and animated series Q-Force. He has adapted the much-loved 1989 Kevin Costner movie Field of Dreams into a series for Universal, which will be released next year and is developing Primo, a comedy with Shea Serrano, for Amazon.

As well as examining philosophical schools of thought, Schur relates different cultural approaches. He spends some time on the southern African concept Ubuntu, which is explained by the Kenyan philosopher and theologian John Mbiti as follows: 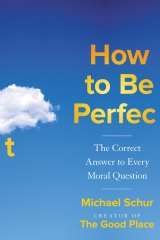 Schur goes on to contrast this with Descartes’ quote: “I think, therefore I am”, which underlines the Western approach, focusing on the individual.

“When we place this next to this Ubuntu formulation – “I am, because we are” – well, man oh man, that’s a pretty big difference. Descartes saw his own singular consciousness as proof of existence. Practitioners of Ubuntu see our existence as conditional on others’ existence.”

There are of course many answers to moral questions but there’s a lot to be gained by analysis and consideration of how we live, and how we can live better. Towards the end of the book, Schur includes a letter to his children. “Start thinking about other people a little more,” he writes.

“Sometimes that will be really hard. It’ll take work, concentration, energy, sacrifice. It’ll be tricky and complex and confusing. These are the times you’ll blow it – you’ll make a mistake and cause harm you didn’t intend to cause. Take a deep breath and apologise. Remember: we are wrong, and we try again and we’re wrong, again and again. Keep trying. Choosing not to try is still making a choice, and it won’t make you (or anyone else) a better person.”

How to Be Perfect is published by Hachette.