When the freshly crowned former Australian of the Year Grace Tame gave a speech about swallowing fear and making noise on January 25, 2021, former Liberal staffer Brittany Higgins was inspired to go public with allegations she was raped in Parliament House.

Together, the two 26-year-old women unlocked a movement that saw women all over the country stand up against systemic abuse in all its forms.

Tame and Higgins will address the National Press Club in Canberra on Wednesday, where they’re expected to call out the government for not doing enough to protect women from harm in Parliament House, and the rest of Australia.

It has only been a little more than a year since both women stepped onto the national stage. We look back on some of the moments that led up to tomorrow’s speech.

25 January 202l: Grace Tame, 26, is awarded Australian of the Year for her advocacy on behalf of the survivors of child sexual abuse in Tasmania. She had campaigned for a law allowing survivors including herself to speak out about their experiences. 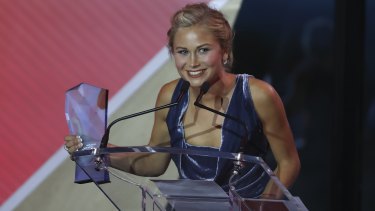 15 February 2021: Federal ministerial staffer Brittany Higgins, the same age as Tame, is inspired to quit her job two weeks after Tame’s speech, re-engage with police, and go public with her allegations she was raped by a colleague in March 2019 on the couch of her then-boss Linda Reynolds in Parliament House. 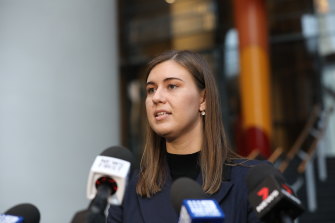 Brittany Higgins was inspired to tell her story after Tame was announced Australian of the Year.Credit:Dominic Lorrimer

16 February 2021: Tame calls on the country to listen to Higgins. “I stand with survivors. I am an advocate for normalising the conversation and breaking the cycle of shame. As such, I’m here to empower people and encourage the platform to be shared. I don’t believe it’s appropriate for me to take the microphone when others are bravely coming forward. This is Brittany’s story. Let us listen,” she said in a social media post.

3 March 2021: In an address to the National Press Club, Tame says she was not surprised by the rape allegations which rocked Australian politics. Tame slammed Prime Minister Scott Morrison who said a conversation with his wife Jenny helped him “clarify” how he felt as “as a father” about Higgins’ allegations. Tame said, “It shouldn’t take having children to have a conscience…And, actually, on top of that, having children doesn’t guarantee a conscience.” 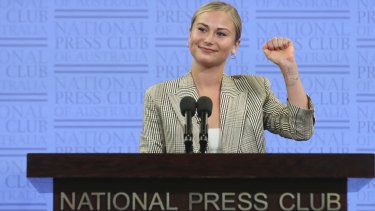 2021 Australian of the Year Grace Tame during her address to the National Press Club in March.Credit:Alex Ellinghausen

15 March 2021: Brittany Higgins speaks at the Canberra March 4 Justice protest while Tame speaks at a Hobart rally to protest against the Australian Parliament’s ongoing abuse and discrimination of women in Australia. 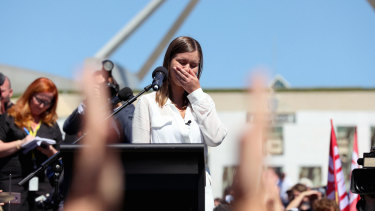 Brittany Higgins speaks at the March 4 Justice protest to rally against the Australian Parliament’s ongoing abuse and discrimination of women in Australia at Parliament House in Canberra on March 15, 2021. Credit:Dominic Lorrimer 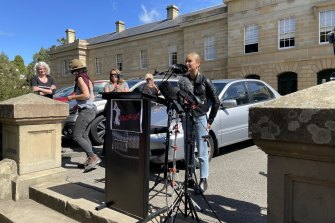 7 September 2021: Higgins and Tame have “their own” Women’s Safety Summit after not being invited to an official federal government event on the same topic.

3 December 2021: Brittany Higgins and Grace Tame argue the government’s response to the Jenkins report shows “Scott doesn’t get it”. Sex Discrimination Commissioner Kate Jenkins handed down a report on how to clean up parliamentary workplaces in November. 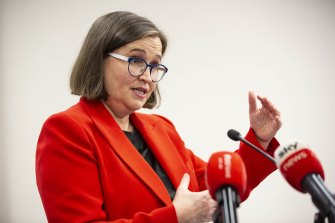 Sex Discrimination Commissioner Kate Jenkins was asked to write a report on how Parliament could be a better workplace.Credit:Jessica Hromas

15 December 2021: Higgins and Tame are crowned Australia’s ‘Women of the Year’ on the front cover of Marie Claire magazine.

Grace Tame’s lack of smiles was interpreted by some as exhibiting a young woman’s discomfort at being in photo op with a powerful man rather than a media-savvy activist taking a stance.Credit:Alex Ellinghausen

5 February 2022: In a move welcomed by Higgins, the government announces they will establish a nonpartisan Leadership Taskforce to implement all 28 recommendations set out in the Jenkins Review to address the safety of employees in Parliament House.