The state government has flagged harsher penalties for those caught flouting coronavirus restrictions, as police issued the largest number of fines in one day since Victoria's second lockdown began.

Victoria Police issued almost $250,000 worth of fines in the 24 hours to Monday morning, including one to a man who travelled to the Melbourne CBD to play Pokemon Go and another who went to his Surf Coast holiday home. 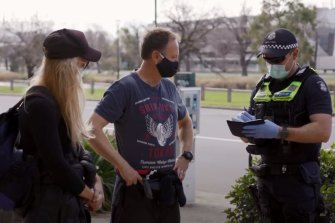 Victoria Police patrol the Tan on Monday as part of Operation Sentinel.

A total of 172 fines were issued on Sunday, of which 22 were issued at vehicle checkpoints and 27 were handed to people not wearing a face mask or covering without a valid exemption.

It was the largest number of fines issued in a day in Victoria since stage three restrictions were re-introduced in the state at midnight on July 8.

Examples of fines provided by police included a man from Sunshine who was found in Melbourne playing Pokemon Go and a woman at Southern Cross Station in the CBD attempting to travel to Bendigo.

Two men were fined after police questioned them at a fast food outlet in Hobsons Bay. The pair said they had come from a friend’s house in Altona where they stayed overnight.

A Keilor man intercepted by police in the Surf Coast admitted to police he had travelled there on Friday to stay at his holiday home and was fined, as were a group celebrating a birthday at a Point Cook short-term rental property.

Premier Daniel Andrews on Monday announced the sweeping shutdown of some workplaces and tight restrictions on others, and flagged that there would be further announcements around compliance and police powers on Tuesday.

"I'll have announcements [on Tuesday] about penalties where … [there is] totally unacceptable behaviour, doing the wrong thing," he said.

"It isn't good enough for us just to get angry. We need to take steps. And we need to send very, very strong messages. We have been, but we're going to go a step further. I'll have more to say on that tomorrow." 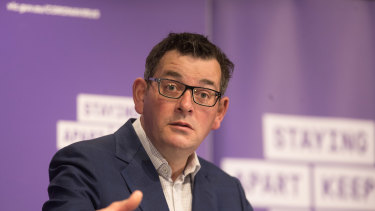 Premier Daniel Andrews said there will an announcement about stricter penalties on Tuesday. Credit:Simon Schluter

Mr Andrews said the government will introduce a permit system where essential workers will have a piece of paper, which proves who they are and where they work, that they can show police if they are questioned.

"As it is now, the curfew obviously does apply," he said. "Police will be stopping you. They will be asking those questions. They'll do it respectfully. And they'll be very fair in these early days.

"But the time will come when that gets turned off. And anyone who stops and doesn't have a lawful reason will get fined."

"The curfew is there for a reason – to protect all of us. You just can't be going out at 9pm at night to a mate's place and say, 'No-one will know'. You will get caught."

"Victoria Police, as I've said a few times now – and the fine data backs me up – they are not mucking about. They will continue what has to be done."

Chief Health Officer Brett Sutton said the curfew will allow police to have a greater oversight over the reasons people are out late at night.

"And they'll crack down on those individuals who are moving for non-essential reasons who might be visiting other homes," he says.

Police conducted 4366 spot checks on people at homes, businesses and public places across the state on Sunday.