I don’t love being told what to do, but this week I have been told pretty aggressively by billboards, my Netflix homepage and all of my newsfeeds to watch Glass Onion so – because I was planning to anyway – I did. Two and a half times. 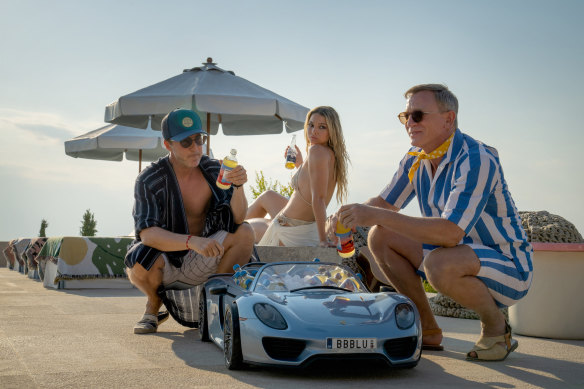 The cosy crime satire is a sequel to 2019’s hit film Knives Out, and once again stars Daniel Craig as modern-day detective extraordinaire Benoit Blanc. In it, an eclectic group of “disruptors” are invited to a private island by billionaire Miles Bron (Edward Norton) to spend a weekend solving a mystery game he’s set up centred around his own (pretend) murder. As you would expect, things don’t go to plan and soon the bodies start piling up.

In between the hijinks, the twists, and the mile-a-minute pop culture references, the thing that took me most by surprise, however, was how much I liked that it was set in the first year of the pandemic. As soon as the May 2020 title went up my brain flickered – was this film going to pretend the last few years haven’t happened, or lean into it?

All fiction films set in the real world from 2020 onwards are going to have to make a choice – ignore, acknowledge or else take place in an alternate reality where COVID-19 never happened.

I’m not ready for earnest movies that centre on lockdowns, but at the same time I rankle at the idea of a story that takes place in a 2021 where people still associate the word “quarantine” with boats from the 1800s. In this arena, at least until this weekend, I was that frustrating friend who when you ask what they want to eat says, “I don’t mind”, followed by a list of the things they don’t want but offer no suggestions beyond that. 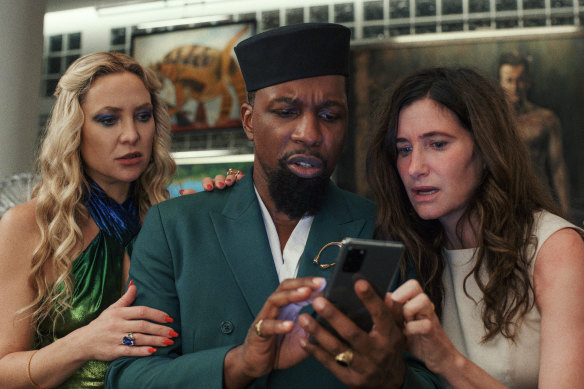 Turns out, what I wanted was a little bit of a nod, and then for the plot to move on.

In Glass Onion, the pandemic is part of the background but not the focus. Early on, in the scene where the characters are shown together for the first time, their choices about face coverings lets us know just who they are.

The controversial and somewhat washed-up model wears a useless mask made of mesh. The politician whose actions don’t always match up with her words has a mask that keeps slipping off her nose. And the men’s rights activist YouTuber and his girlfriend aren’t wearing masks at all when they show up on a motorcycle firing shots into the air. 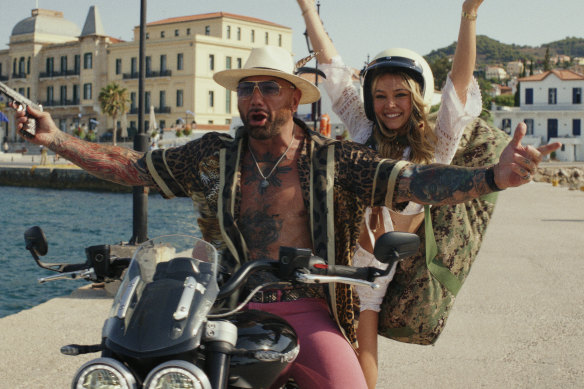 Dave Bautista as Duke and Madelyn Cline as Whiskey in Glass Onion.Credit:Netflix

Familiar moments are peppered throughout. We see a politician (Kathryn Hahn) doing a news interview from her home – she’s dressed professionally from the waist up, but wearing pyjama bottoms because why bother when the camera can’t see that part of you. Kate Hudson’s character refers to people being “in my pod”. A character answers the door dusted in flour and holding a sourdough starter. Blanc, cut off from solving mysteries, has taken to spending too much time in his bath and reluctantly playing group computer games with his friends (who just happen to be Angela Lansbury, Stephen Sondheim, Natasha Lyonne and Kareem Abdul-Jabbar). 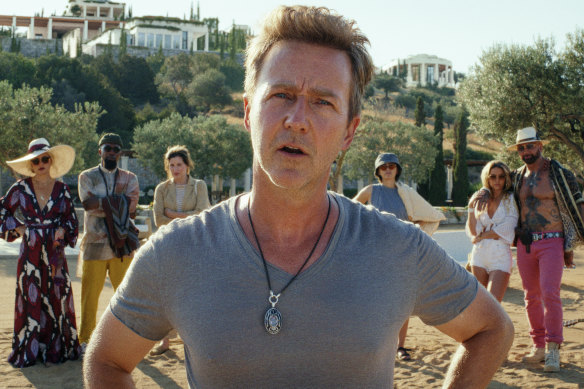 When I was small, my dad liked to watch a film called Hope and Glory, which focused on a child growing up during World War II, just as he did. I feel like I understand that a lot more now.

This isn’t nostalgia. I’m not wistful for the time in my recent past where I’d spend most evenings playing Mortal Kombat while listening to the helicopters flying overhead. It’s a separate, strange thing.

Normally we have cultural touchstones – singular moments, events that last for a matter of hours only. For us to have a shared experience of this magnitude is rare, and so there is a strange comfort in seeing something you’ve lived output on the screen without it being the focus.

Glass Onion reminds us we all got a bit strange in lockdown, and for murder mysteries, that, it seems, is helpful. Our detectives used to rely on boring old cigarette ash to solve a case, now they get to use masks and lockdown parties as well.

Glass Onion is streaming on Netflix.