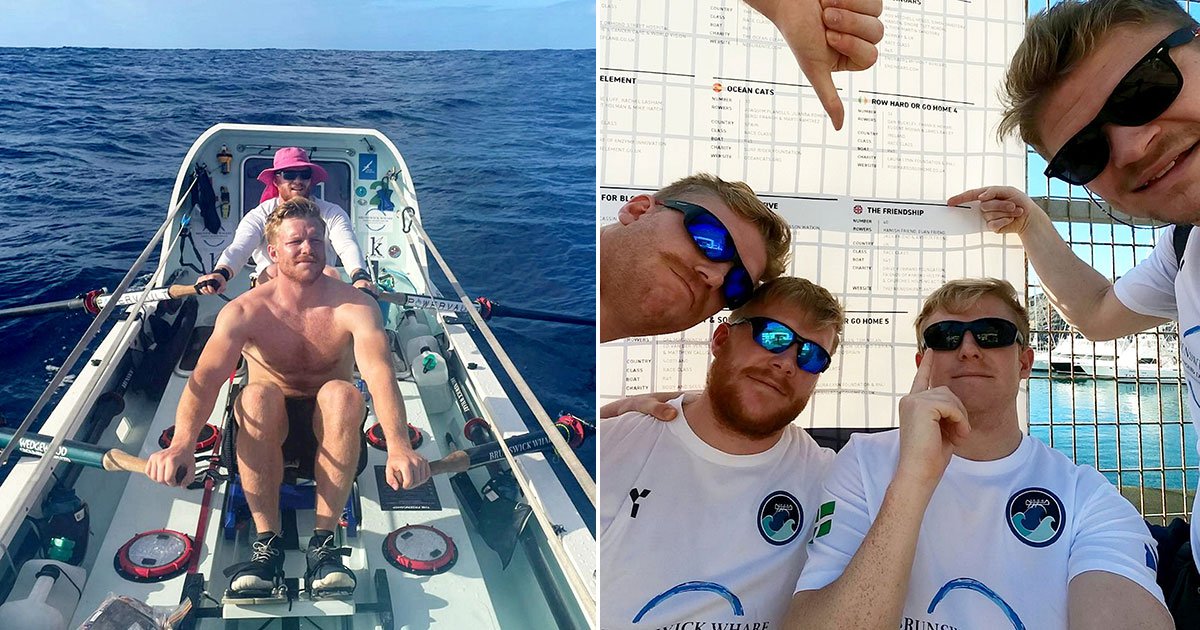 Four brothers – made up of two sets of twins – are close to setting a world first by completing an epic 3,000 mile row across the Atlantic Ocean.

Once they cross the finish line, the group will be the first four brothers to row any of the world’s great oceans.

Adventurous siblings Jack and Hamish Friend, 26, and younger brothers Euan and Arthur Friend, 24, have already raised more than £80,000 for charities since setting off on their endurance challenge nearly a month ago.

The foursome, from Tiverton, Devon, trained for the gruelling feat for 18 months ahead of their departure on December 12 from La Gomera, in the Canary Islands.

And they are expected to finally complete the Talisker Atlantic Challenge race and arrive at their destination, Antigua, in the next week.

Hamish, who works in property surveying, said: ‘None of us had rowed that much before.

‘It was one of those challenges that I saw on an Instagram video and thought, “Wow, that looks amazing. Let’s give it a try.”‘

The team – who dubbed themselves ‘The FriendShip’ – found themselves sponsors and a boat, and got rowing training from triple Guinness world record holding rower Duncan Roy.

Previously the longest stint they had done at sea was 50 hours – but have now managed close to a whole month out at sea.

Their 28ft boat is one that had previously completed the crossing and was being ‘recycled’ for another challenge.

The brothers rotate the rowing, each completing two hours on the oars followed by two hours resting and sleeping.

They consume around 6,000 calories a day of freeze-dried food and make their own drinking water from a solar-powered desalination unit.

They even spent Christmas and New Year on the boat – and shared one of their dad’s brandy-soaked Christmas puddings.

Along the journey, the lads have battled swollen hands, cuts and bruises – along with blazing temperatures both out and inside their cabins.

Reflecting on their progress, Hamish said: ‘There has been some massive highs and some pretty low moments over the past 26 days.

‘High moments from just surfing down some massive waves, and these amazing starry skies and amazing sunrises and sunsets.

‘Low moments such as being slapped in the face by a flying fish at two in the morning, to getting absolutely soaked by these Atlantic storms that come along.

‘Sitting in your cabin all damp and wet trying to get to sleep.

‘But all-in-all it’s been amazing, thanks to everyone for your support.’

The brothers are completing the challenge in aid of three local charities – and have so far raised a whopping £82,000 for the cause.

The charities are CHAT, a vital service for those struggling with housing issues in Mid Devon; the Drive Forward Foundation, which enables children and young people with experience of foster or residential care to achieve their full potential; and Friends of Kiwoko Hospital, a charity set up to support the work of the Kiwoko Hospital in Uganda.

Katie Humphreys, 22, is Euan’s girlfriend and has been keeping in regular contact to share their progress on social media.

She said: ‘They are loving it. I’m quite shocked – they don’t even want it to end.

‘They have loved being able to push themselves to their mental and physical limits.

‘They have also raised over £80k for three fantastic charities and that’s what’s driving them to do the challenge.

‘Those charities were chosen because they are small and the money will make a very real difference to them.’