People who have been reported as ‘missing persons’ reveal what REALLY happened with their disappearance, from a teen who ran away with men she met online to kids kidnapped by their own parents

People who were once ‘missing persons’ have revealed what really happened to them when they were gone, with some stories more complicated than others.

A Reddit thread that was posted on Monday asked users to share their stories about a time when they had gone missing. Some admitted to running away from their families, while others explained they were struggling with mental illness at the time.

A few people recalled being kidnapped by one of their parents during a divorce battle, and then there were those who were presumed missing because of a simple misunderstanding. 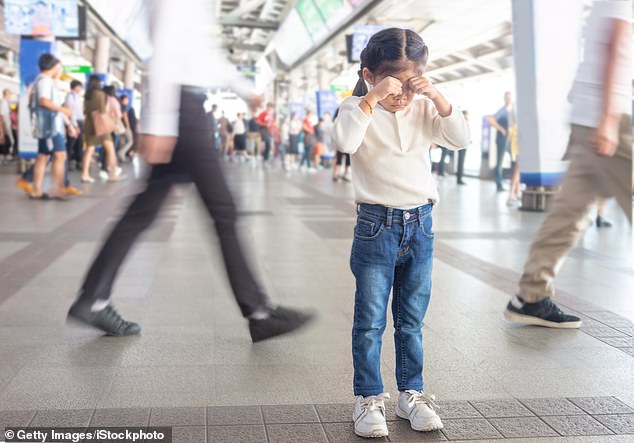 Sharing stories: Reddit users who were once ‘missing persons’ have revealed what happened to them while they were away from their families and friends (stock image) 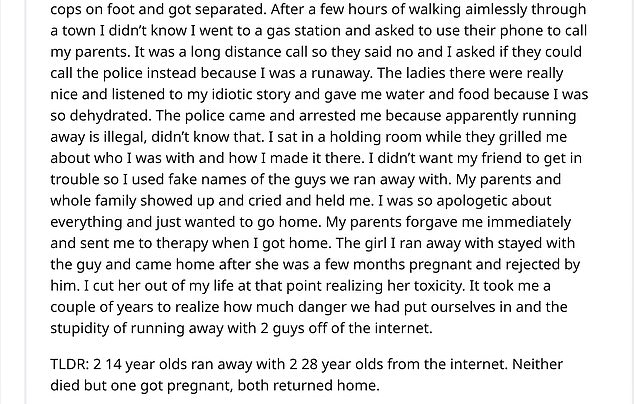 Dangerous: One woman revealed she and a ‘very toxic friend’ ran away with two guys they met on the internet when they were 14 years old

‘When I was in Singapore, must have been primary or junior high school in the early 80s, we had camping trips that took us to another part of the island with no radio, TV or cellular. I was clear that I was going on this trip to my mother, she even went to the store with me to get supplies,’ one person recounted.

‘I was out of contact for the entire week, I was clothed, sheltered, time of my life. I came back to civilization to see my picture on all the TVs on the MRT. She thought the week after. Oof.’

Someone else admitted to running away from home with a friend at the age of 10, explaining that they had ridden their bikes to another state and spent a week living under a bridge.

‘It was a relief when they found us,’ the Reddit user shared. ‘I had some cash but not much. My friend eventually resorted to a couple of trips to the local grocery and shoplifted a few candy bars when the cash ran out. That is how we got found. He was spotted on his return trip from one of those supply runs.

‘I feel guilty about that to this day,’ the person admitted, noting his friend came from a ‘seriously abusive family and really caught it when he got back.’

One woman recalled how she ran away at the age of 14 with a ‘very toxic friend’ who wanted to meet up with a ’19-year-old man’ she started ‘dating’ online after telling him she was 18.

‘I threw all of my stuff out of my window and told my dad I was going to study at her house,’ she said, explaining that the guy met them in the next neighborhood and took them out.

‘He brought a friend for me even though I wasn’t interested at all. When we got to his town my friend told him we were only 14 and we’re running away,’ she continued. ‘He said he lied too and was actually 28 but wanted her so he was ok with us being runaways.

‘We spent the next few days hiding in the Appalachia’s [sic] and eating what she had packed for running away. The other guy who was meant for me was frustrated because I wanted nothing to do with him and was just following my friend.

‘He ended up dropping us off at a hotel he rented so we could shower and sleep in a bed. Later he came back and brought a bunch of people to have a party in the room. The cops were called and my friend and I assumed it was because we were runaways so we fled the cops on foot and got separated.’

The Reddit user said she asked to call her parents at a gas station but was told no because it was a long-distance call. She ended up calling the police and got arrested ‘because apparently running away is illegal.’ 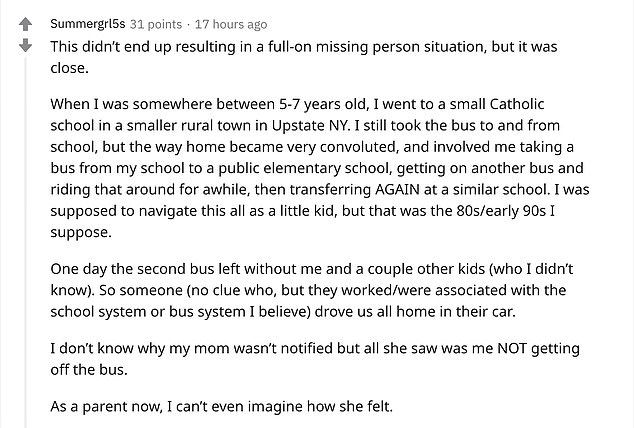 Misunderstanding: A number of Reddit users admitted they weren’t actually missing but their families feared they were

She admitted to giving the police fake names of the guys they ran away with because she didn’t want to get her friend in trouble.

‘My parents and whole family showed up and cried and held me. I was so apologetic about everything and just wanted to go home. My parents forgave me immediately and sent me to therapy when I got home,’ she said.

‘The girl I ran away with stayed with the guy and came home after she was a few months pregnant and rejected by him. I cut her out of my life at that point realizing her toxicity.

‘It took me a couple of years to realize how much danger we had put ourselves in and the stupidity of running away with two guys off of the internet.’

Someone else opened up about being on the streets and sleeping on benches for about eight months.

‘I developed a serious mental illness. As a result I went from getting a graduate degree to being on the streets the next spring. There was a Facebook page “Have you seen [my name],”‘ the person explained. 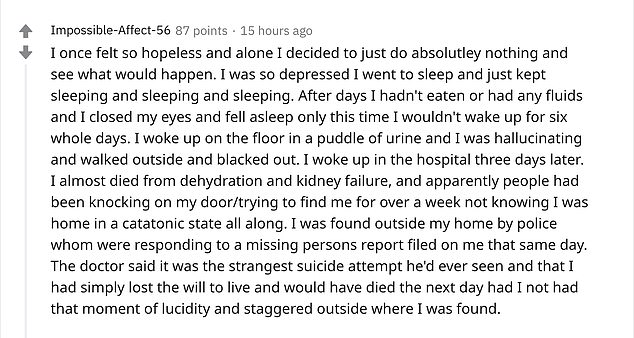 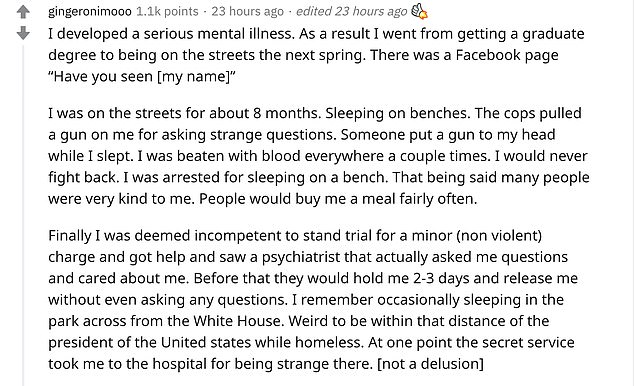 Hard to handle: Some people shared how they went missing while struggling with mental illness, while others were technically kidnapped by their parents during divorce battles

‘The cops pulled a gun on me for asking strange questions. Someone put a gun to my head while I slept. I was beaten with blood everywhere a couple times. I would never fight back.

‘I was arrested for sleeping on a bench. That being said many people were very kind to me. People would buy me a meal fairly often.

‘Finally I was deemed incompetent to stand trial for a minor (non violent) charge and got help and saw a psychiatrist that actually asked me questions and cared about me,’ the Reddit user recalled.

‘I haven’t been homeless for a few years now. Live with a roommate. See my doctor every month. Just needed some help and compassion (and meds). Life is pretty good now.’

A number of people also shared that they were technically kidnapped by their parents.

‘Mom decided to run off with me, lmao. I was 9ish,’ one person wrote. ‘I didn’t see my dad for six months. I don’t even know what happened or why we left.

‘She was in the hospital and I don’t know why. It was f****d up. Ended up in a different school and the kids hated me for some reason.’