Dynasty star Emma Samms has told of her six-month battle with ‘long Covid’ and admits while she doesn’t know when she’ll get better, she still feels like ‘one of the lucky ones’.

The British actress, 59, from Gloucestershire, began suffering symptoms of Covid-19 in March, but has continued to suffer with shortness of breath and chest pain, and appeared on Good Morning Britain to speak about her illness.

She explained that there are ‘good days and bad days’, and while she kept assuming she would recover, she continues to fluctuate from feeling normal to ‘being totally wiped out’. 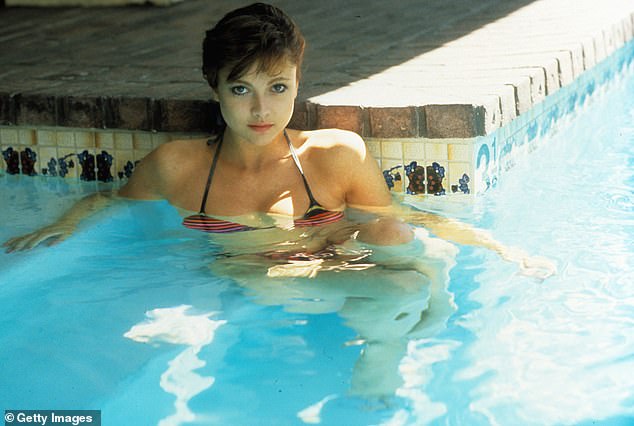 Dynasty star Emma Samms, 59, has told of her six-month battle with ‘long Covid’. The actress, who played Fallon Carrington Colby is pictured in 1985 in Los Angeles 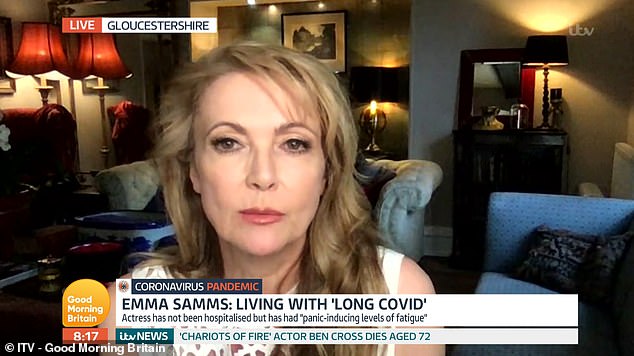 Emma first had symptoms in March but has continued to suffer with shortness of breath and chest pain, and appeared on Good Morning Britain to speak about her illness

‘There are some good days and some bad days’, told Emma, ‘It’s very unpredictable which is annoying to say the least , incredibly frustrating.’

She went on: ‘I kept thinking “Right two weeks, they’re saying two weeks and then i’ll feel better” And I just didn’t.

‘There would be a good day and then I would get back out in the garden and try and do some gardening and the next day I would be completely wiped out.’

The actress, who played Fallon Carrington Colby in the 1980s US TV show, went on to stress that while her ongoing symptoms and lack of medical knowledge is ‘frustrating’, she still feels grateful not to have been hospitalised. 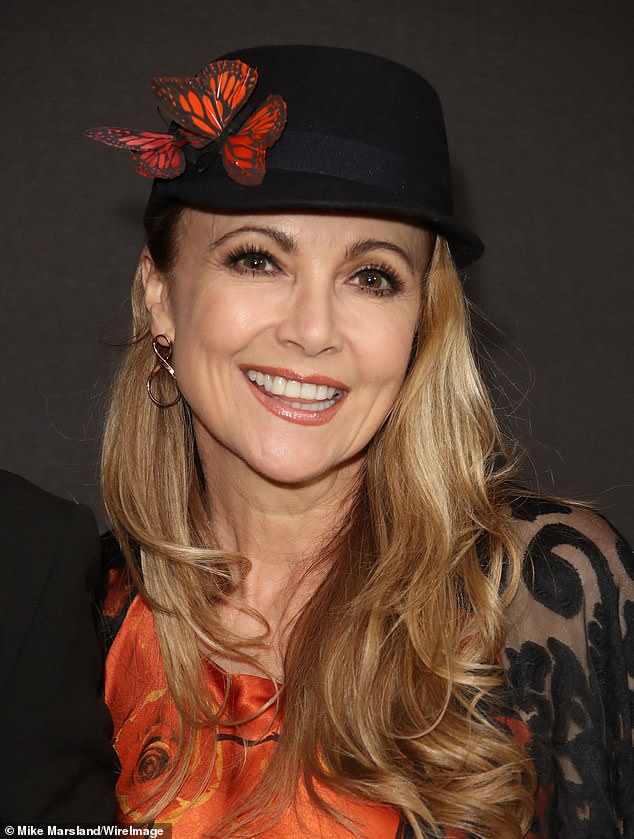 Emma, pictured in 2018, went on to stress that while her ongoing symptoms and lack of medical knowledge is ‘frustrating’, she still feels grateful not to have been hospitalised

‘I do want to stress i’m still one of the very lucky ones, said Emma, ‘I wasn’t hospitalised, I wasn’t in the ICU.

‘Relatively speaking, even with these ongoing symptoms, I haven’t got kids to look after, so I consider myself very lucky.’

‘But it’s frustrating there isn’t much awareness out, both there in the public or medical world about what long covid is. Doctors have not known about it when I have seen them, so i’ve tried to tell them about it.’

Emma visited hospital in March suffering with shortness of breath and chest pains, however was not severe enough to be admitted and so hasn’t been tested for the virus.

‘I didn’t test positive because in March’, she told, ‘They didn’t test you unless you were going to be admitted. 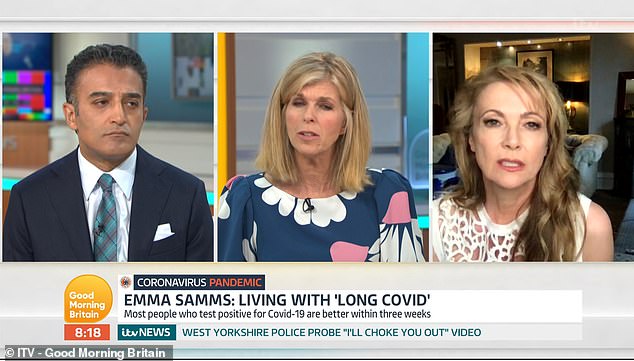 Host Kate Garraway (pictured middle), whose husband Derek Draper remains in hospital battling Covid, admitted that not having answers about the disease is something she’s ‘used to’

‘So I was seen at the hospital, I had shortness of breath and chest pains, various other symptoms, but they sent me home and said to come back if it gets any worse’.

Medical professionals don’t yet know how to treat the condition, nicknamed ‘long covid’ which is becoming more recognised within medical circles.

When asked if Emma is still in danger as a result of the virus, she confessed: ‘Nobody knows. This is the thing, i’m assuming that eventually I will get better but nobody knows.

‘Weirdly enough there are doctors i’ve spoken to who are saying, they just don’t know, this is a new virus. Those are the ones I trust the most.’

Host Kate Garraway, whose husband Derek Draper remains in hospital battling Covid,  admitted that not having answers about the disease is something she’s ‘used to’. 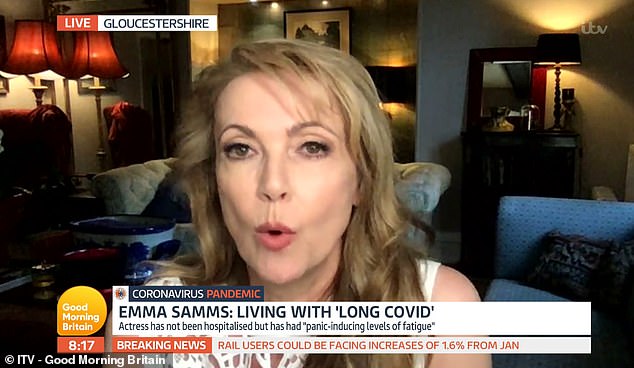 Emma explained: ‘I’ve had some scans I haven’t had an MRI scan which would show certain lung damage and certain heart inflammation’

‘That sentence is something i’m used to’, she told, ‘With the impact on Derek. And it’s a real sentence from the doctors, there are new problems with covid everyday we’re having to deal with’

She went on to ask: ‘Have you had your lungs checked out? One of the things doctors are finding is cases which where not severe enough to be hospitalised are presenting things like scarring?

‘Have you been offered a chance to go back and look now, as your symptoms have persisted?’

Emma explained: ‘I’ve had some scans I haven’t had an MRI scan which would show certain lung damage and certain heart inflammation.

‘Some studies have shown lots of people who suffered with Covid are left with that. So it’s just a bit of a mystery.’

ARE THERE LONG-TERM SYMPTOMS OF COVID-19?

Most coronavirus patients will recover within a fortnight, suffering a fever, cough and losing their sense of smell or taste for several days.

However, evidence is beginning to show that the tell-tale symptoms of the virus can persist for weeks on end in ‘long haulers’ — the term for patients plagued by lasting complications.

Data from the COVID Symptom Study app, by King’s College London and health company Zoe, suggests one in ten people may still have symptoms after three weeks, and some may suffer for months.

Support groups such as Long Covid have popped up online for those who ‘have suspected Covid-19 and your experience doesn’t follow the textbook symptoms or recovery time’.

For those with more severe disease, Italian researchers who tracked 143 people who had been hospitalised with the disease found almost 90 per cent still had symptoms including fatigue two months after first falling unwell.

The most common complaints were fatigue, a shortness of breath and joint pain – all of which were reported during their battle with the illness.

Another study in Italy showed one in ten people who lose their sense of taste and smell with the coronavirus – now recognised as a key sign of the infection – may not get it back within a month.

The study, published in the journal JAMA Otolaryngology – Head and Neck Surgery, involved 187 Italians who had the virus but who were not ill enough to be admitted to hospital.

The UK’s Chief Medical Officer Professor Chris Whitty has said the longer term impacts of Covid-19 on health ‘may be significant’.