Earlier this year, Maree Clarke visited cavernous spaces deep beneath Melbourne. In fluoro vest and hard-hat, Clarke contemplated an underground site below St Kilda Road, near the Shrine. She saw this upside-down world with new eyes, and sized up a huge tunnelling machine, responsible for extracting vast quantities of soil and rock.

Little wonder Clarke has been thinking big and deep ever since. Many would be overwhelmed by the scale of her own project: as the commissioned line-wide artist for the $11 billion Metro Tunnel Project, she is creating a single artwork connecting the five new underground railway stations – Arden, Parkville, State Library, Town Hall and Anzac. 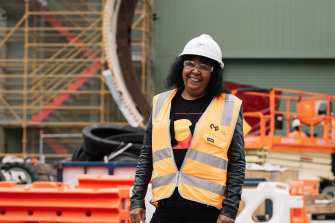 Maree Clarke inside the Metro Tunnel.

Yet Clarke is unflustered, handling it with confidence and vision. When she makes another underground visit this month deep below the Arden Station site, Clarke will continue her musings about the meaningful history of these places. Winner of this year’s Australia Council Aboriginal and Torres Strait Islander Arts Fellowship, Clarke has heritage as a Mutti Mutti, Yorta Yorta, and BoonWurrung/Wemba Wemba woman – and her driving ambition with the Metro Tunnel commission is to give future passengers a sense of Country and Indigenous understandings.

There are expected to be about half-a-million more passengers flowing through these stations each week when the tunnels open in 2025. That’s a big audience, even for the experienced Clarke, who is well-known for big public artworks. There’s a lot of historical weight behind her, too – not only the deep-time of Indigenous connections with Country, but the more recent phenomenon of underground railway art. 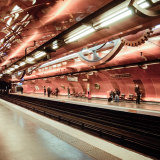 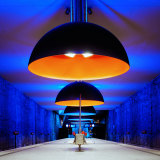 Below-ground transportation began in 1863 with the opening of the London Underground and, from the start, aesthetic considerations were important. While “the Tube” is best known for its distinctly streamlined design, curved trains and tunnels, and period London Transport posters, and some Paris Metro stations are celebrated for their romantic art nouveau style, other metro systems around the world have been far more dedicated to being artworks in themselves.

The systems underneath Moscow and St Petersburg have been especially lauded for their breathtaking designs, as have creative treatments in Munich, Teheran, Athens and even Tashkent in Uzbekistan. Highlights include Moscow’s extraordinarily ornate Komsomolskaya, Kievskaya, Mayakovskaya and Park Pobedy stations; Stockholm’s Tunnelbana (once described as “the longest art exhibition in the world”); the “dome of Light” at Taiwan’s Kaohsiung Station; Lisbon’s glittering Olaias Station; the Arts et Metiers Station in Paris with its giant cogs in the ceiling, and the four elements of nature depicted with unrestrained lavishness at Khalid Bin Al Waleed Station in Dubai (complete with jellyfish-shaped chandeliers).

Far less memorable is Melbourne’s first underground system, the City Loop. Opened in 1980, the three stations were more utilitarian commuter hubs than vibrant expressions of local art and culture. While there was some nice tiling and nods to local architecture at Parliament and Museum stations, the Loop’s spaces have never offered much more for the eye than advertising.

The new Metro Tunnel stations, designed as soaring and light-filled spaces, will change all that dramatically with their commitment to art-making. Alongside Clarke’s ambitious work there will be five other permanent “legacy” artworks – one for each of the new stations, with the artists expected to be named early next year.

It will be a long haul for them all but the strictures of the pandemic in 2020 have actually allowed Clarke extra time to focus on this gargantuan project, assisted by a team including her nephew, Mitch Mahoney, whom she mentors. 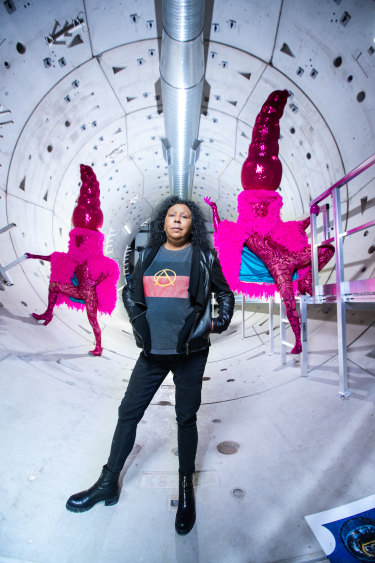 Maree Clarke and performance artists Will and Garrett Huxley at the Victorian Tunnelling Centre.Credit:Simon Schluter

Clarke was in London when she found out she’d won the Metro Tunnel commission, having presented her proposal to about 15 people many months before. “I thought I’d missed that boat,” she says. Then she woke to the call announcing she’d got the gig. “Which station?” she asked. It was all of them, she was told: the line-wide commission.

The use of lenticular prints – a lens-based technology in which printed images have an illusion of 3D depth – has been at the heart of Clarke’s proposal and she has been working on the possibilities ever since. “In my head, and I can see it, you become miniscule in the space,” she says. “How I pull it off is yet to be seen. That is the challenge. My artistic collaborator, Jeph Neale from Artery Co-operative, is the bee’s knees working on the technical considerations … so that will be a wow factor.”

Underpinning the commission is Clarke’s vision for manifesting Country in the work and touching on the five clans of the Kulin Nation, artistically replicating landscape and place with water, forest and desert themes. “This is what I would like to see in the stations, to give a sense of place and the experience of being somewhere else even though you are three storeys underground in the centre of Melbourne,” she says.

“I am thinking about what we leave for future generations, for my great-great-great nieces and nephews, even though it is not just for them but for the wider community. There will be different layers of story in each of the stations – you’ll need to ride through all five to get the full picture. I like that idea. You don’t want to give away everything at one station.”

The other five commissioned artists will have more defined spaces for their work, mostly at concourse level and near entrances. Clarke has specific challenges deeper down in the stations – having to accommodate fire regulations, multiple surfaces, light considerations and architectural elements such as columns, domes and walkways.

Jefa Greenaway, director of Greenshoot Consulting, which is managing the traditional owner engagement for the Metro Tunnel cultural program, finds the idea of being able to embed cultural stories compelling. “What better way to affirm a connection to layers of history and memory of place than to acknowledge and celebrate Indigenous culture manifested through the built environment,” he says.

“Naturally with a project like this, where you are literally boring through terra firma, there are stories that reside in Country. And as is often said in an Indigenous context, everything is interconnected. This moves beyond the cliches and stereotypes of how we frame Indigenous art. It is celebratory but also unashamedly contemporary.

“What that means is that it acknowledges that Indigenous culture is a living culture. You don’t last on this land for 67,000 years without the ability to adapt and change.”

The Metro Tunnel Project has also been busy commissioning many temporary artworks around the five new station sites, as well as at the eastern and western tunnel entrances. These aim at maintaining public engagement, but also to signal that art and culture are an important part of the project. 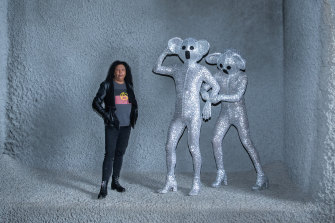 This cultural program has primarily used hoardings as canvases for the artists, and tended towards the brightly graphic in its aesthetic, from the medical research-based imagery of The Cutaway creative studio (Pretty Little Things) at Parkville, to the abstract designs of Spencer Harrison at Arden, to Spacecraft studio’s installation of printmaking backing cloths at the Eastern Tunnel entrance.

In response to the pandemic, there have also been some especially eye-catching works: photographer Phoebe Powell has celebrated the work of Parkville Biomedical Precinct staff in a moving photo essay. And from February next year, for the PHOTO 2021 festival, 16 artists from Melbourne to Dakar, Mongolia and the US will present their work across a total of 500 metres of Metro Tunnel hoarding space.

One Creative Program artist now showing his work is Stephen Banham, a designer, typographer and RMIT lecturer. Banham says one of his most interesting and memorable underground rail experiences was seeing graphics on tunnel walls while speeding through the abandoned “ghost stations” of East Berlin before the 1989 reunification of the city. “The interiors had been frozen in time,” he says.

His Metro Tunnel work, Here, There, at the State Library Station, is anything but ghostly – but it does play a trick with the eye and mind. He describes it as “a sort of typographic loop” in the way it responds to the idea of movement, repetition and time by disguising itself as a high-vis safety pattern. 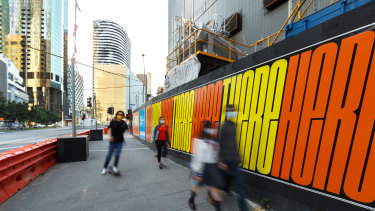 “The work focuses on the very essence of movement, namely going from here to there,” he says. “The formal similarity between these two words allows for a playful, continuous looping, giving a sense of endless activity and energy.”

While he hopes he might have channelled railway poster designers such as Abram Games or Edward McKnight Kauffer in Here, There, he is happy for people to discover quietly that the work is not the signage they might initially perceive it to be.

Meanwhile, in Swanston Street, Will and Garrett Huxley, known as The Huxleys, have been especially visible among the temporary commissions. Their Wrap Your Troubles was installed alongside the deep pit that is the Town Hall Station site, where the City Square once languished. The Huxleys have also had Physical Distancing Koalas on show at nearby Scott Alley. The duo has been excited at the way the projects have brought their art to people who usually might not see it. 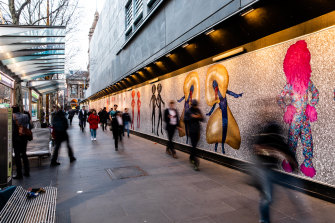 Melburnians walk past temporary hoardings by the Huxleys. Credit:Charlie Kinross

“For us, it was extra special as we are queer artists who often put that at the forefront of our work – and this [Wrap Your Troubles] was a pretty loud, lurid piece,” they say.

“Our images and costumes strive to remove binaries and take away gender, race and body type. There is an androgynous, amorphous freedom in the work and it can be challenging to some more conservative people. Having this camp spectacle out in the world was such a validation for us. We thought of it as like the Huxley family portrait. All these costumes and characters we have created coming together in this way, celebrating fashion, performance and queer identities … it was awesome.” 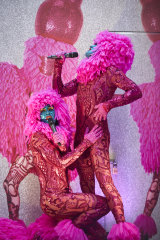 The Huxleys perform for the Metro Tunnel Project: “We got to … create one of the gayest spectacles the city has seen in some time.”

They have received vastly more feedback on the work than with previous pieces and performances. “People told us they had written to the council and asked if it could be a permanent installation. For us, it’s also important to take our voice and our work into spaces where it might not be wanted, as that is how you challenge people’s ideas and perhaps get them to see a wider, more diverse world and accept differences.”

As part of the Wrap Your Troubles work, the Huxleys teamed with Melbourne Fashion Week to do a glittering runway performance. “We got to sing and perform Donna Summer’s I Feel Love and create one of the gayest spectacles the city has seen in some time.

“We often lament the changing Melbourne and the abundance of construction in the city. To turn the grey surface of a hoarding into a sparkling surreal runway: that is a definite positive."

Have a Good Weekend all week

We deliver the best of Good Weekend to your inbox so it’s there when you’re ready to read. Sign up here. Sent every Saturday.