Scott Morrison loves a celebrity. Under his watch, his favourite singer Tina Arena got a spot on the board of the Australia Council for the Arts, Ita Buttrose was appointed ABC chair and “Australia’s favourite tradie” Scott Cam received a plum job plugging vocational education.

And when it comes to finding Liberal candidates to run in marginal seats, the Prime Minister is also partial to a big name. So it’s no surprise that when Gladys Berejiklian suddenly became available after resigning as NSW premier, he saw an opportunity to win back the formerly blue-ribbon seat of Warringah with her name on the ballot. 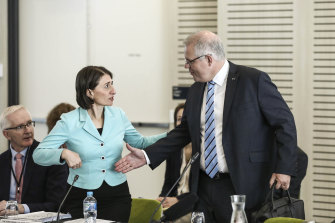 Never mind that the corruption investigation which caused Berejiklian to quit is ongoing, with the Independent Commission Against Corruption yet to hand down its findings about her secret affair with disgraced former MP Daryl Maguire. She denies any wrongdoing.

The failed attempt to recruit Berejiklian, finally scotched by her on Friday, has prompted a number of questions about Morrison’s tactics and motives. Why was the “Gladys for Warringah” campaign played out so publicly? Was the whole thing just a ruse and a diversion? And what has it shown us about the PM’s position on matters of corruption and integrity in public life?

Morrison’s desire to find a star candidate for Warringah is understandable. It will be a huge task to win the seat back from Zali Steggall, who wiped Tony Abbott out of a job he had held for 25 years. Former NSW premier Mike Baird, a Manly local, was the first recipient of Morrison’s overtures. But Baird couldn’t be lured back from the private sector, where he was a well-paid NAB executive and then CEO of HammondCare.

The Herald has seen private polling from September that put the Liberal Party’s primary vote in Warringah at just 32 per cent. At the 2019 election Abbott’s primary vote was 39 per cent; at the 2016 poll it was 51.6 per cent. The party has reportedly conducted polling that showed Berejiklian could win back the seat.

Meanwhile, in recent days much attention has been paid to independent candidates launching their campaigns against Liberal incumbents in Sydney and Melbourne, and the Labor opposition has laid the groundwork for the election with major policy announcements on climate and education.

This has led to much conjecture that Morrison’s public arm-twisting of Berejiklian was as much a distraction – the proverbial “dead cat” – from other events as it was a genuine attempt to convince the former premier to have a crack.

In early October, just days after Berejiklian quit as premier, The Guardian first reported she had been approached by senior Liberals about running for Warringah. But it wasn’t until late November, with Federal Parliament in its final frenzied sitting fortnight of the year, that the drumbeat really began.

Morrison called the ICAC a “kangaroo court” in question time. He said it had traduced Berejiklian’s integrity and invaded her privacy. “These [agencies] should be looking at criminal conduct, not who your boyfriend is,” he said. “The Australian people know that Gladys Berejiklian was done over by a bad process and an abuse of process.”

Stories soon appeared that said Morrison was confident he could get the former premier to run. Then last weekend, the Herald reported Berejiklian was considering the offer, and that Liberals didn’t see the ICAC cloud over her head as an impediment to her candidacy. 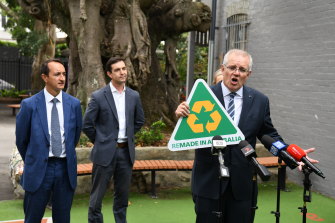 Prime Minister Scott Morrison said Gladys Berejiklian had been the victim of a “pile on”.Credit:Dean Sewell

On Monday morning, the ABC asked Finance Minister Simon Birmingham about the idea. He said he would love to see Berejiklian run and “it’s pretty sad when ICACs go out and destroy reputations, do so in pretty murky ways, looking into relationships and other things”.

Later on Monday, journalists asked Morrison about it at a press conference in Woollahra, and he really lit the fuse. The Prime Minister again trashed the ICAC for “shaming” Berejiklian. He said Warringah was a “great opportunity” for her. He insinuated there was a political dimension to Berejiklian’s demise.

“What I saw is a pile on and, you know, we’re all pretty used to pile ons on our side of politics. I see them all the time,” Morrison said.

A slew of high-profile Liberals – Abbott, John Howard, Bruce Baird among them – backed Berejiklian’s potential tilt. Baird acknowledged there was some danger in it if the ICAC’s findings turned out to be worse than expected. But most Liberals were dismissive, believing she would only be pinged for failing to disclose her relationship with Maguire, and that most voters wouldn’t care anyway.

On Tuesday, hundreds of Liberal Party members and donors gathered for drinks at the Four Seasons hotel on George Street, one of many end-of-year functions keeping gossip in healthy supply. Word went around the room: Berejiklian wasn’t going to run for Warringah, and the leading alternative candidate, barrister Jane Buncle, ought to prepare her nomination.

Several Liberals lamented that Morrison’s attempts to install Baird and then Berejiklian will make Buncle (or whoever is preselected) appear to be a candidate of last resort. “The net impact is a bad one in the actual seat itself,” said one. “Whoever the candidate is looks like a giant loser.”

More broadly, there is consternation in the party about Morrison and his lieutenants over-riding local pre-selections to impose hand-picked candidates (though party leaders always do this to some extent). In 2019, Morrison installed Warren Mundine as the Liberal candidate for Gilmore (it became the only seat the government lost to Labor, apart from those with heavy redistributions), and one of the PM’s fixers, Scott Briggs, offered Kent Johns a lucrative party job in exchange for discontinuing his preselection challenge against then-Liberal MP Craig Kelly in the seat of Hughes.

The threat of federal intervention into preselections has prompted some NSW Liberal officials from the party’s right faction to seek legal advice, as first reported by The Australian this week.

Yesterday afternoon, Morrison was asked on 2GB if he stood by his “kangaroo court” remarks about the ICAC. “It’s about how information was being disclosed in the public arena about some of the most personal things. That’s not justice, it’s not,” he said.

Labor seized on Morrison’s ICAC commentary as proof the Coalition was never serious about instituting a rigorous corruption watchdog at a federal level.

Opposition Leader Anthony Albanese summarised the Prime Minister’s Berejiklian thought bubble as “day after day of front-page headlines all leading to nothing except that Scott Morrison has reinforced his contempt for a national anti-corruption commission and his contempt for proper processes in the way he has attacked a body such as the ICAC”. 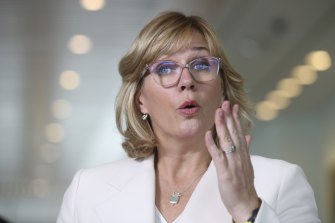 “It was an own goal … they really do not get it”: Warringah MP Zali Steggall.Credit:Alex Ellinghausen

Berejiklian’s decision to let the speculation run wild for a week provided plenty of opportunity for people to wax lyrical about her popularity and the insignificance of the ICAC cloud.

Liberal MP for Mackellar Jason Falinski told the Herald he believed “most people in NSW have discounted the ICAC”, and only the media gave the agency any credibility.

Those kinds of comments will certainly be picked up by independent candidates putting integrity and due process at the centre of their electoral pitches. Steggall says the public campaign to get Berejiklian into Warringah was “definitely a stunt”, but one that would backfire.

“The commentary we’ve had from very senior people dismissing the implications of an ICAC investigation and allegations of corruption shows the greater malaise around attitudes towards integrity. Where is their moral compass? Where is their sense of right and wrong on matters of public interest? They really do not get it,” Steggall said on Friday afternoon.

“I think it was an own goal in that it put the spotlight on where [Morrison’s] compass is in terms of integrity and accountability, and clearly it’s not pointing in the right direction. In sharp contrast you’ve got Dominic Perrottet, NSW Premier, saying ‘no I don’t agree, we have to respect this process, it has been incredibly effective in catching instances of corruption’.”

[Asked by the Herald’s state political editor Alexandra Smith about his colleagues’ criticism of the ICAC on Wednesday, Perrottet said it was important to instil confidence in integrity agencies, not undermine them.]

It wasn’t just Labor or independents who suggested Morrison was using the Berejiklian pipe dream as a useful distraction from other issues – plenty of Liberals thought as much too. And the rampant speculation had an additional benefit; the off chance she might change her mind. 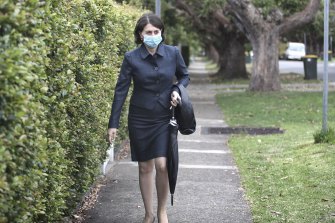 That was always going to be unlikely, especially given who it was that was asking for her help. Berejiklian has previously denied a Herald story which said she privately regards Morrison as an “evil bully”. They both say they enjoyed a good, productive relationship during the most difficult moments of the pandemic. But it is hard to find a Liberal who describes them as close.

Liberal MP Tim Wilson said it would be a “Christmas miracle” if Berejiklian ran, and in the end it proved to be one miracle Morrison couldn’t pull off. On Friday morning the former premier called into Ben Fordham’s final breakfast show for the year on 2GB radio and made clear just how much thought she had given the Warringah proposition: not a lot.

“It wasn’t something that I intended to do, but out of respect for those people who I’ve got respect for I gave it some thought,” she said. “I promised them I would, and I did for a very short period of time and then obviously let them know that it’s not something I want to pursue.”

The former premier didn’t rule out federal politics forever, but she said it was “not something I would consider for a very, very, very long time”. Like her predecessor Baird, Berejiklian intends to work in the private sector. Before entering state politics she was a Commonwealth Bank manager, and according to people close to her, banks have approached her since she quit the state’s top job – though any finance role she took now would clearly be much higher up the chain.

On Thursday, once Berejiklian had told Morrison ‘thanks but no thanks’ on Warringah, the Prime Minister’s office provided journalists a statement outlining his respect for her decision to go in a “different direction”. As well as making two references to his wife Jenny, Morrison stressed his commitment to recruiting “great women” and fielding strong female candidates at the election.

His remarks will be a boost to Buncle, a barrister who also does pro bono work for the Refugee Caseworker Service, directs a youth homelessness charity and volunteers as a Manly lifeguard. Buncle is now in the box seat for preselection, and the Herald has confirmed management consultant and NSW Liberal Party state executive member Alex Dore will not nominate.

On Friday afternoon, ex-Woolworths boss Roger Corbett, who as former president of the Liberal Party’s Warringah electorate committee ran Abbott’s campaign, said that “like any other seat in Australia, the residents of Warringah are entitled to have a very good representative”.

Asked whether the eventual candidate would inevitably be seen as third-rate after the attempts to install a celebrity, Corbett cautioned that in politics, you can never say never. “It’s a hypothetical,” he said. “We don’t know who the candidate is yet. Who knows, it might be John Howard.”