America and the world got a taste of presidential vandalism this week and there is every indication that there is more — much more — to come.

The first hint came in the wee hours of Wednesday morning when, from a White House podium against a forest of American flags, Donald J. Trump falsely claimed victory in the 2020 election and then, outrageously, demanded that vote-counting stop immediately.

In doing so, he violated the long-standing practice in a U.S. election that a winner declares victory only after the loser has called to concede and then publicly congratulated the winner.

But here was Trump the perverted populist, a man who, throughout his time in the White House, has disregarded reality when it failed to suit him. 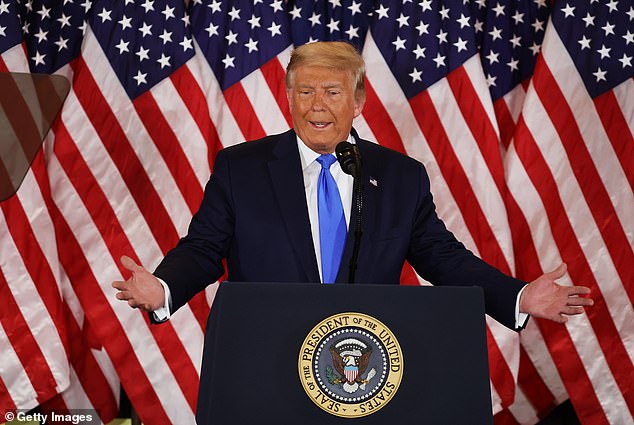 No matter that he was behind in the vote; never mind the laws requiring that all ballots be counted.

He had one goal, which was to cast doubt on the legitimacy of the election. And he dealt the first blow as soon and as hard as he could.

With legal actions now launched by the Trump campaign in Michigan, Georgia, Pennsylvania and Nevada, he’s not backing down.

Forget a gracious acceptance of the will of the electorate. I reckon we’re in for a rocky ride over the next 11 weeks until Joe Biden will, in all likelihood, be sworn in as the 46th president.

My certainty that Trump will continue to strike out as his presidency enters its death throes is rooted in his own words to me over the past three decades, in his speeches and especially in his book, Think Big, in which he declares that his life philosophy is a single word: revenge.

Over 16 pages, Trump describes his desire to commit violence against those who challenge him. 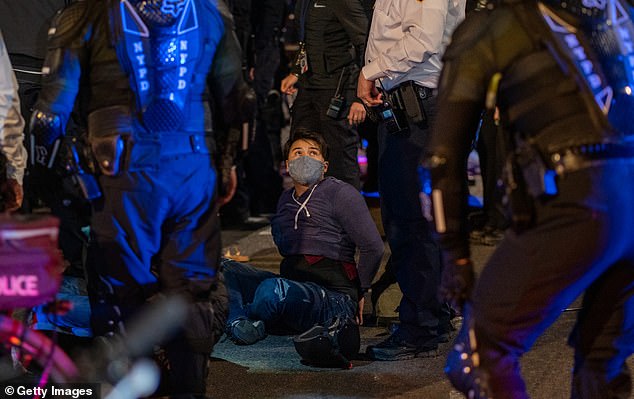 Forget a gracious acceptance of the will of the electorate. I reckon we’re in for a rocky ride over the next 11 weeks until Joe Biden will, in all likelihood, be sworn in as the 46th president. Protesters are seen above in New York

He writes that what gives him pleasure is destroying the life of anyone who refuses his demands.

He focuses on one Trump Organisation executive who, for ethical reasons, declined to place a telephone call. He describes her firing, her divorce, business failure and eviction from her home and his increasing pleasure at each stage of her worsening misery.

‘If you don’t get even you are just a schmuck!’ Trump wrote. ‘I really mean it, too.’

Four years ago, when Trump lost the popular vote to Hillary Clinton but narrowly won the all-important Electoral College that made him president, I warned that his presidency would end badly.

Just how badly I couldn’t begin to guess. As events of the past 48 hours confirm, he is not a man to acknowledge defeat, let alone accept it.

Since the start of his presidency, he has been laying the ground for what is happening now, insisting that if he is denied a second term it will be because the Democrats rigged the vote.

So apart from the toxic aftermath of election day, the shaming of the democratic process (which has no doubt put a smile on the faces of China’s President Xi and Putin in Russia) and a bitterly divided nation on the brink of explosive violence in some states, what will be Trump’s legacy?

His handling of the coronavirus pandemic has been a factor in his defeat by Biden.

With 300,000 more deaths than normal in America this year (of which some 230,000 have been confirmed as due to Covid-19) and 100,000 new cases being reported daily, how could it be otherwise? Tens of thousands more deaths are likely between now and Inauguration Day in January.

That is why I expect Trump to deliver on his threat to fire Dr Anthony Fauci, the U.S. Government’s top infectious disease expert, who has made no secret of his disagreements with the president. Someone has to take the blame — and it’s never The Donald. 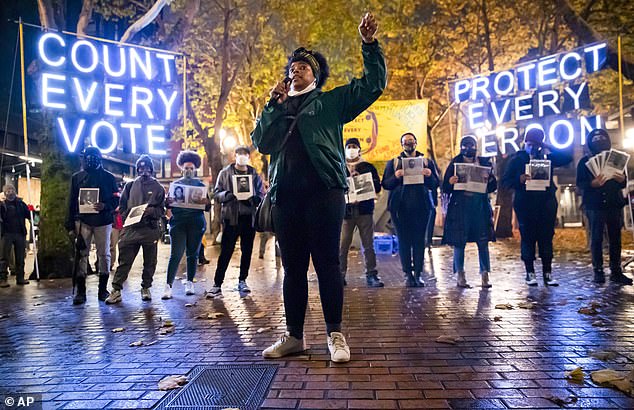 Four years ago, when Trump lost the popular vote to Hillary Clinton but narrowly won the all-important Electoral College that made him president, I warned that his presidency would end badly. Just how badly I couldn’t begin to guess. Activist Travonna Thompson-Wiley is seen speaking at the Count Every Vote – Protect Every Person rally in Seattle

The havoc he has wreaked elsewhere over the past four years has been the focus of our coverage at DCReport.org, a non-profit news service that friends and I started in 2016 to monitor what Trump did, rather than what he tweeted.

He certainly delivered on his first campaign promise to ‘deconstruct the administrative state’.

That was fancy talk for destroying the federal government and backing big business, regardless of the consequences.

Trump & Co laid into the various federal agencies, letting loose executives and lobbyists whose job has been to weaken or destroy these institutions. I call them political termites because, like those pests, they silently eat away at the structure, unseen until the damage is severe.

At the Education Department, for example, executives working for the student loan industry were assigned to deal with the trillion-dollar debt incurred by students, many of whom received loans to attend commercial colleges that turned out to be scams and were shut down.

The Trump administration took the side of bankers against the student borrowers who were victims of these scams. 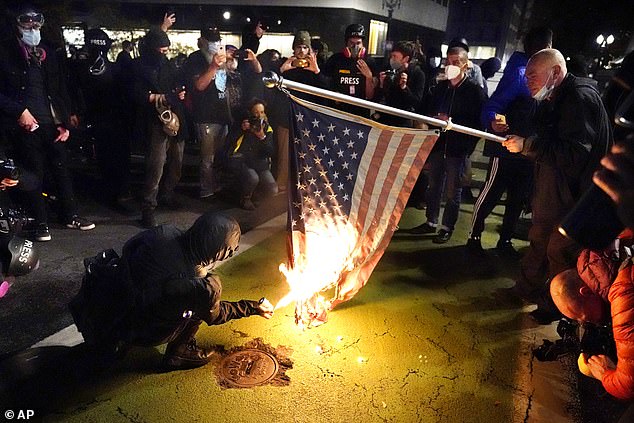 He certainly delivered on his first campaign promise to ‘deconstruct the administrative state’. That was fancy talk for destroying the federal government and backing big business, regardless of the consequences. Protesters are seen burning an American flag in Portland

Staff at the Environmental Protection Agency were forced to write reports detailing weaknesses in enforcement policies — information that was subsequently acquired by those representing businesses known to be polluters of water sources, who could exploit those weaknesses for their own ends.

Rules established by the Obama administration to prevent ponds filled with coal slurry, a toxic legacy of coal-burning electric power plants, from collapsing and ruining drinking water supplies were set aside, to the delight of the firms responsible. So were rules to limit toxic emissions from smokestacks and to enforce safety rules in coalmines — again helping profit margins, not protecting people.

Trump may yet escape federal accountability for all the damage he and his team have done. What he won’t be able to escape are the civil lawsuits and state prosecutions piling up.

Losing the White House means he loses immunity from trial on criminal charges. Indeed, he told one of his last campaign rallies that he might leave America if he lost the election.

And why wouldn’t he, given that he faces a miserable and expensive future tied up in criminal and civil legal proceedings — and perhaps even a New York state prison cell.

Donald Trump is under criminal investigation by a Manhattan grand jury which is looking into suspected bank, insurance, tax and other fraud (Trump says this is politically motivated).

A New York state attorney general’s civil investigation has dropped subtle legal hints that it is building a case against Trump, some of his children and The Trump Organisation for allegedly running a racketeering enterprise.

Indictment on racketeering charges would allow prosecutors to immediately seize his assets, including Trump Tower, his golf courses and Mar-a-Lago, his beloved Florida estate, as the fruits of criminal enterprise.

To a man who measures his life by how much money he can grab, even when cheating, lying and conning are involved, that would be a devastating blow.

On top of this, a bevy of women are suing Trump for sexual assault, slander and other civil offences. The most troublesome for Trump is a lawsuit by the writer E. Jean Carroll, who alleges he raped her in a department store fitting room in the 1990s and defamed her with his denial.

Oh, and there is the small matter of an estimated $900 million in loans due in the next four years.

Donald Trump may pay a high personal price for his conduct. But sadly it is the American people who are left counting the long-term cost of his legacy — in the lasting damage to their health, safety and welfare, and to America’s standing in the world.

David Cay Johnston is a Pulitzer Prize-winning investigative journalist and the author of The Making Of Donald Trump. 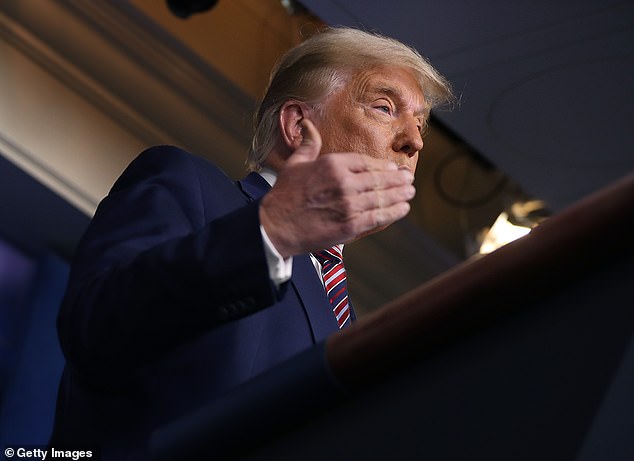 Once Trump leaves office, he also faces possible federal prosecution for the same crimes for which Michael Cohen, his long-time lawyer and fixer, was convicted and imprisoned