DAN HODGES: Enough plotting and sniping! Tory clan elders must bury Boris Johnson… or back him

The clan elders are moving,’ the Tory veteran told me. ‘I think the names [to trigger a leadership election] will probably be in by the 6th, maybe the 7th or 8th of June. But even if Boris survives that, then we have the two by-elections. And unless he manages to win one of them, then that will be it. There will be a challenge.’

The elders certainly are moving. On Tuesday night, around 40 of them were spotted creeping surreptitiously towards The Surprise freehouse in Chelsea – named after a captured French corvette used by Nelson’s sailors to sneak up undetected on the enemy – to plot their post-Partygate steps.

Those who assembled claimed their gathering was entirely innocent, the timing completely coincidental. ‘We spent most of the evening listening to Grant Shapps talking about rail policy,’ one attendee insisted.

Come off it. With the Prime Minister’s future hanging in the balance, and the publication of Sue Gray’s report into the Downing Street parties a few hours away, the assembled Ministers and MPs didn’t smuggle themselves across South-West London solely to partake in the pub’s gin-cured ChalkStream trout and Stokes Marsh farm ribeye. They knew precisely what they were doing and why they were doing it. 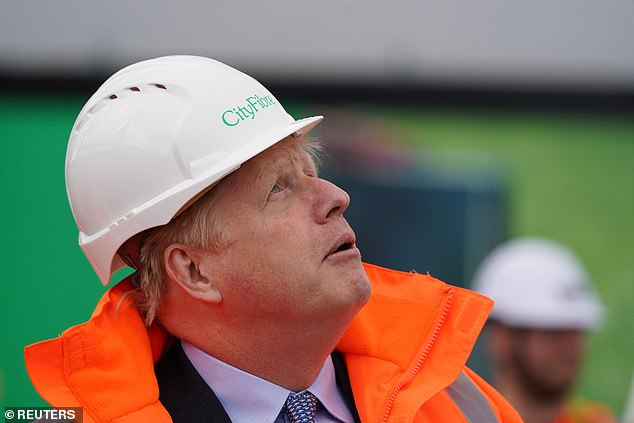 Precisely how many more traps are Conservative MPs planning to set? And how many more times are they going to watch Boris wander blithely through them before they realise enough is enough?

No 10 was hoping last week’s Graywash report would end the threat to his premiership. But it hasn’t. The letters of no confidence are again trickling in. The number of voices calling for Boris to step down is increasing. And the various leadership campaigns are preparing.

‘I’m ready to go,’ one contender admitted to me. ‘I’m not walking up to colleagues saying “I want you to back me”. But my team’s in place.’

As are those of about a dozen others. Jeremy Hunt. Liz Truss. Ben Wallace. Tom Tugendhat. Penny Mordaunt. Rishi Sunak. Nadhim Zahawi. Sajid Javid. Kit Malthouse. Dominic Raab. James Cleverly. Mark Harper. These are just some of the names that have been mentioned as potential challengers for the throne.

But each of them is acutely conscious of that old adage that the hand that wields the knife never gets to hold the mike of the No 10 karaoke machine. And so for the moment they are simply watching and waiting.

For what exactly? It’s now seven months since the Partygate scandal broke. In that time we have seen Tory MPs stretching a series of tripwires across Downing Street to ensnare their leader.

First we were told they were awaiting the publication of the Sue Gray report before moving against him. Then, when the police intervened, the knifing was supposedly to come as soon as the first fines were announced. Then it was when the voters delivered their verdict on those fines in the local elections. Then it was back to the completion of the police investigation. And then back again to the publication of Gray’s report.

Now the briefing is that it will be after the electoral tests in Wakefield and in Tiverton and Honiton. Or possibly in the wake of yet another Partygate investigation, this time by Harriet Harman’s parliamentary privileges committee. 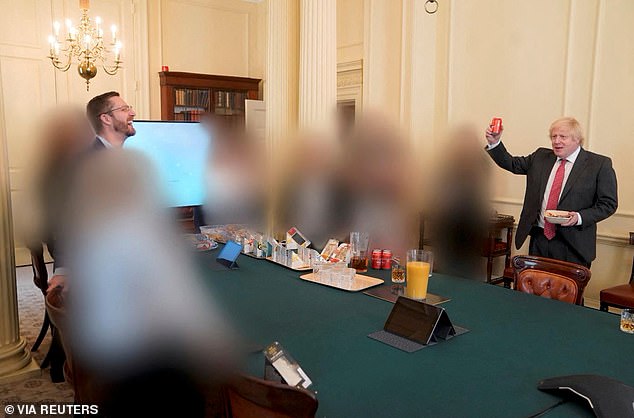 The Partygate saga needs closure. And there are only two ways for that to happen. One is for rebellious Tory MPs to move against Boris and try to unseat him

Precisely how many more traps are Conservative MPs planning to set? And how many more times are they going to watch Boris wander blithely through them before they realise enough is enough?

Just what is it that his ministers and backbenchers are hoping to learn about our Prime Minister from Ms Harman and her committee that they don’t know already? The police investigation was shambolic. The Sue Gray report a classic exercise in Civil Service obfuscation and doublespeak. But all the relevant facts have emerged.

Boris and his officials told the nation to stay at home. Then they partied. They lied about partying. And they broke the law while partying. To some of us, that is an obvious resignation offence. But others take a different view. They see a Prime Minister who gets the big calls right – Brexit, the vaccine, Ukraine. A leader who cocks a well-needed snook at an entitled, liberal establishment. And who can reach parts of the electorate that other Tory politicians cannot.

Which is fine. Debating the merits and demerits of our political leaders is a fundamental part of our democracy.

But serious leadership is also an essential element of that democracy. Which is why it’s now time for the members of the nation’s governing party to put up or shut up.

And grow up. We are in the midst of a major European war. We are only just emerging from a pandemic that has claimed millions of lives and only just beginning to reap the global economic whirlwind following in its wake.

The Partygate saga needs closure. And there are only two ways for that to happen.

One is for rebellious Tory MPs to move against Boris and try to unseat him. They have done it to leaders before – both at a time of international conflict and to prime ministers who have held much larger electoral and personal mandates. 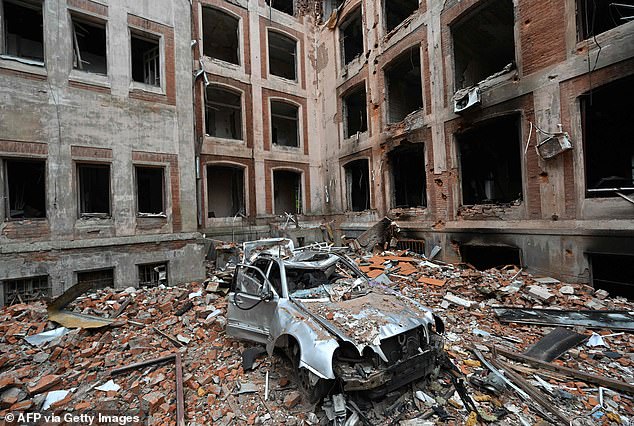 We are in the midst of a major European war. We are only just emerging from a pandemic that has claimed millions of lives and only just beginning to reap the global economic whirlwind following in its wake

So let us hear no more craven and self-serving excuses of the sort we heard from Scottish Tory leader Douglas Ross, who said Boris should resign, but only once the war in Ukraine was over. As one Tory MP pointed out: ‘Russia and Ukraine have been at war for 500 years. So Douglas isn’t exactly being brave.’

This isn’t a difficult decision. And it’s a binary one. Either the Prime Minister is the right man to lead Britain through our latest fiery trial or he isn’t. And if his MPs think he isn’t, then each and every one of them has a duty to remove him.

But the converse is also true. If they don’t feel the need to act – or don’t feel able to act – then they are now equally duty-bound to back him. Because things cannot carry on like this. The plotting. The sneaking. The sniping.

A couple of weeks ago one Tory rebel texted me in despair. ‘He has to go,’ they said. ‘But no one believes there are enough votes to beat him in a vote of no confidence. People are spineless. They are pathetic. It’s just awful.’

They are. And the whole country can see it. A political party that at a moment of national economic crisis is more interested fighting amongst and against itself than it is in protecting the British people. 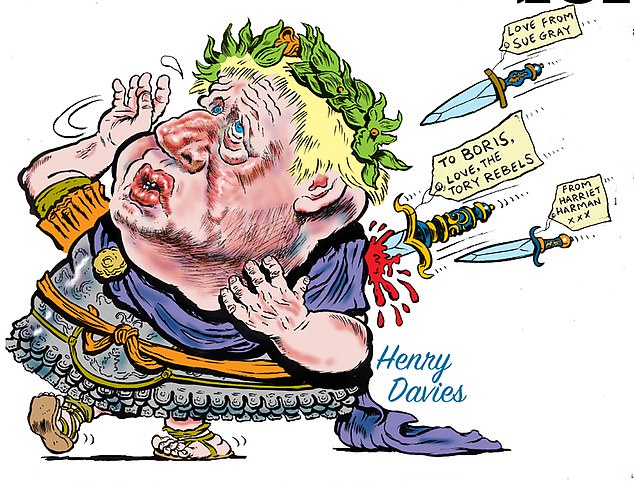 There is nothing enigmatic about the current resident of No 10. What you see with our Prime Minister is what you get. And all you will ever get

There have been enough secretive dinners. Enough stealthy gatherings. Enough furtive WhatsApp messages. The time has come for Tory MPs to back Boris or sack Boris.

Because one thing they won’t be getting is a new Boris. There is nothing enigmatic about the current resident of No 10. What you see with our Prime Minister is what you get. And all you will ever get.

A man who is pragmatic. And untrustworthy. Who can be dynamic but also selfish. Who can paint a vivid and compelling vision, yet flies from hard reality and truth.

On Friday, The Guardian sent a journalist to Downing Street in Farnham, Surrey, in a stunt clearly contrived to find a groundswell of anti-Boris opinion among local residents. But they were disappointed. As the paper noted, ‘most are angry, but want to move on’.

The residents of Farnham’s Downing Street are right. It is indeed time to move on from Partygate. The question Tory MPs must now answer is whether they move on with Boris or without him.