A furious dad has told how he banned his parents from seeing his nine-month-old daughter alone after they took her to get her ears pierced without his consent.

Taking to Reddit, the anonymous man, 22, explained how he and his fiancée, 23, had agreed that it was going to be up to their daughter Thalia when she was older to decide if she wanted to get her ears pierced.

Despite his parents insisting it would ‘look cute,’ he was adamant he wasn’t ‘into the idea’ – so was shocked to find out that when they babysat for them once, his mother asked one of her friends to do it behind their backs.

He penned: ‘We stopped talking to them after that for disrespecting our decision. Everyone was saying we were making a big deal and we can’t cut them out of their granddaughter’s life over something like that.’

Instead, the couple agreed to only let his parents see Thalia when they were with present and to not let her out of their sight when she was around them.

And many argued that the man had every right to put strict rules in place – adding it wasn’t just about the ear piercing, but more so the ‘blatant disregard for the parents’ wishes.’ 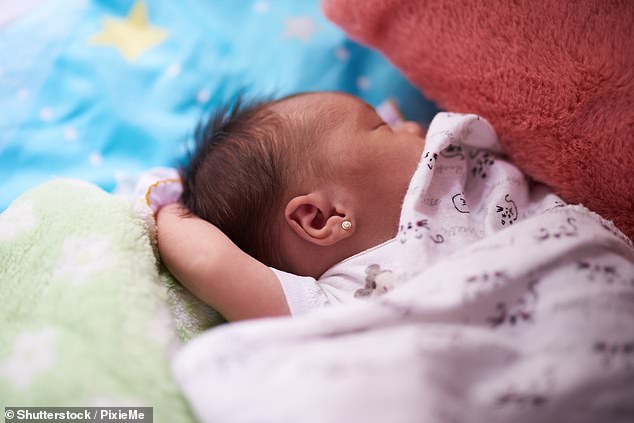 A furious dad, from the US, has told how he banned his parents from seeing his nine-month-old daughter alone after they took her to get her ears pierced without his consent. Pictured, stock image

In the initial post, the man explained how he wanted to wait until his daughter was old enough to be able to offer her consent.

He also added that his fiancée’s parents pierced her ears when she was a baby and told how she had ‘always hated wearing earrings.’

However, his parents were on board with the idea and were eager for her to get her ears pierced – despite the couple being set on their decision.

The man went on to explain how it quickly went downhill when his parents went behind their backs, leading to him banning them from having any access to Thalia daughter without him or his fiancée being present. 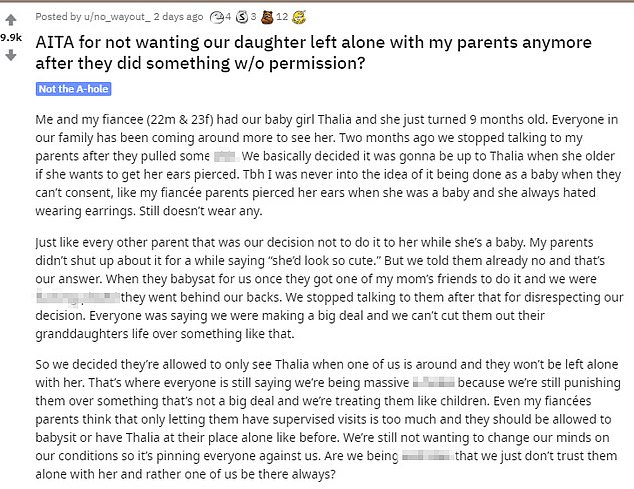 Taking to Reddit (pictured), the anonymous man, 22, explained how he and his fiancée, 23, had agreed that it was going to be up to their daughter Thalia when she was older to decide if she wanted to get her ears pierced – but his parents took her behind their back instead

He continued: ‘That’s where everyone is still saying we’re being massive a**holes because we’re still punishing them over something that’s not a big deal and we’re treating them like children.’

He went on to say how even his fiancée’s parents think that only letting them have supervised visits is ‘too much’ – adding that they should be allowed to babysit or have Thalia at their place alone just like they did before.

However, the man told how he remained adamant that he does not want to change his mind – with many saying that he is in the right.

‘I wouldn’t be leaving my child with them ever again,’ wrote one, while a second agreed: ‘Yeah. It’s not about the ear piercing. It’s about blatant disregard for the parents’ wishes. You can’t trust people who not only will do things you don’t want them to do, but also refuse to apologize for what they did, dismissing it.’

Taking to the comments section, one person penned: ‘It’s not about the ear piercing. It’s about blatant disregard for the parents’ wishes’ (pictured)

Meanwhile, a fourth commented: ‘Agreed! Not only is it a disrespect to the OP and their fiancee but they also took away their grandchild’s choice-which was the whole point OP was having about allowing their child to decide later what she would like.’

Another wrote: ‘”What’s going to be next thing they decide they know better on?”

THIS. They’ve just shown you that they don’t respect the decisions you have made about the raising of your own child, and to me that would mean they can’t be trusted to follow any future rules/decisions that you decide on.’