Couple who bought an 18th century barn conversion for £563,000 transform the small, cramped rooms into open-plan spaces for family living with their baby daughter – but go £30,000 over their £60,000 budget

TV producer Josie and anti-corruption expert Duncan, from Southwick, West Sussex, bought the three-bedroom cottage for £563,000 then set about transforming the cramped configuration of small rooms into open-plan living spaces for family living. Their daughter Ruby was born just three days after they received the keys to the house.

The pair said the move was particularly special because it represented their first family home, having tragically lost three babies before finally welcoming Ruby.

After confessing they felt ‘daunted’ by the challenge of converting the property, they got to work knocking down walls and moving bathrooms within the space.

But when George returned to see their progress after six months, the pair admitted they had spent £30,000 over their original £60,000 budget. 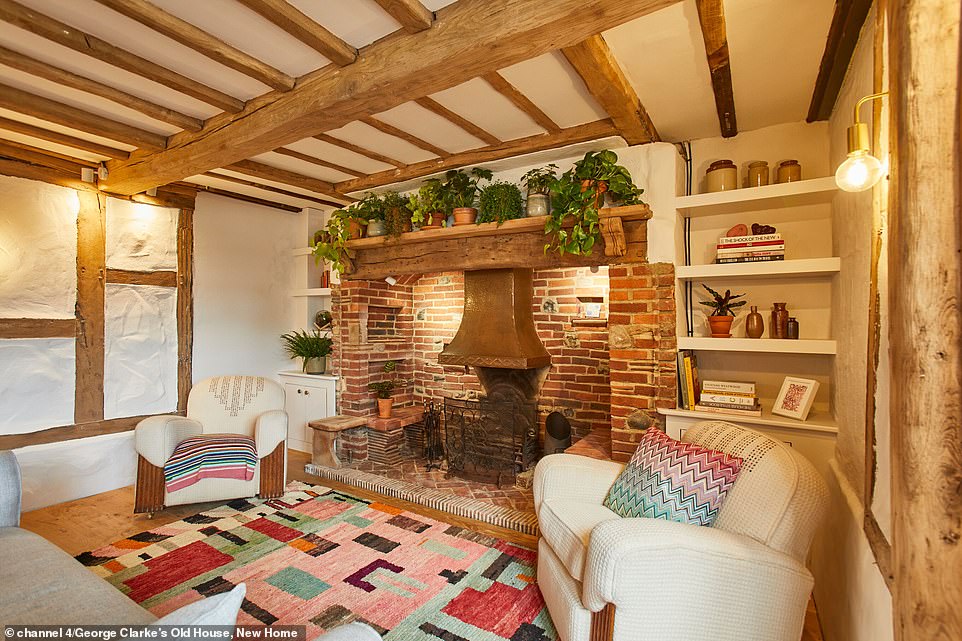 TV producer Josie and anti-corruption expert Duncan, from Southwick, West Sussex, appear on the Channel 4 programme to showcase the makeover of their three-bedroom cottage. Pictured, one of the snug living spaces after the transformation 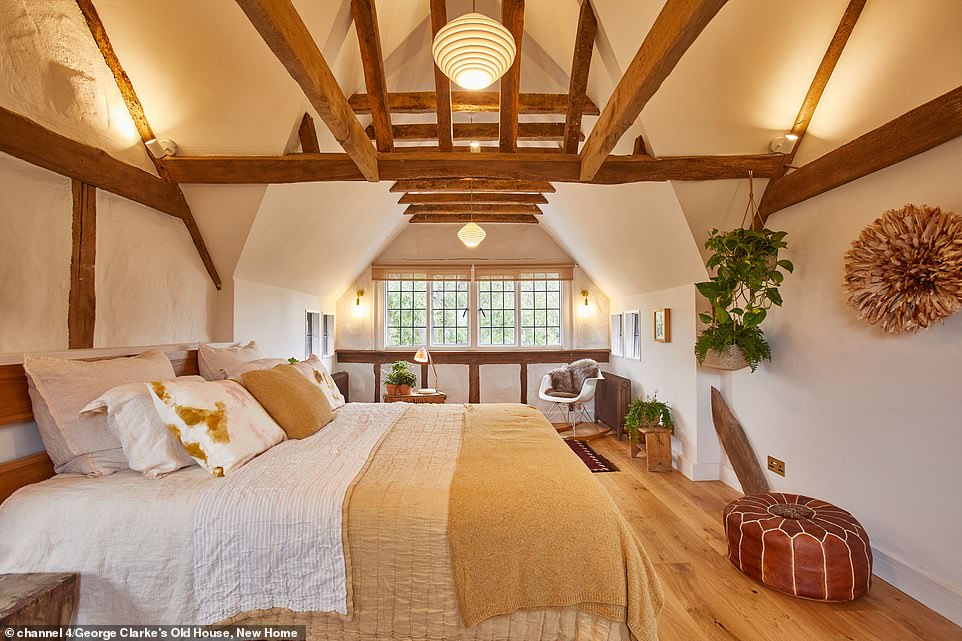 The couple set about making the barn conversion as modern and bohemian in style as they could, while retaining the original features of the property. Pictured, the large master bedroom with beautiful vaulted ceiling and beams 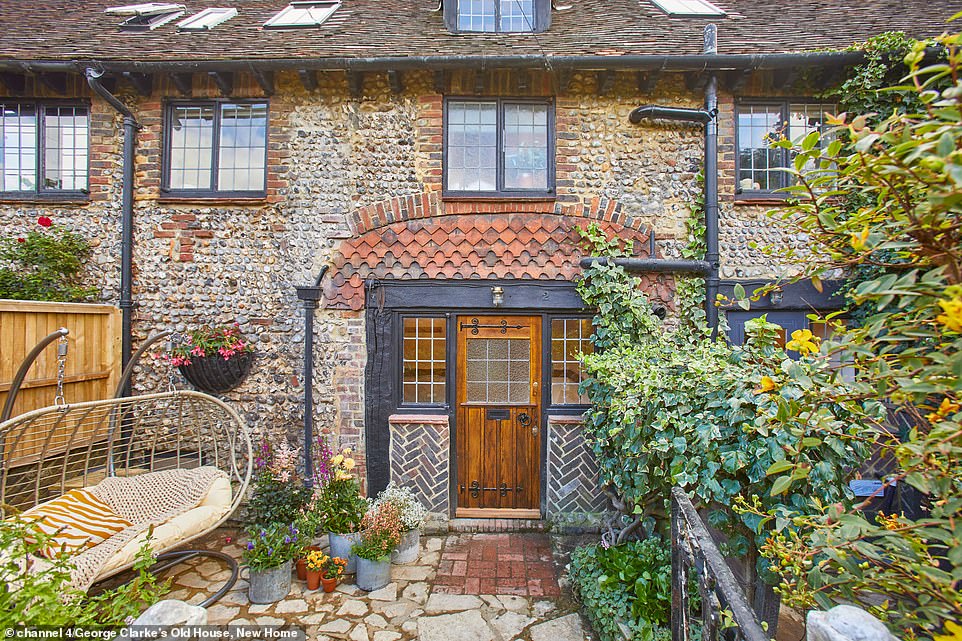 When George first met the couple, they showed him around their 18th century barn conversion – which had come with some unique problems.

And Josie confessed it had all happened at a very busy time for the family, explaining: ‘We completed on the house three weeks ago, we got the keys on the Friday and the baby arrived on the Monday.

‘It’s just been a bit of a crazy whirlwind.’

Having sold Josie’s flat to finance the renovation, they explained they were all squeezed into Duncan’s flat and paying two mortgages.

On the ground floor, the cramped layout didn’t work for family life and the decor was dodgy. Meanwhile, directly off the entrance hall was a loo, a large sitting room and a tiny cut off kitchen.

The kitchen was a vision of Tudor fairground stripes, and cramped.

Josie admitted: ‘We’ve bought a bit of a wreck, haven’t we? Over the years, people have just done that room there or that one there and haven’t looked at it in terms of the whole space, so that’s giving us a bit of a headache.’ 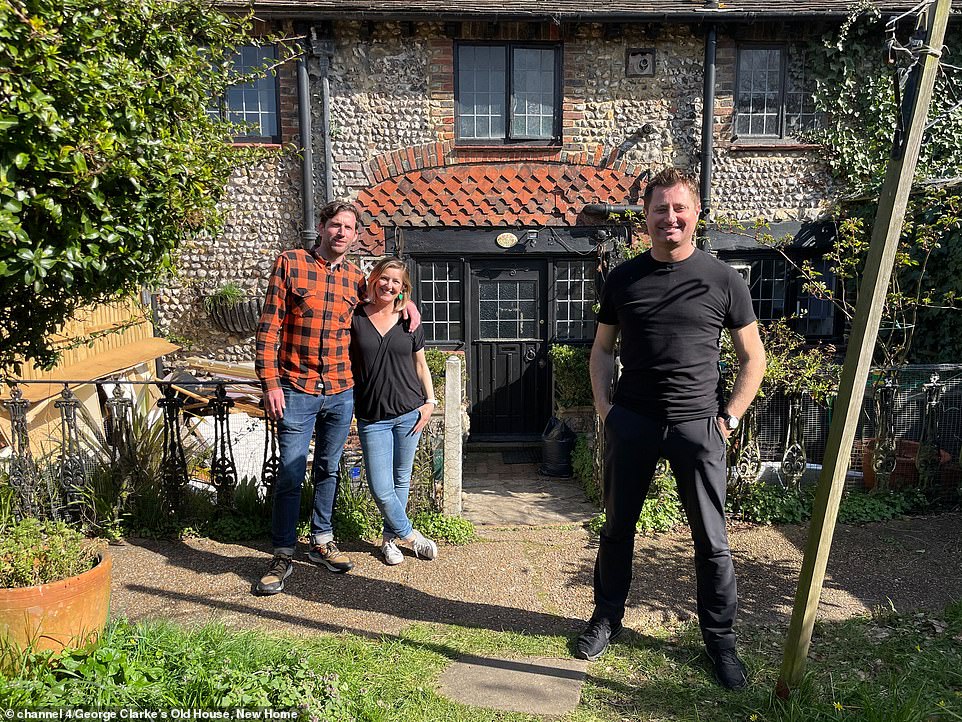 Josie and Duncan, pictured with George Clarke, welcomed their first daughter days after moving into the 18th century barn conversion 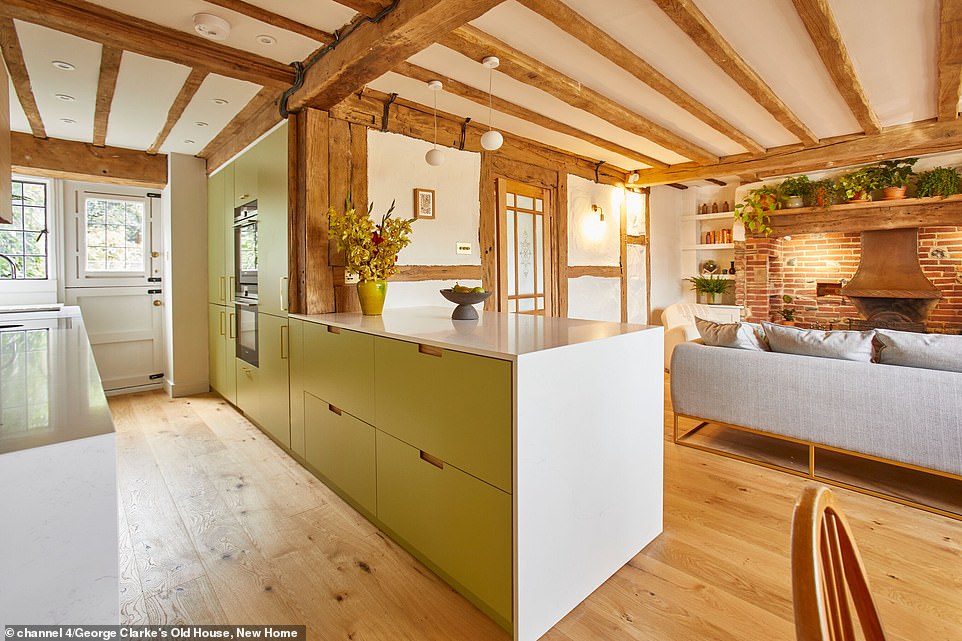 And upstairs, there were  two good sized bedrooms, as well as a nursery for Ruby, and a family bathroom.

Josie said: ‘We lost three babies before Ruby came along, and for me its just a bit of a dream to make a nursey for a baby.

‘And this is so special, fourth time lucky with Ruby. It’s been something that I’ve really wanted for a long time.’

Meanwhile on the third floor, there was a huge fourth and final bedroom, and a bathroom.

Despite the obvious challenges of the property, George seemed impressed by the structure.

He said: ‘It’s like a mini medieval hall isn’t it? Very interesting colour choices. But the light is beautiful. You have actually got the dream house you know.’

Josie added: ‘I’m glad you said that because I am feeling a bit daunted at the moment.’

The couple explained they had a maximum budget of £60,000 and wanted to be in the property in six months.

So George came up with a plan that wouldn’t break the bank and could also work within the existing structure. 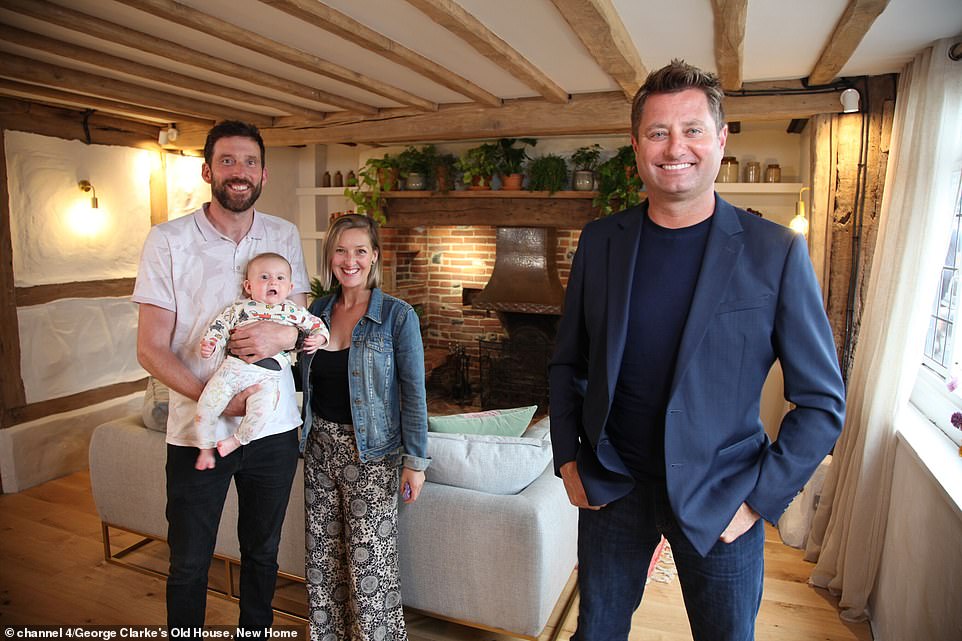 Josie and Duncan lost three children before welcoming daughter Ruby, pictured with George Clarke, and said it is a dream come true to have a family home

He said: ‘You want to open up as much as possible, because it feels quite boxy. You’ve got a few bonkers options.’

George suggested redesigning the top floor to have a walk in wardrobe and create a more dramatic stairway, as well as a luxury en-suite lit by two new sky lights.

Meanwhile he suggested they knock the downstairs kitchen and living space into one, to create a beautiful open-plan family room.

And it wasn’t long before Josie and Duncan began their property, ripping out the bathroom and putting in a new stud wall for the en-suite bathroom.

Five months into the six-month build, and it was all go – the kitchen was being fitted, the plasterers were in and the the tilers were getting started.

But Duncan said they’d have a tough challenge because ‘nothing in the house is at a right angle.’ 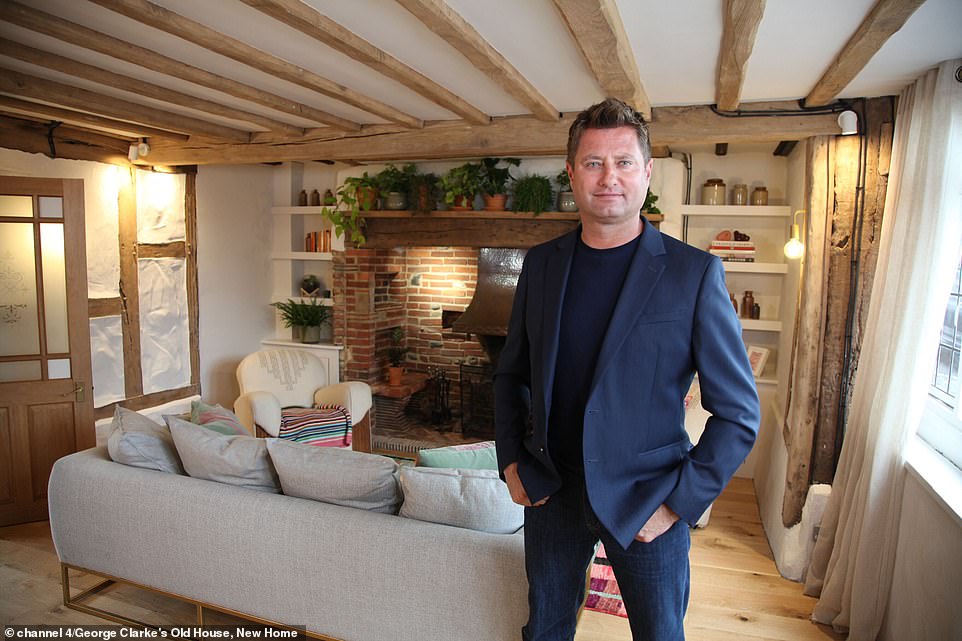 Finally, the couple unveiled their property – the spaces were joined together to create a modern open plan living area which was perfectly zoned for family life, pictured

For the final push, it was all hands on deck. Josie confessed she had been feeling some guilt over how much attention she’d been able to pay her daughter.

She said: ‘It has been really tough and there’s a certain amount of guilty that goes with it. You’ve got to keep thinking, we’re making a really lovely home. It pulls my heartstrings to think, I should be doing other stuff with her but I’m here doing this because it just needs to get done.’

Finally, the couple unveiled their property. The spaces were joined together to create a modern open plan living area which was perfectly zoned for family life.

Josie couldn’t believe the changes to the house, saying: ‘Is this our house? It just looks so cosy and homely.’

Meanwhile upstairs, the nursery had been transformed, symbolising the beginning of a long awaited new chapter for the couple. 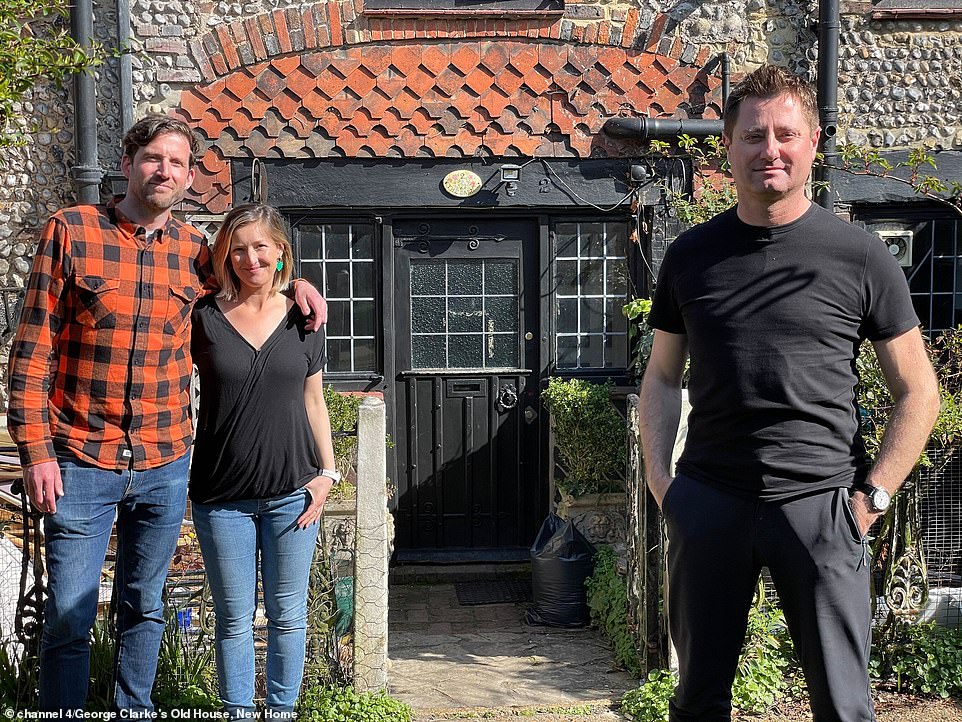 For the final push, it was all hands on deck. Josie confessed she had been feeling some guilt over how much attention she’d been able to pay her daughter

Josie burst into tears, wiping tears from her eyes, saying: ‘I just can’t believe it. It’s so special.’

The top floor always had potential to be a striking master bedroom suite with a generous footprint, vaulted ceiling and exposed beams already in place.

But the transformations the couple had done were incredible – making it a relaxing and luxurious space, complete with a walk in wardrobe and pristine en-suite shower room.

The couple said the latest tally was £90,000 – with Josie adding: ‘We need to remind ourselves, we’ve done a lot more than we thought we could at the outset.’