Premier Daniel Andrews has insisted Victorians can have faith in the state's reporting of COVID-19 deaths, after 53 people who died in aged care homes between July and September were added to Friday's daily death toll.

Victoria recorded 59 new deaths from coronavirus on Friday, bringing to 600 the number of people who have lost their lives to the virus including 505 people living in aged care. 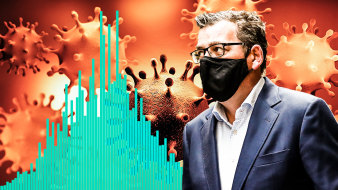 It is the second time this week the daily death toll has been dramatically inflated by the inclusion of people who had died in the weeks prior.

The Morrison government says it first identified discrepancies between its own records of the number of people dying in Victorian aged care homes, and the Andrews government's figures on aged home deaths, in July.

A spokesman for Aged Care Minister Richard Colbeck said the data – and any discrepancies within it – were the responsibility of the Victorian government, as was responsibility for reporting COVID-19 cases and deaths within the state.

"The main reason for the discrepancy in the number of deaths reported by the Commonwealth and the Victorian government is due to the deaths not being reported in the DHHS Public Health Unit information system – the Public Health Event Surveillance System [PHESS]."

He said that until August, Victorian authorities required the verification of a death certificate of anyone suspected to have died from COVID-19, which resulted in delays between aged care homes reporting a death from coronavirus, and that death being officially recorded as a COVID-19 death.

Chief Medical Officer Brendan Murphy wrote to all Victorian residential aged care providers on August 8, asking that they notify both Victorian and Commonwealth authorities of the death of any residents who had tested positive to COVID-19, in an attempt to create a single set of data.

"Death reporting to the Commonwealth is an obligation of those aged care facilities," Professor Sutton said.

"No one is doing the wrong thing here. The notifications of coronavirus to DHHS [the Department of Health and Human Services] in Victoria is an obligation for medical practitioners and laboratories in Victoria, so we have to reconcile those together. We've gone through an audit process to try make that as robust as possible and we want to get it right. "

He flatly rejected suggestions DHHS had taken weeks to get its data in order.

"We have worked with the Commonwealth consistently using the public health surveillance system
as our centrepiece and to take those notified deaths and to reconcile them appropriately before we come to an agreed figure with the Commonwealth. That's been the process all the way through."

Mr Andrews said he would "always prefer that all the data arrived at exactly the right location in as timely a fashion as possible".

"The key point here is that there needs to be, and we are reporting today, a greater alignment of information that is held by private aged care providers, Commonwealth authorities and state authorities and having them all together so that we can update the numbers and be as accurate as
possible," he said.

"That is what we are all working towards. Can I say that there is no quarrel between any of those three parties. We are all trying to be as complete and as accurate as we possibly can."

On Thursday, Prime Minister Scott Morrison incorrectly told question time there had been 10 deaths at BaptCare Wyndham Lodge in Werribee. There had been at least 17 deaths at the time.

A government spokesman said the discrepancy was due to out-of-date figures remaining on the Victorian Aged Care Response Centre's database.

"The Victorian Aged Care Response Centre [VACRC] is working closely with Victoria Department of Health and Human Services and other Victoria agencies to reconcile the data as soon as possible," the spokesman said.

The VACRC, a joint state-Commonwealth body set up to respond to the Victorian aged care outbreak, was last month tasked with centralised reporting on infections and deaths after concerns were raised about discrepancies between state and federal figures.

Chief Nursing and Midwifery Officer Alison McMillan said while giving the federal Health Department COVID-19 update on Thursday that state and Commonwealth authorities were "working extraordinarily hard to improve the accuracy of this data".

"This is a complex issue of identifying people across a system and making sure that there are two numbers of figures to reconcile," Ms McMillan said.

She could not give a timeline for when the discrepancy between state and federal data sets would be resolved.

"I think we're a lot closer to getting complete reconciliation but it is going to take a little bit longer to complete the process … I can't give you a deadline of when that will be completely resolved. We had to go back some significant time," she said.

The "final arbiter" on the cause of death for each person believed to have died from COVID-19 was the coroner, she said, and "that often does take some extended time".