Premier Daniel Andrews says the promise of resurrecting the State Electricity Commission was a killer blow in the election campaign that delivered Labor a third term in office last weekend.

In his first newspaper interview since the poll that has given Labor a comfortable lower house majority and more supportive upper house, Andrews told The Age that the SEC promise went to the heart of voters’ concern about climate change, but also anxiety about power prices and privatised energy. 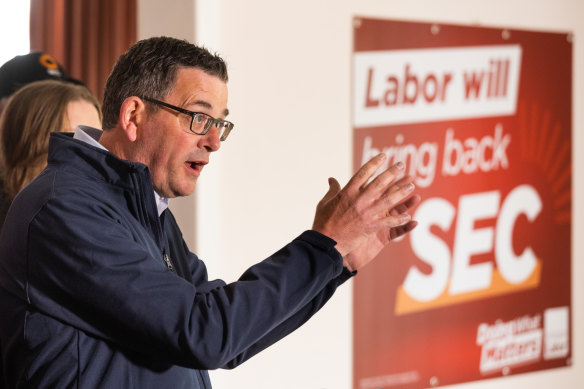 Victorian Premier Daniel Andrews on the campaign trail at Yallourn on Tuesday.Credit:Jason South

“People are sick and tired of not being able to explain to their kids [when they ask] ‘Why it is that we’re not doing anything while the climate boils and the planet gets hotter and hotter and hotter’,” Andrews said.

Andrews said the message “power for people not profit” hit a real chord with Victorians.

The Liberals under Matthew Guy ran a campaign based on cost of living and health but even though some seats fell their way it was not enough to deliver government.

Despite media commentaries about a possible close election and hung parliaments, the Andrews team romped home and has picked up 53 seats, with counting continuing in Preston, Pakenham, and Bass.

ABC election analyst Antony Green called Hastings on the Mornington Peninsula for Labor’s Paul Mercurio on Friday afternoon, after the former actor extended his lead to 51 per cent on a two-party preferred measure. In the neighbouring seat of Mornington, independent Kate Lardner conceded to Liberal candidate Chris Crewther on Friday.

Pakenham is on a knife-edge, with the latest two-party preferred figures from the Victorian Electoral Commission putting the Liberal Party’s David Farrelly and Labor’s Emma Vulin tied on 18,267 votes.

If a seat remains tied after a recount, a VEC spokeswoman said the agency would defer to section 117 of the Electoral Act 2002.

The election manager must declare the election tied, and within 14 days the VEC or a candidate petitions the Court of Disputed Returns. The court could declare one candidate elected, or decide the election is void and order a re-election.

As The Age foreshadowed this week, Shaun Leane has been moved out of cabinet and St Albans MP Natalie Suleyman and Northern Metropolitan region representative Enver Erdogan will be elevated to the frontbench.

The premier said the portfolios for his new cabinet would be announced on Monday.

Labor promised to spend $1 billion to establish the new SEC to eventually deliver 4.5 gigawatts of power and create 59,000 jobs and 6000 apprenticeships, with the head office to be located at Morwell in the Latrobe Valley.

Behind the scenes in government the idea of state re-entering the energy market, more than two decades after Jeff Kennett privatised the SEC, has been talked about for some years.

Andrews said the idea firmed after AGL announced in September it would bring forward the closure date of its Loy Yang A Power Station in the Latrobe Valley by up to 10 years to 2035.

Andrews’ lines during the campaign that the SEC should have never been privatised and that electricity was an essential asset was pulled directly from focus groups. Labor considered rolling out “publicly owned energy” but realised most people did not recognise what that meant, so they eventually switched to describing it as government-owned energy which was splashed across all their campaigns.

Labor campaign insiders who tested the SEC idea in focus groups said it was enthusiastically backed by a wide cross-section of voters – those in the country hoping to see more jobs, others in the outer suburbs struggling with high power prices, and young inner-city voters focused on climate change.

To date the SEC plan is light on detail. One Labor figure close to Andrews who was not able to comment publicly said: “It may or may not be good policy but its f—ing good politics.”

Former Australian Competition and Consumer Commission chair Professor Rod Sims said he did not believe there were any issues with the commission that would raise competition policy concerns because it was being set up as a new entity that would compete with existing players.

He said the new SEC was not like the old SEC, which controlled the generation, distribution and all of the retailing of electricity.

“There’s no issue from a competition point of view,” Sims said. “They’re not seeking to re-nationalise anything. They’re setting up something new, in competition.”

Andrews also stressed the importance of Labor’s $140 million women’s health package in the campaign, noting that he had personally attended crucial expansive meetings with women with whom the policy was developed.

Andrews dismissed the idea that the health initiative was a panic move late in the campaign to shore up the female vote as “complete rubbish”.

“The first of those meetings happened a year ago,” he said.

He acknowledged that anger towards him in the community over lockdowns was a factor in the campaign, although he stressed that the loudest noise was from commentators who wished a greater level of voter hostility toward him “than what was actually true”.

Andrews said most Victorians knew and appreciated that his government had delivered its bold policy promises, pointing to the state’s massive infrastructure rollout.

“This is not about having everybody love you … it’s about respect. And it’s about a sense of ‘can he do the job?’ Well, yeah, he’s done it for eight years.”