Australian airports warn they are haemorrhaging about $320 million a month as they grapple with coronavirus border closures, travel bans and security costs.

Airport officials have told the Morrison government the combined losses have reached $2.2 billion already and are expected to surpass $3.5 billion in total this years. 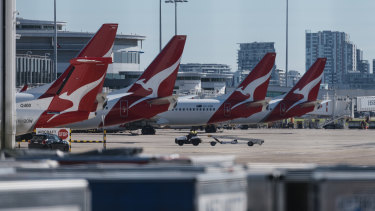 The Australian Airports Association is pressing the government to contribute more to the cost of security for hundreds of grounded planes.Credit:James Brickwood

After years of profits from surging travel and tourism, airports are facing months or years of losses that will put pressure on 8700 employees and another 200,000 jobs the industry says it supports.

In a budget submission that sets out the financial risks, the Australian Airports Association presses the government to contribute more to the cost of security for hundreds of grounded planes.

It proposes a $437 million recovery plan that includes $237 million in immediate relief including an extension of the JobKeeper wage subsidy for regional airport staff, who are currently ineligible. The request also includes $150 million to support security screening costs, $10 million for terminal cleaning and $6.8 million for airfield security.

A separate "recovery" program would require $200 million in federal funds to build new security at airports and pay for infrastructure upgrades, including at regional and mid-size airports.

The aviation industry has welcomed Prime Minister Scott Morrison’s move to increase the international arrivals cap from 4000 to about 6000 a week, with about 500 more travellers each for NSW, Queensland and Western Australia and 100 more for South Australia. Victoria was taking about 1700 a week before its stage four restrictions but the average has fallen to 11 a week, with the state's new cap yet to be confirmed.

But it wants state and territory governments to help smaller airports around the country, with many of them run by local councils and suffering from federal and state decisions to curtail travel.

The industry is also worried Qantas is angling for state subsidies by airing the idea of relocating its Sydney headquarters.

The airport association's chief executive, James Goodwin, said state premiers should "stop inflicting damage" on the community and business and open their borders in circumstances where the health risk was relatively low.

"Unfortunately, self-interest has swallowed national interest, so we need to get state borders down," Mr Culbert told an online forum hosted by Infrastructure Partnerships Australia.

The airport association estimates the industry lost revenue of $1.6 billion over the four months to June and $320 million a month since then, taking the total to about $2.2 billion to the end of August.

The lost revenue to June consisted of $955 million in forgone aviation services, such as landing fees, and another $618 million that normally would have come from rents, parking fees and other non-aeronautical services.