On-street parking is set to be made free in Melbourne's CBD over the Christmas season to attract shoppers, in a move that will cost the city at least $1.6 million in lost revenue.

But the plan has been written off as a "1960s solution" ill-suited to modern Melbourne by planners who helped shape the city's current transport strategy, which discourages motorists driving into the CBD. 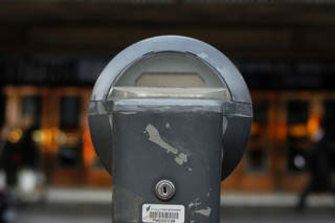 Parking would be free over the Christmas period under a plan supported by the City of Melbourne.

The city council will on Tuesday vote on a proposal from management to offer a parking voucher system across the municipality between December 1 and January 3, allowing cars displaying the voucher to avoid getting a ticket. Parking time limits would still apply.

It is designed to lure shoppers back to the CBD to help restore the battered economy, but is a departure from years of car-averse planning at the City of Melbourne.

Council officers have estimated the plan would cost $1.6 million if there is a 50 per cent take-up of the vouchers.

The council is also talking to commercial off-street parking operators about making their fees cheaper. It will seek at least a 25 per cent reduction to the congestion levy paid to the Victorian government, which would cost the state more than $25 million over 12 months. And it will work with the Department of Transport to encourage greater take-up of public transport and cycling.

Last year the City of Melbourne released its Transport Strategy 2030, which committed the council to cutting the amount of traffic passing through the CBD and repurposing road and parking spaces for pedestrians and cyclists.

Consultants from the Institute for Sensible Transport, which helped shape that strategy, said they were disappointed at the shift to incentivising car use.

"Trying to compete with the likes of Chadstone or Fountain Gate on parking is a race they will never win, and nor should they want to," senior transport analyst Vaughn Allan said. 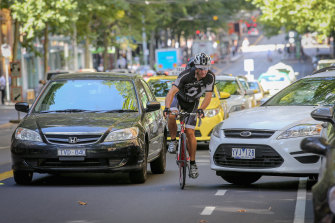 Cars will be encouraged to return to the CBD as part of a push to reinvigorate the city’s economy.Credit:Wayne Taylor

"Making car parking cheaper is a 1960s solution, ill-suited to the aspirations of the City of Melbourne. The COVID-19 recovery is the perfect time to accelerate the shift to a sustainable, liveable Melbourne."

A report prepared for the council on Monday shows traffic is already close to pre-pandemic levels, with arterial traffic volumes across metropolitan Melbourne last week at 90 per cent of those recorded in February.

Pedestrians are returning to the CBD, where foot traffic levels on November 18 were 49 per cent of those recorded in February. With most major offices still near-empty, peak-hour public transport use was at 32 per cent.

The report shows Melburnians have taken to cycling this year. On commuter routes, the number of cyclists on November 9 was 61 per cent of the level at the same time the previous year, but on recreational routes it was 125 per cent.

Elliot Fishman, director of transport innovation at the Institute for Sensible Transport, said it was important for the city to support businesses' recovery.

"But we're surprised that there's that departure from the core principles that were included in the transport strategy, and were surprised in particular that there's a focus on incentivising people to arrive in the city by car, whereas they could have supported businesses by providing things like vouchers for free coffees or discounts on meals, up to the value of what they're going to be wearing in terms of the loss of car parking revenue."

The city has installed outdoor dining "parklets" in 200 car parking spaces across 100 locations. It will also remove another 228 parking spaces and replace them with bicycle lanes.

There are 217,000 private and public parking spaces in the municipality, comprising 193,500 off-street bays and 23,500 metered and un-metered on-street parking spaces.