Scarlett Johansson looked like a vision in silver when she arrived at the 2020 Oscars.

The 35-year-old actress wore a sleek metallic Oscar de la Renta gown with a netted corset and low back that put her tattoos on full display. Johansson has had a lamb tattoo on the right side of her back for a while, but the roses on a vine didn't appear until 2017.

The "Marriage Story" star also has a tattoo of a colorful sunrise on her arm, two circles on her ankle, a bird across her rib cage, a horseshoe with the words "Lucky You," and a second rose tattoo. The Avengers logo is located on the inside of her right arm, and a bracelet around her wrist says "I ❤ NY."

Below is a closer look at all of the outfits Johansson has worn that put her tattoos on full display.

At the 2020 Oscars, Johansson's tattoos peeked through the sheer corset of her dress. 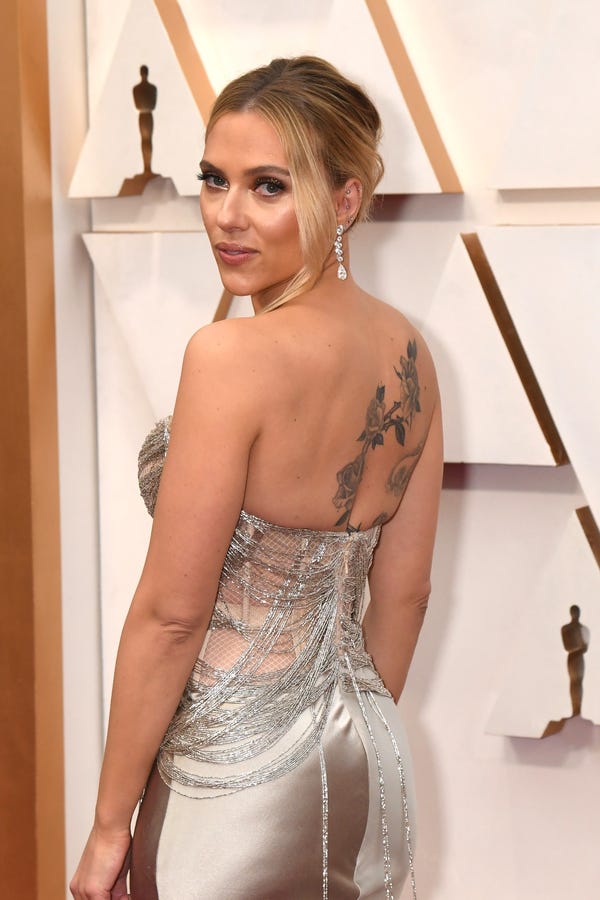 The Oscar de la Renta gown featured a low back so you could see Johansson's rose and lamb tattoos. 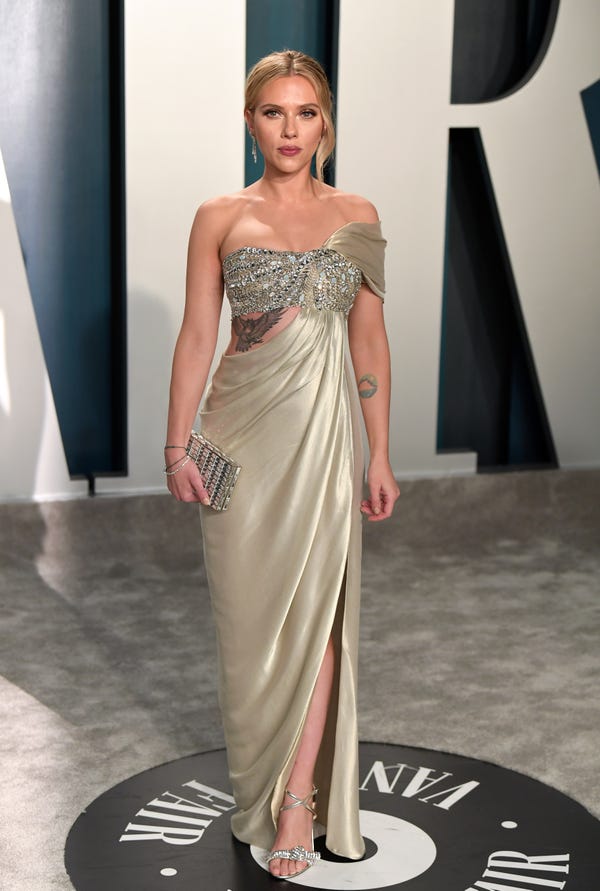 This time around, her dress featured a cutout along one side of her waist that perfectly showed off her rib cage tattoo of a bird. Johansson's sunrise and bracelet tattoos were also on display thanks to the sleeveless design.

Johansson walked the 2020 BAFTAs red carpet in one of her most daring looks to date. 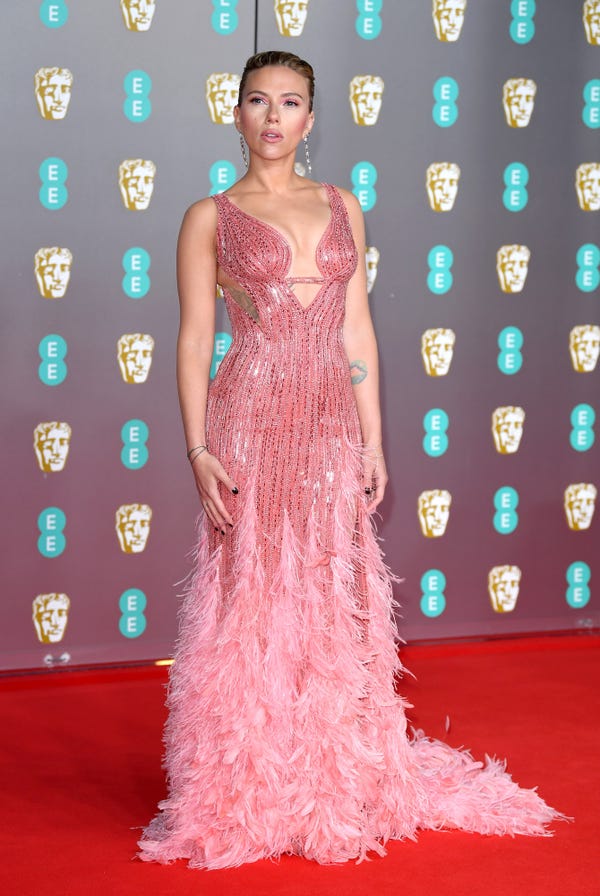 She arrived in a custom-made pink Versace gown with a plunging neckline. Johansson's dress included sharp cutouts across her waist that showed off her rose tattoo on the right side of her rib cage, as well as a bird on the left.

Johansson arrived at the 2020 SAG Awards in a showstopping teal gown. 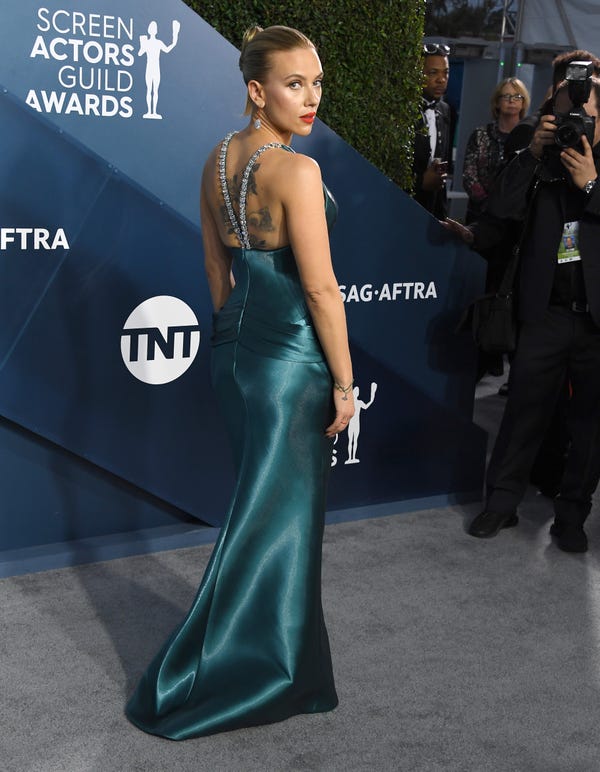 She wore a custom Giorgio Armani gown that featured a low-cut neckline and an open back with crystal embroidery that showed off her back tattoos.

At the 2020 Golden Globes, Johansson turned heads in a red trumpet gown. 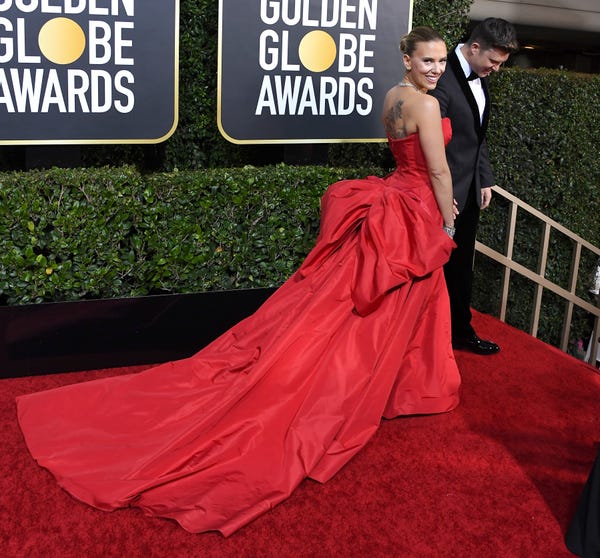 At the 2019 premiere of "Marriage Story," Johansson arrived in a dress straight off the runway. 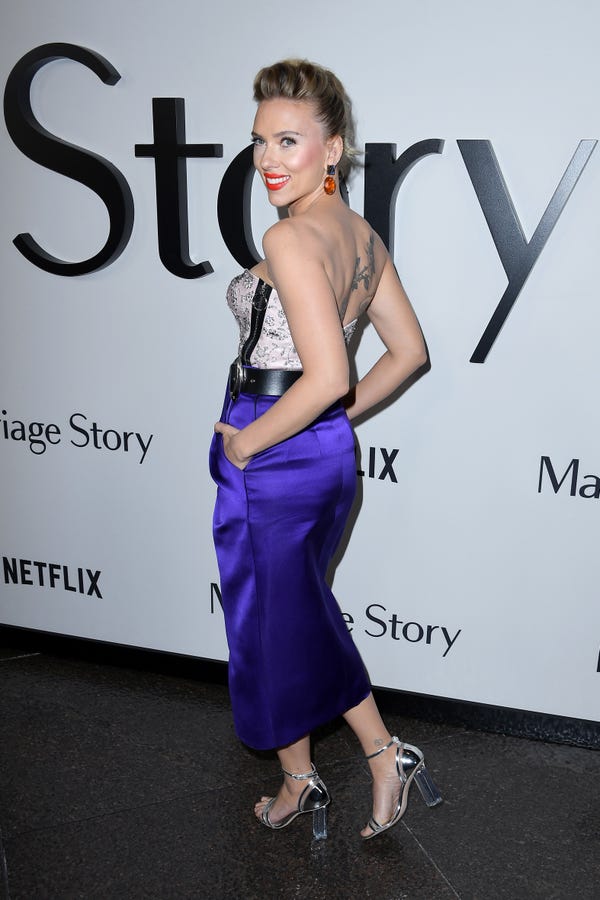 The actress wore a Louis Vuitton gown from the cruise 2020 collection. Thanks to the strapless design, photographers captured Johansson's back tattoos.

Johansson wore a dazzling Celine dress to the 2019 Governors Awards. 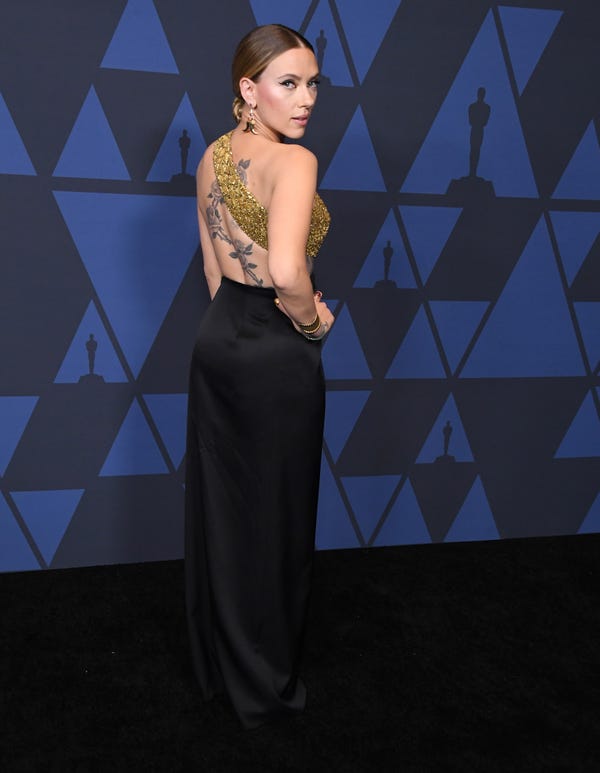 The black and gold fitted design featured a cutout across the waist that showed off Johansson's bird tattoo. An asymmetric strap along the back also lets everyone see her rose tattoo.

At the 2019 premiere of "Jojo Rabbit," Johansson turned to Miu Miu for a sweet matching pink set. 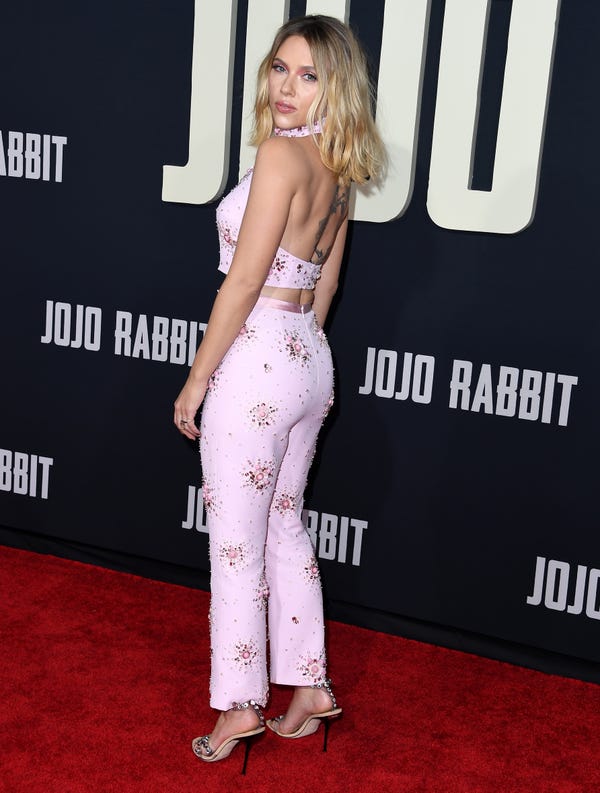 Johansson's outfit featured a halter top with an open back.

Johansson made a statement in sequins at the 2019 New York Film Festival. 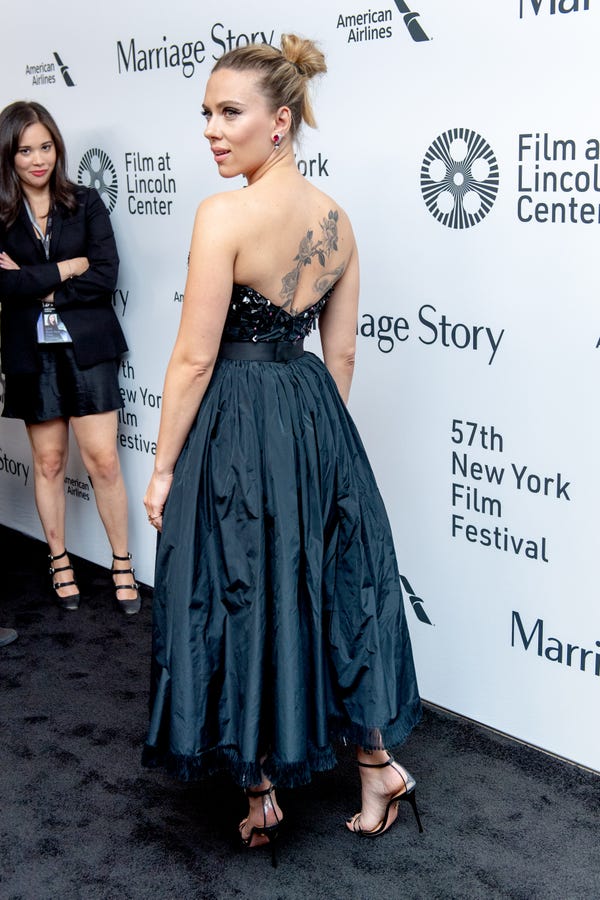 The actress opted for another strapless design in a Christian Dior dress.

The actress went for a sultry look at the 2019 Venice Film Festival. 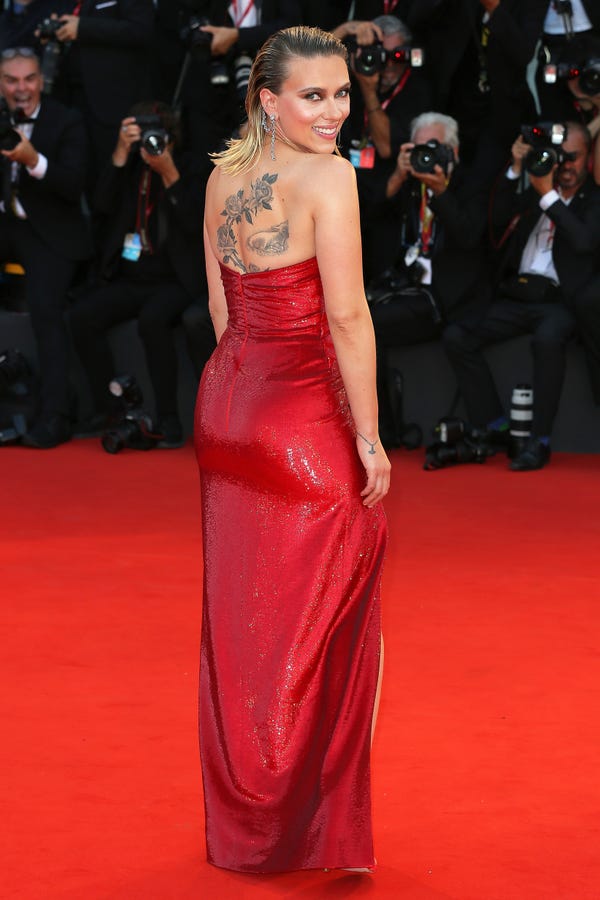 Johansson wore a red sequin Celine gown with a sweetheart neckline. From this angle, you can see her back and wrist tattoos perfectly.

Johansson showed off some of her more hidden tattoos during a Marvel Studios panel at Comic-Con. 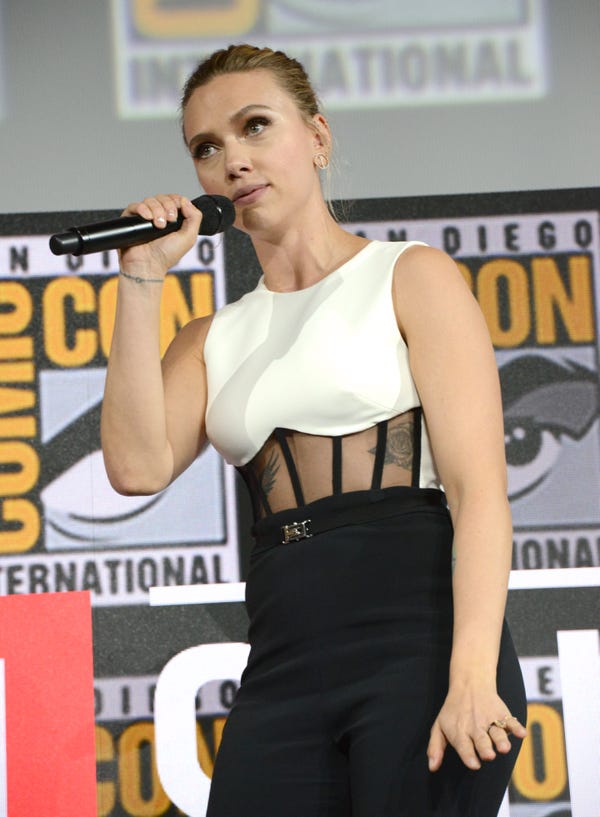 She wore a David Koma jumpsuit with a corset that allowed fans to see the bird and rose tattoos on her rib cage.

Johansson arrived at the 2019 premiere of "Avengers: Endgame" wearing a daring silver dress. 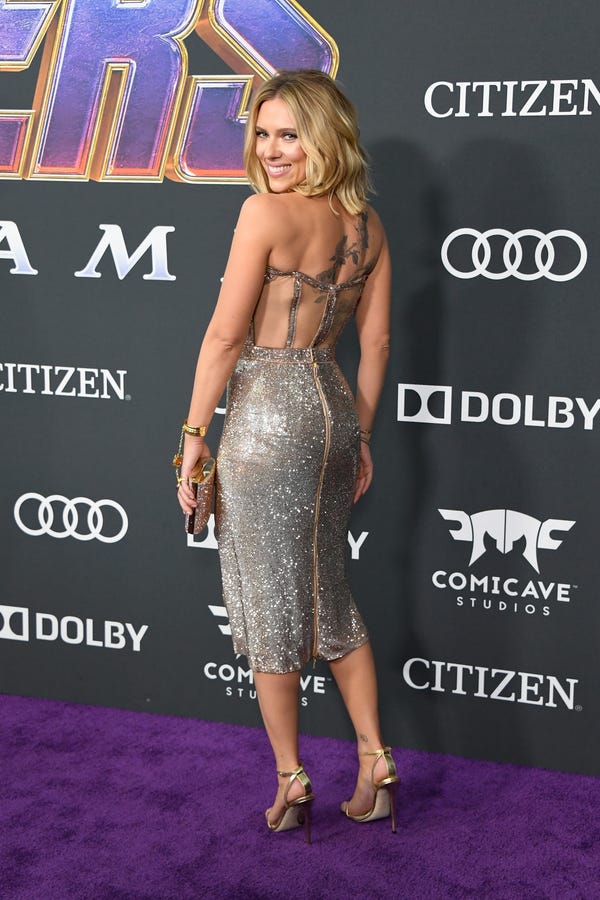 She wore a sparkly Versace dress with a sheer back.

Johansson had a real fairy-tale moment in this pink gown at the American Museum of Natural History's 2018 gala. 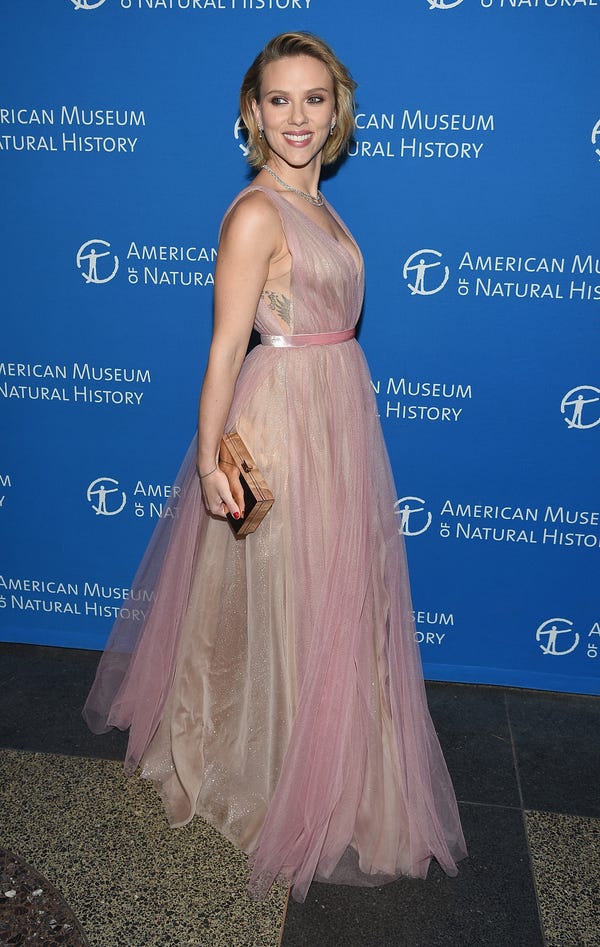 Johansson's bird tattoo peeked through the sheer side paneling of her sequined J.Mendel gown.

Johansson put part of her back tattoo on display at the 2018 Emmys. 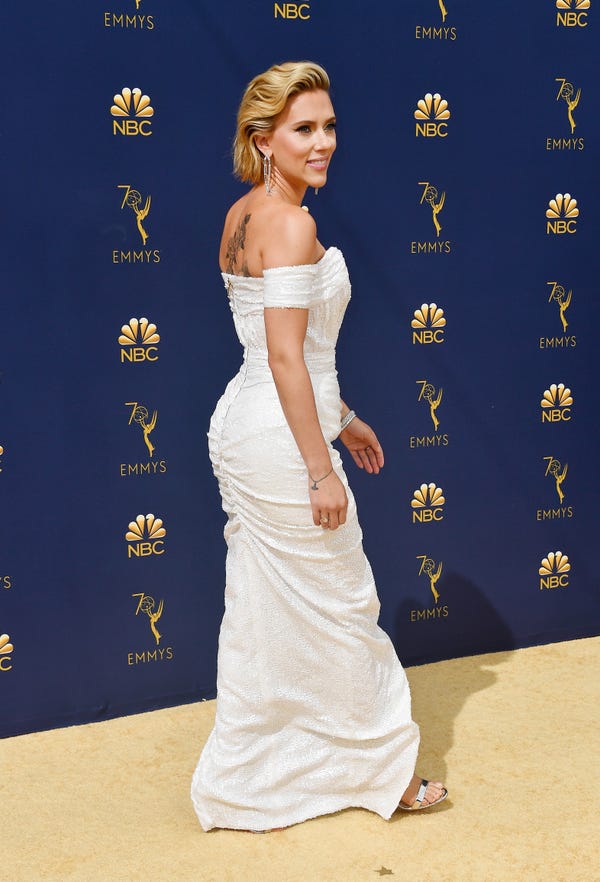 Johansson wore a white Balmain dress to support her fiancé Colin Jost, who hosted the awards show in 2018.

At the 2018 Met Gala, Johansson wore a dress designed with flowers that matched her back tattoo. 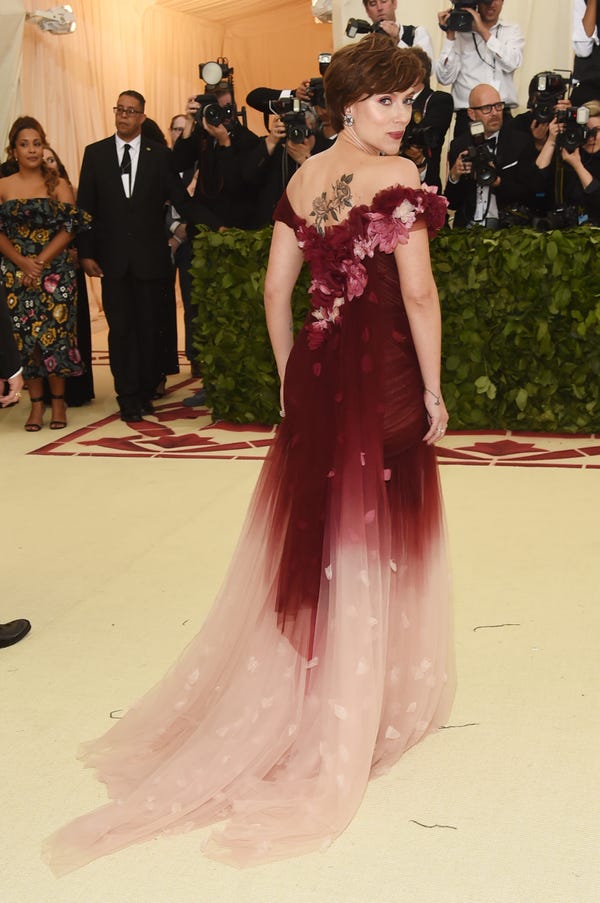 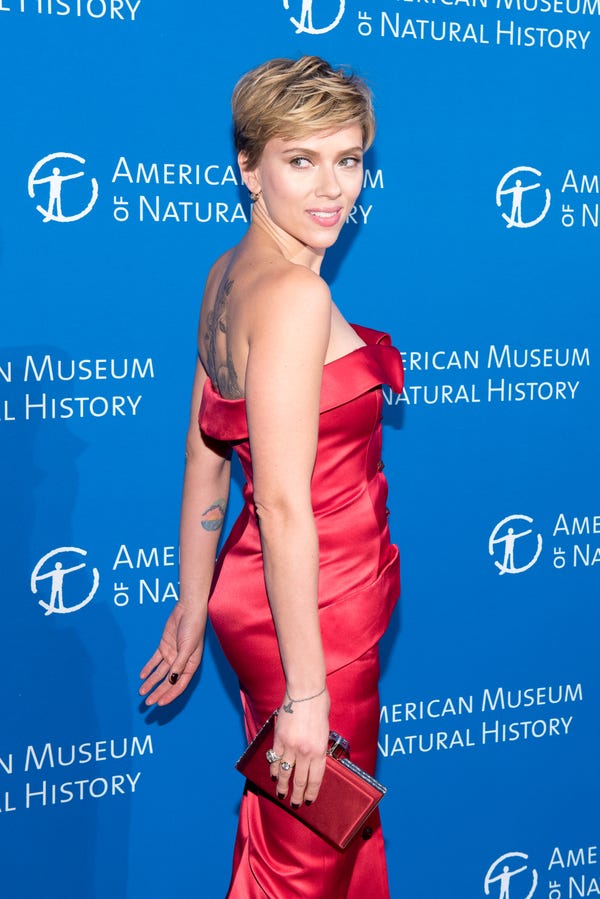 The strapless design didn't distract from her rose, colorful sunrise, and "I ❤ NY" bracelet tattoos.

At the 2018 premiere of "Avengers: Infinity War," Johansson wore a strapless metallic gown. 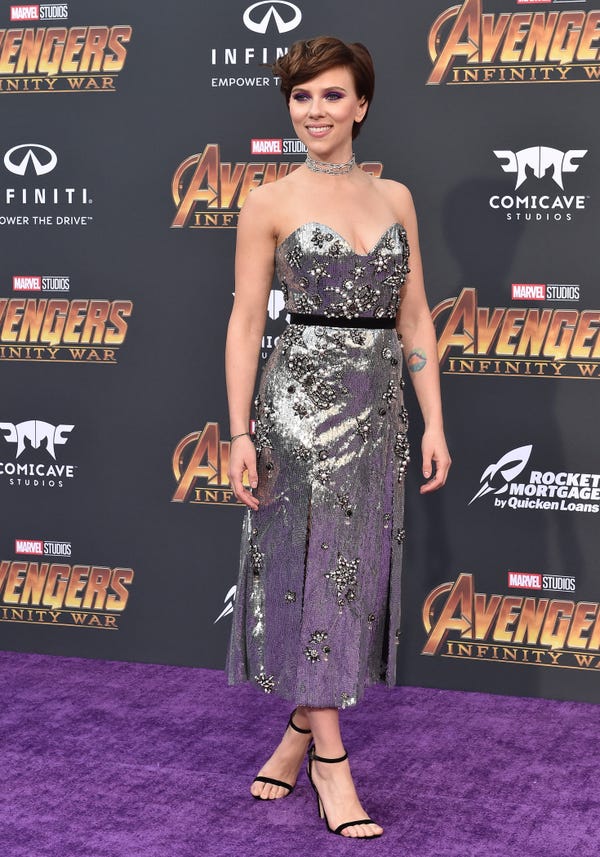 The actress wore a strapless Erdem dress with a low back.

Johansson only had a lamb tattoo on her back at he 2017 premiere of "Rough Night." 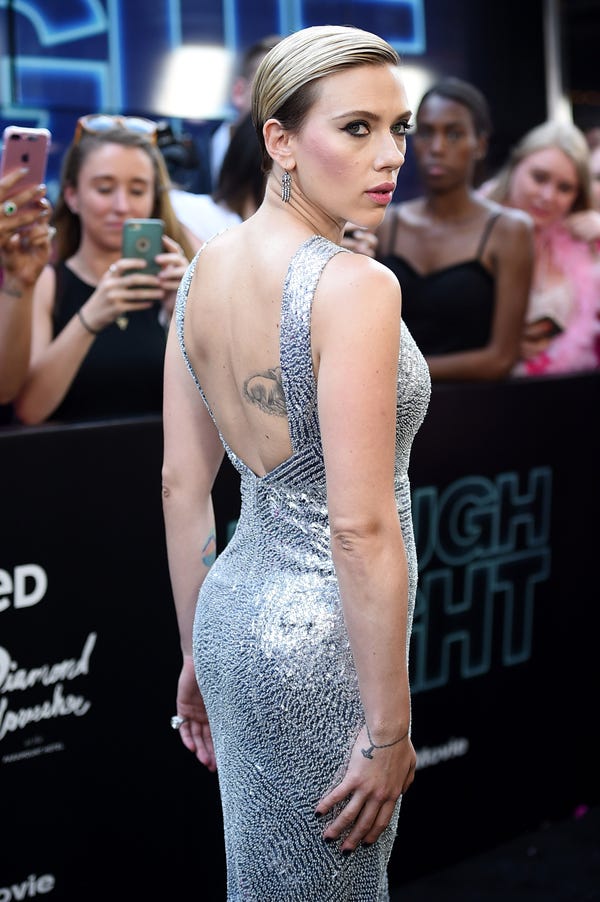 Based on this picture of Johansson, we know that she got her now-famous back tattoo between June 2017 and August 2017, when she was spotted with it on the set of "Avengers."