False alarm! Kristen Bell rushed to the hospital with her and Dax Shepard’s 4-year-old daughter, Delta.

“Right before this photo was taken my youngest daughter shoved a jewel up her nose up to her brain and we jumped in the car headed to the emergency room,” the actress, 38, wrote on her Instagram Story on Tuesday, June 18. “On the way she snorted it out and we re-routed and went to @nbcthegoodplace #FYC panel instead.”

In the following photos, the Veronica Mars star paired a white suit with a nude top and matching pumps, her hair pulled back in a bun. 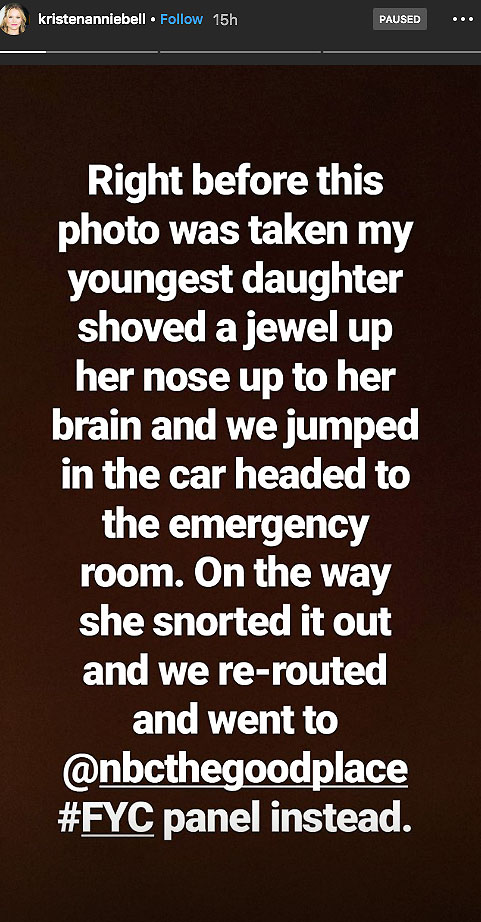 The Good Place star and the Parenthood alum, 44, who tied the knot in 2013, also share daughter Lincoln, 6.

When it comes to keeping their marriage strong with two little ones at home, Shepard told Parade magazine in March that he and his wife have only had “nine [date nights] in the last six years.” Instead of going out, he admitted, “We play board games and the kids destroy the house, and that’s just a fun Sunday. We’re boring.”

In December 2018, the actor opened up to Us Weekly exclusively about how he and the Zimzum of Love author intentionally resolve their issues in front of Delta and Lincoln.

“You know, generally, kids see their parents get in a fight and then parents sort it out in a bedroom and then later they’re fine, so the kid never learns, how do you de-escalate? How do you apologize?” Shepard told Us at the time. “So we try, as often as possible, to do that in front of them. If we fought in front of them, we want to also make up in front of them.”