We’ve all been in a situation in which we have to slightly edit the truth to spare the feelings of our loved ones, and that’s exactly what this TikTok mom did for her husband. She explains in her viral video, “Most of you already know this, but my husband found this bear suit when I was pregnant with our little girl and he became obsessed with it and dresses her in it almost every single day.”

After showing several clips of her husband initially buying the outfit and of her daughter in the bear suit, she explains, “The only problem is that she grows out of it, and I haven’t had the heart to tell him that yet, so instead I have been secretly replacing them every month since she was a month old.”

BEAR SUIT UPDATE FOR YOU 🫶🏼

Stringing together clips of her opening packages with the newest bear suit inside, the mom explains, “Whenever this happens I have to just be like, ‘Oh it’s dirty!’ He gets really sad and he’s like, ‘Aw, I’m so sad it’s dirty.’ And then I replace it, and then she’s in the bear suit again in the right size.”

Then she says in disbelief, “Except, guys, then I found out that he knows the secret!” Her husband says with a laugh to the camera, while of course holding their daughter in her bear suit, “It’s like when you have a fish and it dies and your parents replace it before you can see it — that’s what this bear suit is like.”

Users expressed their own obsession in the comments, with one writing, “Buy him a matching one!!” Another person hilariously commented, “She’s has to walk across the stage at graduation in a bear suit. I don’t make the rules.” Someone else piggybacked off of the previous person, writing, “It’s her wedding day. Dad is waiting to walk her down the aisle. She appears in a bear suit. They embrace. It’s the happiest day of their lives.”

Other users gave the mom suggestions of things to do with the outfits once her daughter grows out of them, with one person writing, “At her first birthday hang them all in order as decoration! like a clothesline, but cuter! That’s what we did with my son’s special clothes.” Someone else suggested, “you should buy a Build-a-Bear and put the OG bear suit on it.” 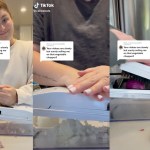 The best part? We found where you can get a bear suit of your own for your baby cub at home. The devil works hard, but the baby-crazy internet collective works harder.

We’ve got some great suggestions for toys at Costco that your kids will love.