Shay Mitchell really knows how to put what all parents are thinking into one, hilarious video, and her latest vid may be her most relatable one yet. On Nov 22, the Pretty Little Liars star uploaded a hilarious TikTok video of herself and her eldest daughter (whose face was away from the camera) to her Instagram with the caption saying, “Truly.”

In the video, we see a bare-faced Mitchell holding onto Atlas while she’s on speaker phone with her mother, mouthing the words to the song, going, “Whatch doing/ where you at/ oh you got plans/ don’t say that.” Now what makes this so funny is that she captioned the TikTok saying, “Calling my mom because I need a break from her grandchildren.”

Honestly, what a mood; we’ve all been there.

In a recent interview with Byrdie, Mitchell opened up about how she balances self-care and motherhood. “I am a firm believer that everyone needs to try and take at least ten minutes for themselves daily to do something that makes you feel whole. I always try to organize my day so I have time to do something personal, be it spending time with family or friends, taking Atlas somewhere, or working out, which has become my personal version of therapy,” she said. “I have also learned the value of saying no to things when I need to disconnect.” 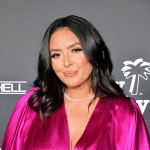