There’s been a lot of change in the Johnson-East household over the course of the last few weeks, as Shawn Johnson East and her husband, Andrew East, officially became a family of four. The couple welcomed son Jett James East on July 19, and shared via social media that they are finally settling in back at home. Along with baby Jett, the couple also shares 21-month-old daughter Drew Hazel, and we finally got a peak at the entire family of four. 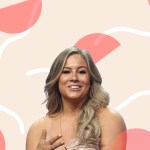 Exclusive: Shawn Johnson East’s First Few Weeks With Baby No. 2 Are All About Couch Cuddles & Binging the Olympics

In a new photo that the former Olympian shared to Instagram, Johnson East, her husband, and their two little ones posed together for one of the most precious portraits captured by photographer Gabrielle Renee Hopkins. The couple looked down at their children with so much love, and the photo also captured a curious Drew eyeing up her baby brother. Jett, meanwhile, stared up at his adoring parents. Just as precious as the photo was the caption Johnson East included.

“How do we have TWO kids (I mean technically three with our fur child),” Johnson East wrote, referencing the couple’s dog. She also called the moment “so surreal but so magical.” It really has been quite a transition for Johnson East and her husband over the last few weeks as they acclimate to their new normal. Fortunately, the former gymnast assured SheKnows during our exclusive interview that “things are going really great.”

“Obviously, life is a little more chaotic, but we’re in heaven as a family of four. We’re taking this time to be with each other and wouldn’t have it any other way. It’s hard to imagine life any other way!” It’s been so wonderful to go on this journey with Johnson East and her family, and we cannot wait to follow along with them as they embark on this next chapter.