Before even welcoming your baby, all of the preparation that goes into getting ready for a new arrival is pretty daunting. There’s the stress of putting together the nursery, going over the delivery plan, making sure everything is in its place — and we haven’t even mentioned the stress of having to name the newest member of your family! Fortunately, second-time parents Shawn Johnson East and Andrew East disclosed some of their baby-prep prior to the birth of their son, Jett James East, and even revealed the name they were considering prior to their son’s arrival. 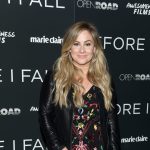 In a vlog posted to the couple’s official YouTube account, the former Olympian and her husband gave their fans a tour of their baby boy’s nursery. The colors of the room were a beautiful worldly gray, and featured one particular furry creature in the artwork and decor. Toward the end of the 10-minute long clip, which you can watch below, Johnson East revealed that elements of the room actually inspired one of the baby name choices the couple was cooking up!

“We don’t know his name now, but one name that we’re thinking about is Bear,” the former gymnast revealed. As fans know now, by the time the couple’s baby boy arrived they decided on the name Jett James East, which actually holds significant meaning for both parents. The couple chose the name as a tribute to Johnson East’s great great great grandmother and her husband’s brother, they revealed in a July 31 Instagram post.

Almost one month after welcoming their baby boy, Johnson East and her husband have been adjusting to life as a family of four. (The couple also shares daughter Drew Hazel East, who will turn 2 years old this October.) It’s been such a journey for the young couple, who have been so forthcoming about the different aspects of parenthood and welcoming their kids. We know their journey is only just beginning, and we cannot wait to see what’s in store for the Johnson East family!