“Just one of those mornings,” the gold medalist captioned a photo of her son Jett whom she welcomed in July with husband Andrew East, on Instagram Stories. “Mom guilt caused by…Drew wouldn’t eat, wanted held because I was nursing brother, didn’t like her outfit, wanted to play in mommy’s closet when we needed to leave…All of the things and my patience was very thin.” The Easts also share daughter Drew Hazel, who is almost 2. 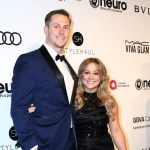 Shawn Johnson East Says She 'Might Be Done Having Babies'

She added, “I had a meltdown this morning. Mom guilt, wife guilt (when mom guilt hits… I become hard to be around so I become edgy with the hubs)…just venting because I’m reading all of these ‘you make it look easy’ messages which are so sweet but just know, like everyone, hard days happen. Momming is hard.”

East’s confession shines a light on “mom guilt,” the uneasy feeling that mothers are never doing enough between work, caring for the home and their children. And the COVID-19 pandemic has placed additional stress on parents, particularly mothers, according to research from the University of Notre Dame. “Put simply, moms felt guilty whatever they were doing; dads did not,” noted study author Abigail Ocobock. “In the rare cases when dads took on most of the parenting and schooling labor (typically because they had more flexible or lighter work demands), moms felt very guilty and indebted to them. More often, though, moms felt guilty even though they were already doing most of the parenting and schooling labor; it was never enough…”

East has been candid about her stress since welcoming Jett. “Obviously, life is a little more chaotic, but we’re in heaven as a family of four,” the former gymnast told SheKnows in July. “We’re taking this time to be with each other and wouldn’t have it any other way. It’s hard to imagine life any other way!”

The athlete also shared her struggles with breastfeeding, “There’s always one feed a day where he seems super hungry and gives all the cues but screams bloody murder when I try to feed him. It makes me so sad,” she wrote on Instagram last month. “When does breastfeeding get easier. It’s HARD!”

We feel you, mom!