Spending time with mommy is always fun, but going on a vacation together? Pure bliss! Shawn Johnson recently took her 2-year-old daughter drew on a mommy-daughter trip to L.A., and the resulting video is so freaking adorable.

The Instagram reel is a short clip of Drew and Johnson’s adventures, starting with the toddler sitting at a restaurant and her mom saying, “Raise your hand if you had fun in L.A.”

Drew responds by opening her mouth wife, showing off her half-eaten food as she grins. “I had fun in L.A.!” she responds.

The duo were in California to record a commercial for Nickelodeon’s Baby Shark’s Big Show! She got her makeup done by professional makeup artists and even wore a cute Baby Shark t-shirt. At the end of the video she twirls in matching pink floral dresses with an American Girl doll, and it is so precious!

Johnson also posted a link to the video on YouTube, where she shared that her 1-year-old son Jett stayed home with his dad, Andrew East, while she took Drew to film her commercial. 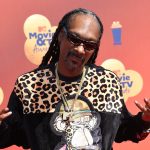 “She was so excited and she had the best time,” Johnson gushed in the video.

Highlights include a trip to the American Girl doll store, where Drew got to adopt a doll — and pick out those cute matching dresses! — going to Starbucks to get a warm milk (which she calls a “Bubba”), and getting her hair and makeup done for the shoot.

“The cutest moment of the entire shoot was at the very end. They wanted to get this shot that looked like Drew was getting tucked into bed,” Johnson said, explaining that she still sleeps in a crib at home but they had a twin bed setup. “She goes, ‘Mama, we’re not going night night.’ And I was like, ‘No baby. We’re going to play pretend.’”

“She thought it was so funny, she tucked herself in, gave a yawn, and laid down in the bed with her eyes closed,” she continued. “I was like, who is this kid?”

Drew was so concerned that she actually had to go to bed, but as soon as her mom explained they were pretending, she got fully into her role. She is so adorable!

These celeb parents know how to throw an epic birthday bash!