If we thought Prince Harry was a good dad before this weekend, we’re even more in awe of him after he and wife Meghan Markle sat down with Oprah. The guy is clearly over the moon about his growing family, including a baby girl on the way. He also showed us just how far he will go to protect his wife and children, even if what he’s protecting them from is his own extended family. 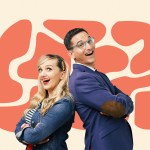 Now that we know some of what was going on behind the scenes, we can see those few photo ops Harry and Meghan had with Archie in his first year weren’t just the happy moments we originally thought. So as we look back at Harry’s quotes about his son and fatherhood, we’re feeling just a bit melancholy. Still we can enjoy one of the few delightful moments of the Oprah interview — the black-and-white home movie Harry shot of Archie and his mom on the beach, accompanied by Harry’s pride in his son’s vocabulary.

The first years of fatherhood, whether you’re Prince Harry or Harry from Hoboken, are exciting, beautiful, emotional, and challenging, to say the least. And while new parents Harry and Meghan Markle have been trying very hard to maintain some semblance of privacy through it all, they have also given us a peek into the ways in which raising Archie is just like raising any other baby.

And then there are the ways in which being a duke and a father must be completely different. Most dads we know didn’t have to explain why they had a private christening, or why they fired their night nurse, and they didn’t have to slip off to Rome for a charity polo match when their babies were just three weeks old, the way Prince Harry did. Most can move to a new country without it being an international scandal. And also most don’t get to buy a multimillion dollar mansion in Santa Barbara when they do so.

As we look forward to the arrival of Baby Girl Sussex this summer, under much different circumstances than her brother’s arrival, let’s back at some of Harry’s best dad moments, and dad quotes, since Archie was born.