Katy Perry, who is expecting a baby girl with Orlando Bloom, shared a photo of herself taking a snooze in a rocking chair while shopping for baby supplies. 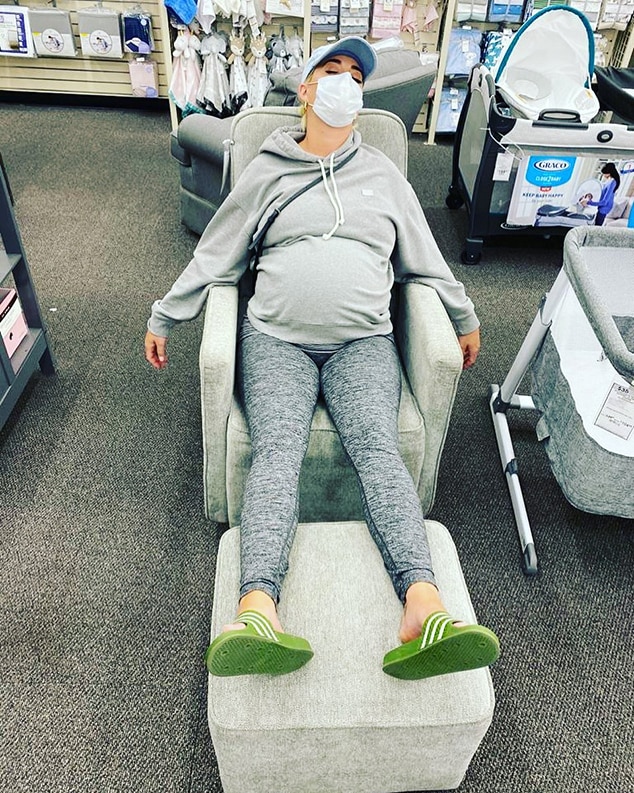 The 35-year-old singer took to Instagram Thursday, Aug. 7, to share a photo of herself shopping for baby supplies. The snapshot showed the 13-time Grammy nominee, who is expecting her first child with Orlando Bloom, taking a snooze in a rocking chair as baby blankets and playpens surrounded her.

Instead of revealing where she was shopping, Perry tagged the location as "I've had it." The pop star then jokingly captioned the photo, "Poopedstar."

Of course, her fiancé offered some words of support. "I love you," the 43-year-old actor wrote in the comments section.

Perry announced her pregnancy at the end of her "Never Worn White" music video in March. She then revealed in April that she and the Pirates of the Caribbean star are planning on welcoming a baby girl.

Perry has kept her fans updated throughout her pregnancy journey, too. From posting photos of her baby bump to revealing her cravings, the artist has shared several aspects of this new chapter with her followers.

However, it looks like fans will just have to wait until the big day to find out the child's name.

"We have yet to decide specifically on her name because, I think, we've got options and she'll tell us," Perry said during an interview with Mix 104.1's Karson & Kennedy earlier this summer, later adding. "I'll look at her and go, ‘Oh yeah yeah, you are her. You are that.'"

In addition to getting ready to welcome her bundle of joy, Perry is preparing to release her sixth studio album Smile. Fans can listen to it starting Aug. 28.

The Bachelorette's Becca Kufrin and Garrett Yrigoyen Break Up