The best antidote to a cold winter? A newborn arriving during the holiday season, of course! If you’re expecting a baby between December 22 and January 19, you’ve got a Capricorn on the way — and a perfect name is a must.

Inspiration for Capricorn baby names is plentiful. The tenth sign of the zodiac wheel, ruled by serious Saturn, Capricorn is represented by the goat — or the sea goat, a mythical creature with a goat’s head and a fish tail. A cardinal sign of leadership as well as an earth sign, Capricorns prefer to forge their own paths — while remaining firmly grounded in life’s realities.

What can you expect from your Cappy newborn? Capricorn babies are a beautiful blend of stubbornness and smarts. You’ll be amazed by the determination your Capricorn child shows at an early age.  Don’t be surprised if you have a bit of a control freak on your hands. Think of goats butting heads (and horns) and you’ll get the idea. But that fish tail signifies a child who also runs deep, with undercurrents of strong spirituality.

We spoke with our favorite baby-name guru over at Nameberry.com, Pamela Redmond Satran, about these magical, sometimes solemn, little ones. Redmond Satran had this to say:

“With Jupiter moving into Capricorn for the next year, any child born under the sign of Capricorn will have a powerful double influence of the sign from both the sun and Jupiter. Capricorn is the first full sign in Winter, so any wintry or holiday names are particularly appropriate: Winter, Holiday, Christmas, Eve, Snow, Lumi (“snow” in Finnish), Frost, January, and Neve.”

Redmond Satran continued, “Silver is the Capricorn metal, so Silver itself is a good choice, along with Eirian (“silver” in Welsh), or Argento/Argenta. The Capricorn animal is the goat, so some goat-related names are Giles for boys or Capella for girls.” Nameberry has a delightful array of Capricorn names, so be sure to check them out here.

We’ve also dug deep to come up with a terrific list of Capricorn baby names we love. So take a look — you might just find the perfect name for your wee goat right here. (And who knows? You might also like our Scorpio- and Sagittarius-inspired names, too. Or our top names of 2019 list!)

Did you know Saturn has 83 moons? And some of their names would definitely make fab — and bold — choices for your Capricorn: Helene, Janus, Althea, Titan, Atlas, Kari, Calypso, Daphnis, Dione, Pandora, Phoebe, Ymir, and Rhea. 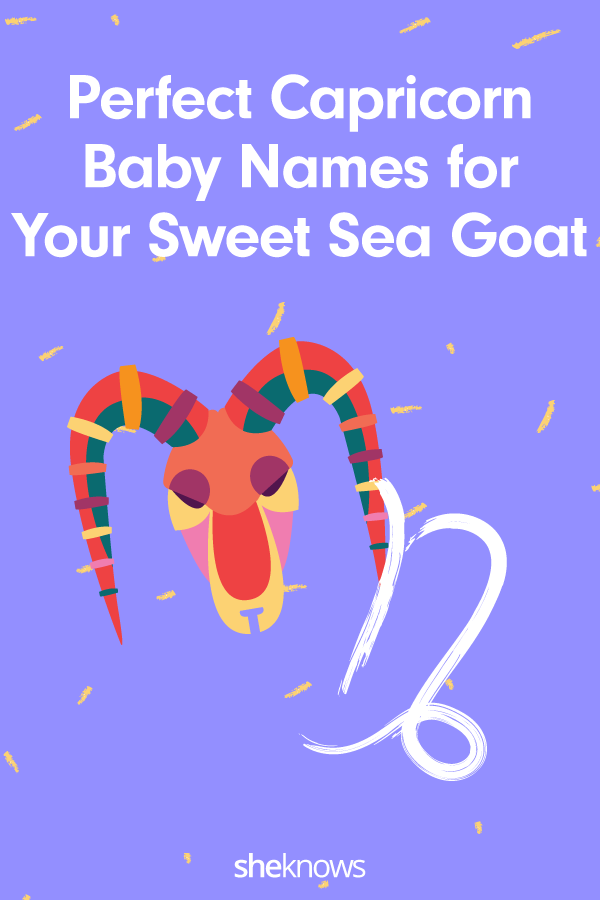