Enough is enough, Kylie Jenner. Since welcoming her baby boy with Travis Scott back in November, we’ve been on a roller coaster about his name. So much so, that fans are grasping at straws trying to guess his name … and are now speculating that the baby is called “home.”

First, he was named Wolf, which, admittedly, is a really cool name. Then, he became the baby-formerly-known-as-Wolf because Jenner said the moniker “didn’t feel like it was him.” OK, fair. It’s hard to name a baby! But we are tired of the teasing. From showing glimpses of his toes to teasing that they have picked a name (not an animal this time!) but are “waiting” to change it, fans are getting anxious.

The Kardashians star shared a series of photos on Instagram yesterday, captioning it simply, “home 🦋🦋.” She teased glimpses (albeit very cute glimpses!) of her 8-month-old son. In one picture, Jenner was dressed in a bikini sitting on a lawn chair. Baby boy was in her lap on the chair in front of her, expertly hidden by her thigh. You could only see one leg with adorable toes peeking out the side.

The next phone was a colorful, handmade sign that said, “Welcome Home.” In the next, baby boy was wearing brown sneakers with red laces, matching with Jenner and Scott’s 4-year-old daughter Stormi.

People were sharing their FEELINGS in the comments, including their guess that his name is “home” based on her caption and the sign.

“U named him HOME,” one person wrote, and another said, “Her baby’s name is homeeee😍.” 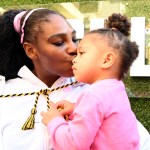 “Just show the baby . It’s not that serious y’all act like you guys are royal,” someone else wrote, although the Royal family do actually reveal their baby’s names once they’re born.

“Thunder looks cute,” another jokingly called the baby, which would fit with the vibe of Stormi’s name.

“Show us Snowy, we wanna see him!” someone else wrote, referring to the name Khloe Kardashian’s daughter True called her baby brother on an episode of The Kardashians, which had fans believing that was the name of Kylie’s baby.

In an episode of The Kardashians last month, the Kylie Cosmetics founder said, “We thought it was going to come to us when we saw him and it didn’t. Then, we had to sign the birth certificate or else they register him without a name or Social Security number, so I felt the pressure to choose a name.”

Despite the fan pressure, Kylie Jenner is going to reveal her son’s name and face on her own time, when she’s ready. (And for the record, I highly doubt his name is actually “Home.”) In the meantime, entertain yourself by reading up on everyone’s wild theories in the comment section of Kylie’s Instagram — you won’t regret it!