After losing their 13-year-old daughter Molly suddenly to an undiagnosed brain tumor in 2016, parents Barbara Higgins and Kenny Banzhoff were devastated. The Concord, New Hampshire, couple had to find a way through their grief, and for Higgins, the thought of getting pregnant again consumed her. But, she was already in her 50s. 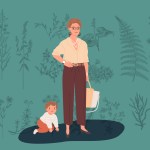 “I started having these dreams that I wanted to have a child — and I thought, ‘OK Barb, that’s a little crazy,’” Higgins shared with NBC Boston. Banzhoff was supportive, though, and soon the couple was looking for in vitro fertilization clinics in Boston that would treat a woman in her 50s. They found one.

“I do a lot of weight training and all that crazy Crossfit stuff that you hear about,” said Higgins, who is dedicated to fitness, and lifted weights until the day she went into labor.

While Higgins and Banzhoff know some people will criticize their decision to have a baby at a later stage in life, they don’t agree. As parents who have lost a child, they know tomorrow is never promised.

“Nobody can give birth to a baby and know with a certainty that they will be alive to see that baby grow up,” Higgins said to NBC. “I don’t know how I will be in 10 years… And why should Jack not get to be alive because I’m old?”

Anyone over age 35 having a baby is considered a “geriatric pregnancy” or being at “advanced maternal age,” so if mom is over age 50, that’s even more concerning for some. Births by women ages 50 to 54 rose by more than 165 percent from the year 2000 (255 births) to 2013 (677 births), according to the Centers for Disease Control and Prevention. (More recent data for this age group is not available because in most years births for women over 50 are included in the 45-49 age group statistics.) In 2013, an average of 13 children were born every week to mothers 50 and older, most of whom used in vitro fertilization, according to an AARP article.

Critics of 50-ish moms fear parents might not “possess the requisite stamina” for parenting little ones or the life longevity to be present during their child’s adult years, Bonnie Steinbock, a bioethicist and professor emeritus at the University at Albany in New York, told the AARP. “They wonder how she will handle a recalcitrant toddler in the terrible twos,” Steinbock said. “Will she be able to relate? Will the child feel embarrassed because the parents look like everyone else’s grandparents?”

Critics also worry about the health of the mother and baby in these situations, and there is an increased risk for gestational hypertension, diabetes, and preeclampsia in geriatric pregnancies. Stillbirth, preterm delivery, growth restriction and multiple births, sometimes a consequence of IVF treatments, also are potential complications.

In 2012, Mark Sauer, MD, a pioneer since 1986 in using IVF with older women and vice chair of the Department of Obstetrics and Gynecology at Columbia University Medical Center in New York, published a study that revealed the health of women 50 and older who gave birth using donated eggs was as good as for younger recipients — if they had been well-screened with medical tests by fertility specialists and cared for during and after delivery.

“I would say that, of the [women] we see in their 50s, it is probably less than 10 percent that we deem too high a risk to treat” for fertility, Dr. Sauer told AARP. “The most common reasons are high blood pressure and fibroid tumors in the uterus.”

Read about how these celebrity parents used surrogates to expand their families.