The 36-year-old daughter of Meryl Streep revealed her pregnancy on Wednesday at W Magazine’s 50th-anniversary party in New York City. She looked stunningly chic in a monochromatic red ensemble consisting of a ribbed sweater dress, a fashionably oversized coat, and sparkling, strappy heels. Her baby bump was her best accessory, which was on full display in her figure-hugging dress.

Ronson, 46, looked every part of the supportive husband and doting dad-to-be, complimenting Gummer’s look with his own 1970s-style beige suit and pale blush turtleneck. He finished his fashion-forward outfit with a snazzy pair of chestnut brown dress shoes.

Gummer and Ronson married in August 2021 after a year of dating. Their wedding marked a second marriage for each of them, but according to the latter, the second time around is true love.

In an Instagram post celebrating their first wedding anniversary, Ronson sweetly wrote, “When people used to tell me their spouse was their best friend, i thought they were spouting hallmark nonsense or that they were some freak anomaly of love. So now i guess i’m either someone who spouts hallmark nonsense or i’m a freak anomaly of love. Or maybe i just married the most incredible human being around.” He continued, “Happy Anniversary to my darlingest, you’ve made me happy beyond my wildest.”

We couldn’t be more thrilled for the expecting couple — may their love story continue to unfold with the addition of a sweet baby to their growing family. 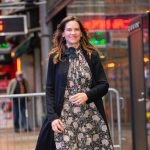 Hilary Swank Revealed The Super Meaningful Due Date of Her Twins

Before you go, check out these celebs who have such fierce pregnancy style, we can’t stop staring.