There’s no denying that celebrity kids have it good. (Beyoncé and Jay-Z’s 10-year-old daughter Blue Ivy, for example, is incredibly rich.) But that doesn’t mean they are always spoiled. Kristen Bell and Dax Shepard want to teach their daughters Lincoln, 9, and Delta, 7, a valuable lesson about gratitude for what they do have instead of focusing on what they don’t have: namely, cell phones.

“We don’t have a phone problem ’cause they’re not in the mix. And iPods aren’t, iPads aren’t in the mix and video games,” Shepard said on The Endless Honeymoon podcast, per PEOPLE. “So, there’s three things in my house that are not happening — those things. “

Lincoln and Delta are not too pleased about this rule.

“They complain about it all the time,” the Armchair Expert podcast host continued. “’So-and-so’s got it.’ And I go, ‘Yeah, but you got a swimming pool and you got a dirt bike.’”

He added that he and Bell want their daughters to experience the world firsthand. “I don’t want your focus to be on a seven-inch thing when the world is all around you,” he said.

But Shepard isn’t as strict about the rule when they are at other people’s houses. “[L]ook, you get to play with it at your friend’s house. I’m not saying you can’t play video games when you go out and about in the world. You do whatever you want to do, but doesn’t happen here. We have a bunch of other s–t that your friends are jealous of, so it’s like ‘no one gets everything’ and that.” 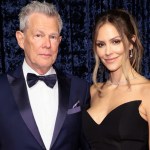 He’s also “not committing” to a certain age where they’ll allow their daughters to get phones.

“I’m not committing to that. They want me to commit to that and then I just say, ‘Well, it’s not today, and I’m not a clairvoyant, so I’m not sure when that’ll be,’” the Hello Bello co-founder continued.

But once the girls get jobs? That might be a different story. “You go out and make your own money. You buy whatever the f–k you want,” he said. “I’m not in charge of the money you make, to incentivize that pride of having made your own money. That’s up to you.”

In Oct. 2020, Bell told a sweet story about how their family practices gratitude.

“Dax has suggested a couple times, ‘Let’s just name three things we’re grateful for,’” The People We Hate at the Wedding star said at the Advertising Week 2020 virtual summit. “I am shocked at how into that our girls have gotten… We’re in the bed sometimes at night, they will say, ‘Does anyone want to talk about what they’re grateful for?’ And immediately [my] mom heart goes crazy, and I’m like, ‘Sure, if you do,’ trying to act cool.”

Even without phones, they are making plenty of memories! This summer, Shepard and Bell took their daughters to Mount Rushmore and Swan Valley, Idaho, where they went hiking, swimming in the lake, and more.

By the time they’re old enough to have phones, they’ll probably be too busy experiencing the world to spend much time on them, anyway.