Kim Kardashian and her oldest child, North West, are clearly big fans of Lizzo (I mean, who isn’t?) and they took to their shared TikTok account, @kimandnorth, over the weekend to share videos of a big night out at one of the singer’s shows in Los Angeles.

The twosome posted a pair of videos, the first being North and a friend hanging out backstage with Lizzo herself, doing a TikTok dance and laughing together. Miraculously, the Lizzo is watching and cracking up while the little ones nail the moves together.

The second video is from the venue just as the show begins, with Lizzo taking the stage in one of her iconic, sparkling outfits. Most of the audio is Lizzo’s music, though at one point North can be heard screaming the singer’s name in excitement.

North is taking to social media just like her mom, who at last count has 334 million followers on Instagram. Kim’s TikTok is growing, with 5 million followers, while her shared project with North on the platform is actually more of a phenomenon with almost 10 million.

Kim and her kids are wrapping up the year with tons of festive fun. After going big — of course — during their Kardashian family Halloween, Kim continued her dressing-up adventures by trying out a Grinch look, which was also displayed on the TikTok she shares with North.

The whole family is known for their lavish Christmases, between their annual holiday cards, legendarily extravagant seasonal decor, and grandma (er, “Lovey”) Kris’s annual Christmas Eve get-together. Last year, Kim even said that she woke her kids every morning in December with the music of a live piano player in their home. Now that says Christmas spirit! 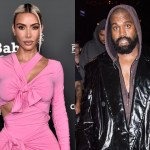 The festive season comes as Kim and her ex-husband Kanye West are still moving through some aspects of their divorce proceedings. Though they are legally single, there are still apparently some financial arrangements that need to be ironed out. It made headlines this week that Kanye missed an important legal deposition, which was instrumental to the process of him and Kim ironing out the distribution of their combined assets.

Kim’s not letting the ongoing legal negotiations get in the way of her social life, though. She’s thrown herself back into the red carpet circuit, getting glam to attend the Baby2Baby gala and the CFDA Fashion Awards in recent weeks. And it seems she’s making sure to pencil in plenty of fun for her kids, too — and rack up some cool mom points in the process.

Before you go, check out all the times North West proved ‘Shady Baby’she’s a star in her own right.