Kim Kardashian doesn’t have the time or energy to keep up with Kanye West‘s erratic behavior any longer, according to sources close to the business mogul.

Page Six reports that Kim “is so fed up with West’s behavior that she doesn’t even talk to him about their kids’ schedules anymore without a third party,” according to insiders who are in the know about the situation. One source in particular shared, “They have had zero communication in several weeks, and all communication regarding the kids’ schedules are now coordinated through assistants.”

Kim and West were seen making polite (if totally awkward) conversation last month at one of their daughter’s basketball games prior to the ongoing drama, but the two notably avoided one another at North’s most recent game this past Friday. Kim also refused to look at or talk to her ex-husband during his previous appearance at one of North’s games, during which he donned a White Lives Matter shirt again.

Kim arrived at her daughter’s sporting event with all four of her and West’s kids in tow: North, 9, Saint, 6, Chicago, 4, and Psalm, 3. West arrived by himself and left before the game ended, according to TMZ. You have to hand it to Kim for keeping it cool under the watchful public eye and prioritizing her children’s well-being — at least one of the West kids’ parents is doing so.

Before you go, check out a few of the most unique celebrity baby names. 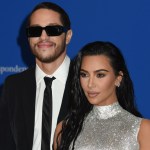