What do you do when you and your child’s parent disagree over certain parenting rules? Kanye West wants to know, as he is upset once again with ex Kim Kardashian’s parenting style when it comes to their daughter North, 8.

Kardashian posted a video of her and her daughter on TikTok Tuesday, under their joint account @kimandnorth. The video shows Kardashian and North in a pink bedroom, lip syncing to the song “This Could Be Us” by Rae Sremmurd.

Apparently, West was not happy with this video, as he posted a screenshot of it to Instagram today, tagging Kardashian and writing this caption in all caps: “SINCE THIS IS MY FIRST DIVORCE I NEED TO KNOW WHAT I SHOULD DO ABOUT MY DAUGHTER BEING PUT ON TIK TOK AGAINST MY WILL ?”

This isn’t the first time West has complained about North being on TikTok. Last month, after claiming security wouldn’t let him into Kardashian’s house, he said he sent his cousins to go in and talk to Kardashian to say: “‘Don’t have my daughter wearing lipstick on TikTok or don’t have her on TikTok at all if I don’t approve that.’ And I said it after that was done without me knowing, and then it happened again.”

In January, West also publicly complained about Kardashian when he claimed she didn’t invite him to their 4-year-old daughter, Chicago’s, birthday party. The two also share sons Saint, 6, and Psalm, 2.

For her part, Kardashian is tired of West’s antics. The Skimms founder responded to his attack on Instagram today, posting a long note to her Story. 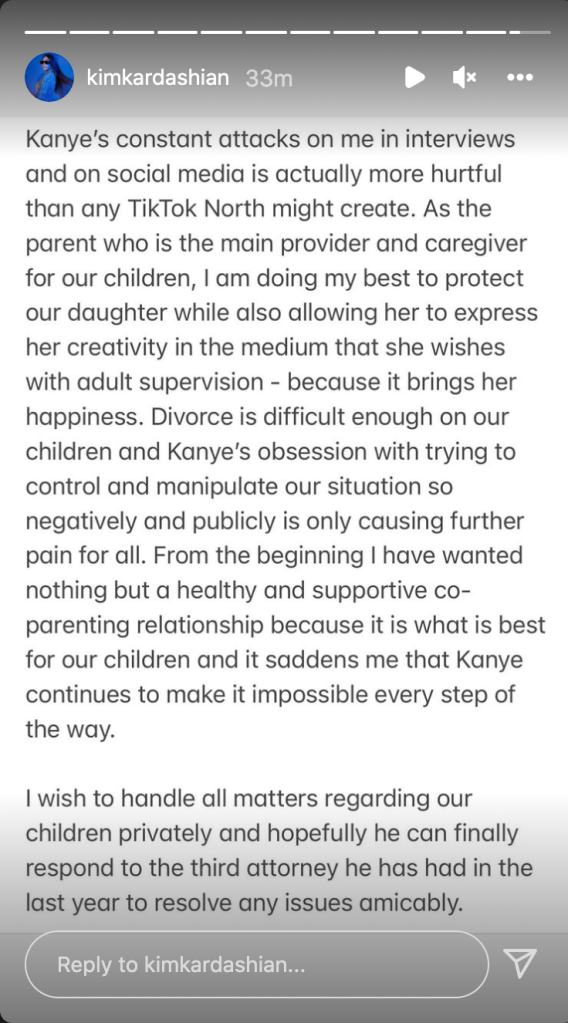 “Kanye’s constant attacks on me in interviews and on social media is actually more hurtful than any TikTok North might create,” she wrote. “As the parent who is the main provider and caregiver for our children, I am doing my best to protect our daughter while also allowing her to express her creativity in the medium that she wishes with adult supervision — because it brings her happiness.”

Kardashian continued, “Divorce is difficult enough on our children and Kanye’s obsession with trying to control and manipulate our situation so negatively and publicly is only causing further pain for all. From the beginning I have wanted nothing but a healthy and supportive co-parenting relationship because it is what is best for our children and it saddens me that Kanye continues to make it impossible every step of the way.”

At the end, she added, “I wish to handle all matters regarding our children privately and hopefully he can finally respond to the third attorney he has had in the last year to resolve any issues amicably.”

According to TMZ, Kardashian has filed to be legally single, separating the issues of child custody and property from marital status. She is ready to move on, privately, while West is trying to air their issues out to the world as much as he can, which has got to be frustrating. Coparenting is never easy, and we wish them the best!

Check out these celebrity couples who’ve used a surrogate.