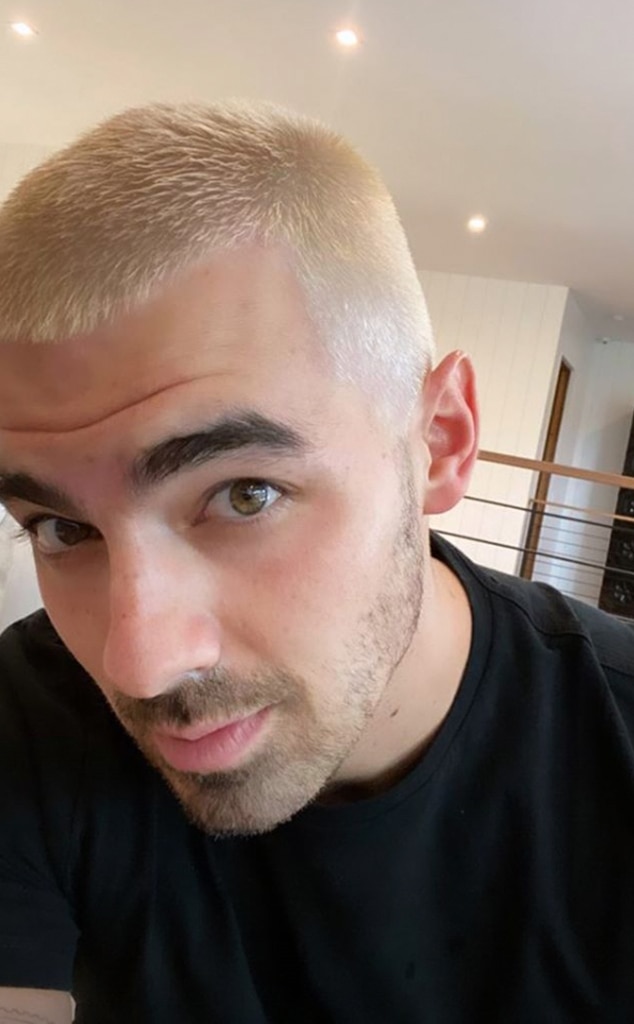 Joe Jonas took to Instagram Wednesday, Aug. 19 to show that he switched up his style. The singer posted a selfie that revealed he had ditched his dark locks for a platinum blonde look.

The hair transformation came just a few days after the Jonas Brothers band member celebrated his 31st birthday. It also came less than a month after Jonas and Sophie Turner welcomed their first child. While the "Sucker" celeb and the Game of Thrones star have not shared any details or photos of the child, TMZ reported the 24-year-old actress gave birth to a baby girl named Willa in July.

Of course, it shouldn't surprise fans that the proud parents want to protect their child's privacy. After all, the two didn't publicly comment on the pregnancy the entire time Turner was expecting. However, a source told E! News earlier this year the stars were "extremely excited" to become parents.

So, what has this new chapter been like for the family of three?

"They are home and getting settled," an insider told E! News back in July. "Joe is very hands-on and involved. He wants to do everything he can and loves being with the baby and helping Sophie. They are both so excited to be parents. They have been texting pictures to friends and calling on FaceTime to show her off. Everyone is very excited for them."

Jonas isn't the only celebrity to recently debut a new ‘do. To see more stars' at-home hair transformations, check out the gallery below.

"Pink is punk," the supermodel shared on Instagram after celebrity hairstylist Guido Palau helped "direct my dreams of going pink."

"Hello Merpeople. Rocking color by @fredericaspiras named after his mother who just passed…Suzie's Ocean Blonde. I love you Freddie," the music superstar shared on Instagram. "This was extra special glamour with love." Hairstylist Frederic Aspiras used Joico products to complete the look.

The Queer Eye star made his 4.5 million Instagram followers do a double-take after he debuted his buzzcut.

The actress debuts platinum blonde hair after rocking red hair for a few months. "Winter Is Coming," she captions her Instagram.

The NBA star shows off his fiery red hair on social media over the weekend. "When they think they know—switch it up," he captioned his Instagram post that revealed his major transformation.

The Lover singer recently showed off a fun, flirty and whimsical ensemble and beauty look that will make you dream of summer. She appeared to dye her hair with a few of her stands looking blue and pink.

The actress debuts a major hair change, one that she did herself! "That's 2 years of physical, emotional, and spiritual growth that I cut off right there on my bday," she shared on Instagram, alongside a pic of her holding up her locks.

With the help of his wife Katherine Schwarzenegger, the Parks and Recreation alum got a "damn good" haircut as the parents-to-be continue to practice social distancing.

The country singer participated in Schick Hydro's #ShaveFromHome challenge to help raise money for out-of-work barbers during COVID-19. With the help from his Schick Hydro5 Sense Hydrate and Schick Hydro Groomer, Chris showed off his transformation on Instagram.

The Cruel Intentions actress took to Instagram to show off her new hairstyle. "Rose all day," she captioned her video.

The Deadpool star is growing out his hair. And because his wife, Blake Lively, trolled him about his new hairstyle… he made fun of her right back.

The Jersey Shore alum makes fans lose their minds over his "quarantine beard."

"I decided dealing with hair was superfluous during these times of quarantine," the Mr. Big star wrote.

The Voice host pulled one over on fans by pretending to shave his head live on the Today show.

Notice anything different? The actor shows off his major transformation, which entails a mohawk and horseshoe mustache. "Killing the game," he quips on Instagram.

The Lizzie McGuire star said goodbye to her signature blonde locks and opted for a bold blue look.

The Riverdale star and his brother both agreed to shave their heads to help raise funds for Charity Water.

The Spanish singer-songwriter showcased her new bangs in the middle of self-quarantine.

"Get a load a dis," the "thank u, next" singer shared on Twitter when showcasing her new curly hair.

Who's ready for a quarantine mullet update?! "@Gwenstefani has decided to take it to the next level.. Stripes," The Voice coach shared on Twitter.

"The smile of a girl who just did at home hot pink highlights because what else can I do right now!" the 911 on Fox star wrote on Instagram. "Thanks @limecrimemakeup these hair conditioners are easy and so fun! @nikkilee901 don't be mad lol. I really miss you!"

In an Instagram Story, Nicola Peltz got to work on cutting her boyfriend's haircut. The results turned out a-okay.

"Hello grays. No getting my hair done during #socialdistancing, and I'm okay with it!" The Real co-host shared on Instagram.

A shaved head has never looked so good on the Colombian singer. Nice cut, dude!